The Galaxy Tab S6 is a beautiful piece of hardware, akin to a high-end Galaxy phone like the Galaxy Note 10. So is it the best tablet to buy? We review to find.

Earlier in the year, Samsung launched the Galaxy Tab S5e to take on the iPad Mini and iPad Air. The Galaxy Tab S6, that it has launched now, is Samsung’s latest shot at taking on the iPad Pro. Quite obviously then, the Galaxy Tab S6 has been designed for immersive multimedia consumption, but more importantly, it has been designed to transform into a makeshift 2-in-1 laptop or personal computer when need be. Just to accentuate its productivity focus, Samsung has also launched a keyboard folio accessory alongside with physical function keys and an ‘actual’ trackpad.

Performance – fastest Android tablet you can get 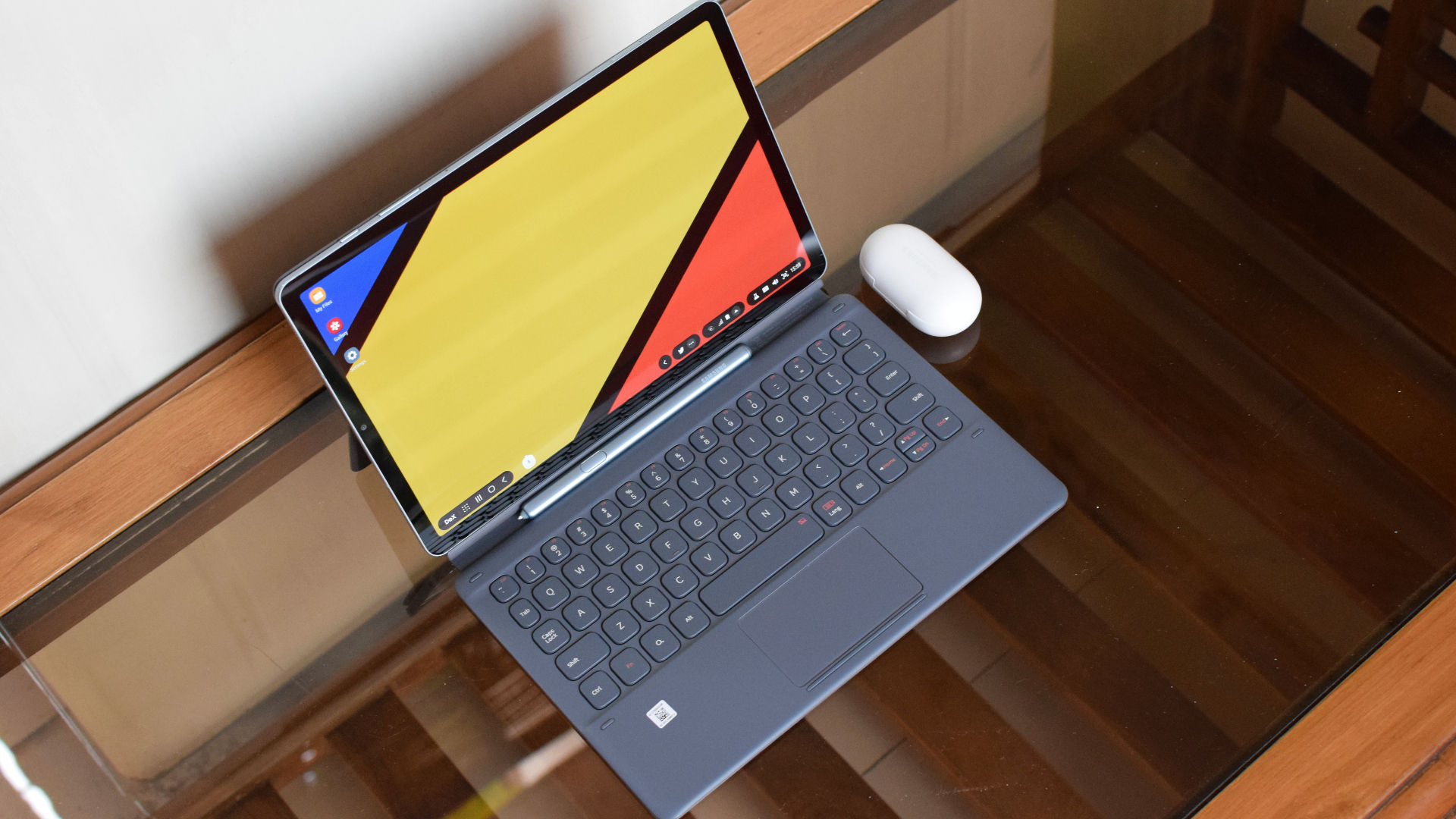 The Galaxy Tab S6 solves one of the biggest shortcomings of the Galaxy Tab S5e. It has ‘significantly’ more powerful hardware. The Galaxy Tab S6 is in fact the most powerful Android tablet that Samsung has ever made. At its heart, the Galaxy Tab S6 has Qualcomm’s flagship Snapdragon 855 processor. This is paired with generous 6GB RAM and 128GB storage. There’s also a micro-SD card slot for storage expansion – something that the iPad is lacking.

The effect of such a potent hardware setup is immediately visible. The Galaxy Tab S6 is visibly faster than the Galaxy Tab S5e in every sense of the word. The thing literally flies through everything – both basic and hard grinding. It’s a pleasurable experience sailing through basic day-to-day tasks as well as graphics intensive ones like say, high-end gaming. Samsung also made a point to collaborate with Adobe on a ‘customized’ version of the Premiere Rush app that’s easily a dream for light – but effective - video-editing on the go on the Galaxy Tab S6’s wide expansive display. Speaking of which, the Galaxy Tab S6 has a 10.5-inch Super AMOLED display with a 2560x1600 pixel resolution and 16:10 aspect ratio – just like the Galaxy Tab S5e. There’s no doubt that the Galaxy Tab S6’s display is as good as it gets in the industry – it is one of the most beautiful screens around on any gadget today period. Samsung has also tried to keep the bezels in check on all sides, so there’s simply lots of real estate to feast your eyes on. This is a display you’d absolutely love to watch content on.

But is it as good as the iPad Pro’s? Yes and no. While Samsung’s AMOLED panel in the Galaxy Tab S6 is without a doubt class leading in terms of brightness and contrast, the iPad Pro’s Liquid Retina display is simply more pleasing to the eyes courtesy Apple’s ‘adaptive’ True Tone technology - plus, it’s faster because it’s capable of rendering images 120 times per second, courtesy Apple’s ProMotion technology.

There’s also the aspect ratio juggernaut. The iPad Pro’s 4:3 aspect ratio is better suited for more effortless productivity. The Galaxy Tab S6’s 16:10 aspect ratio will be better for multimedia consumption – it will be sort of cramped when have multiple windows open and are trying to make your way through them to get work done. This is a decision that you’ll have to take depending on your use case. 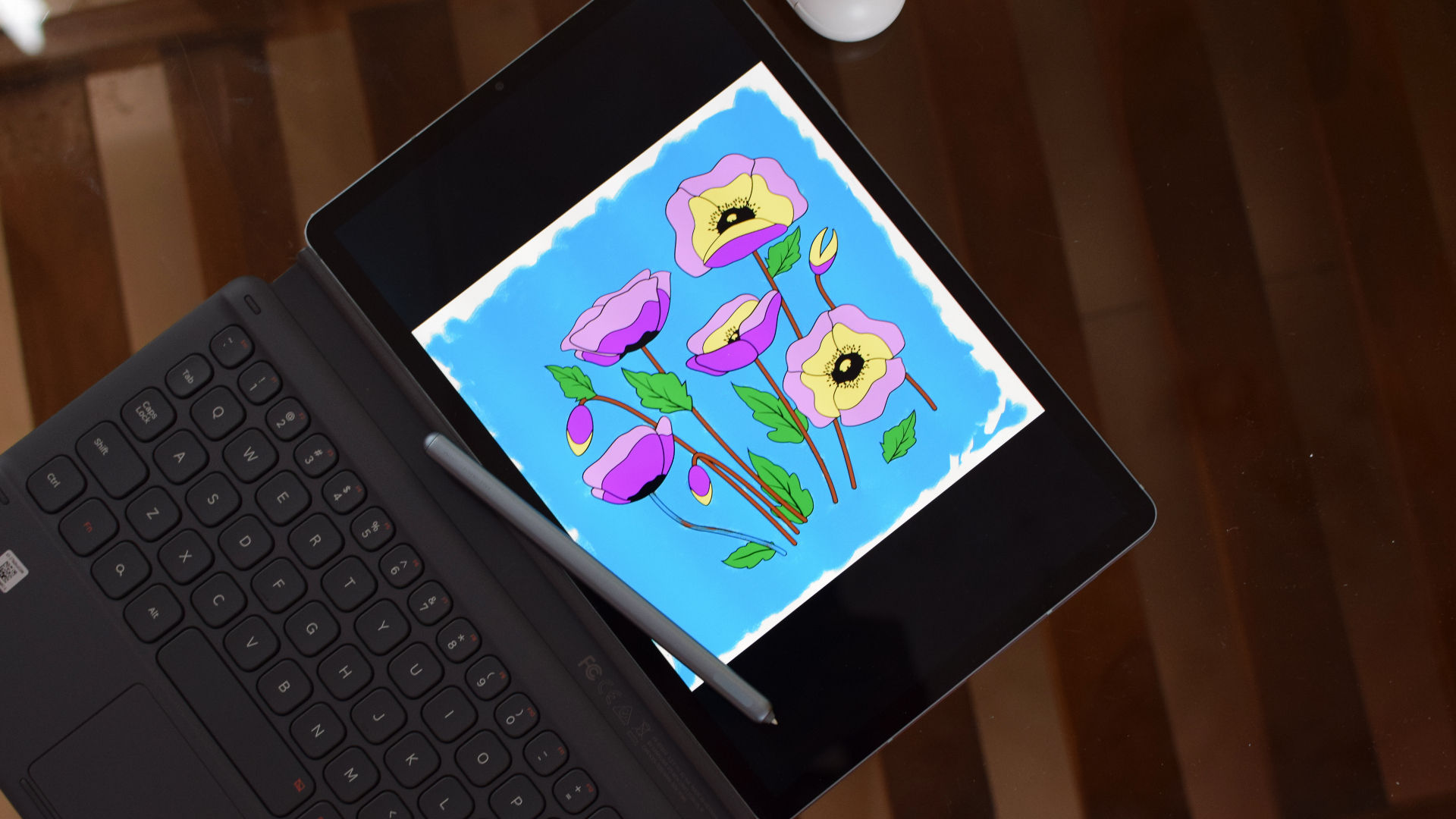 Unlike the Galaxy S5e, the Galaxy Tab S6 ships with a bunded S-Pen stylus accessory. Even the iPad Pro does not include one in the box.

Samsung is using the same Bluetooth tech inside it as the S-Pen that comes with the Galaxy Note 10 so you’ll be able to use it as a remote control to shuffle music, take photos, so on and so forth. When attached, the tablet will wirelessly charge the thing in just 10 minutes.

The S-Pen may lack the pen-perfect ‘fluidity’ of Apple’s Pencil, but it can get very close. It’s the only Android stylus that can come close to Apple’s in terms of mimicking an ‘actual’ pen. Plus, its air gestures maybe fun to play around with from time to time. The Galaxy Tab S6 isn’t the thinnest and lightest tablet in Samsung’s portfolio – that will be the Galaxy Tab S5e – but it gets very close. The design, in fact, is very similar. The Galaxy Tab S6 has an all-metal unibody chassis (and it has a near all-screen display). The tablet comes in Mountain Gray and Cloud Blue colour options in India.

There are dual 13MP+5MP cameras on the back. And there’s a pen-shaped indentation below this module – to magnetically attach the bundled S-Pen stylus.

Samsung has also launched a new keyboard folio with the Galaxy Tab S6. It’s safe to say, that’s its biggest headlining feature. It isn’t bundled in the box sadly, so that’s a bummer. It isn’t any different from Apple, so that’s that.

Samsung’s keyboard folio has two parts, there’s a back cover and keyboard. Both are separate entities, and both connect differently with the Galaxy Tab S6. While the keyboard bit attaches to the tablet through magnets and a pogo pin connector, the back cover is attached to the tablet by an adhesive strip. The back cover is designed to stay attached to the tablet always – pulling it off frequently may render it unusable over a period. This serves two purposes - protecting the S-Pen through its dedicated slot and propping up the tablet and view content at any angle, sort of like a Surface. The keyboard is meanwhile designed to attach and detach depending on need.

Coming to the keyboard itself, not only does it have function keys, there’s also a trackpad included – both of which were missing out on the last-generation version. Samsung’s keyboard for the Galaxy Tab S6 supports a variety of keyboard shortcuts while the included trackpad is a godsend for multitasking. 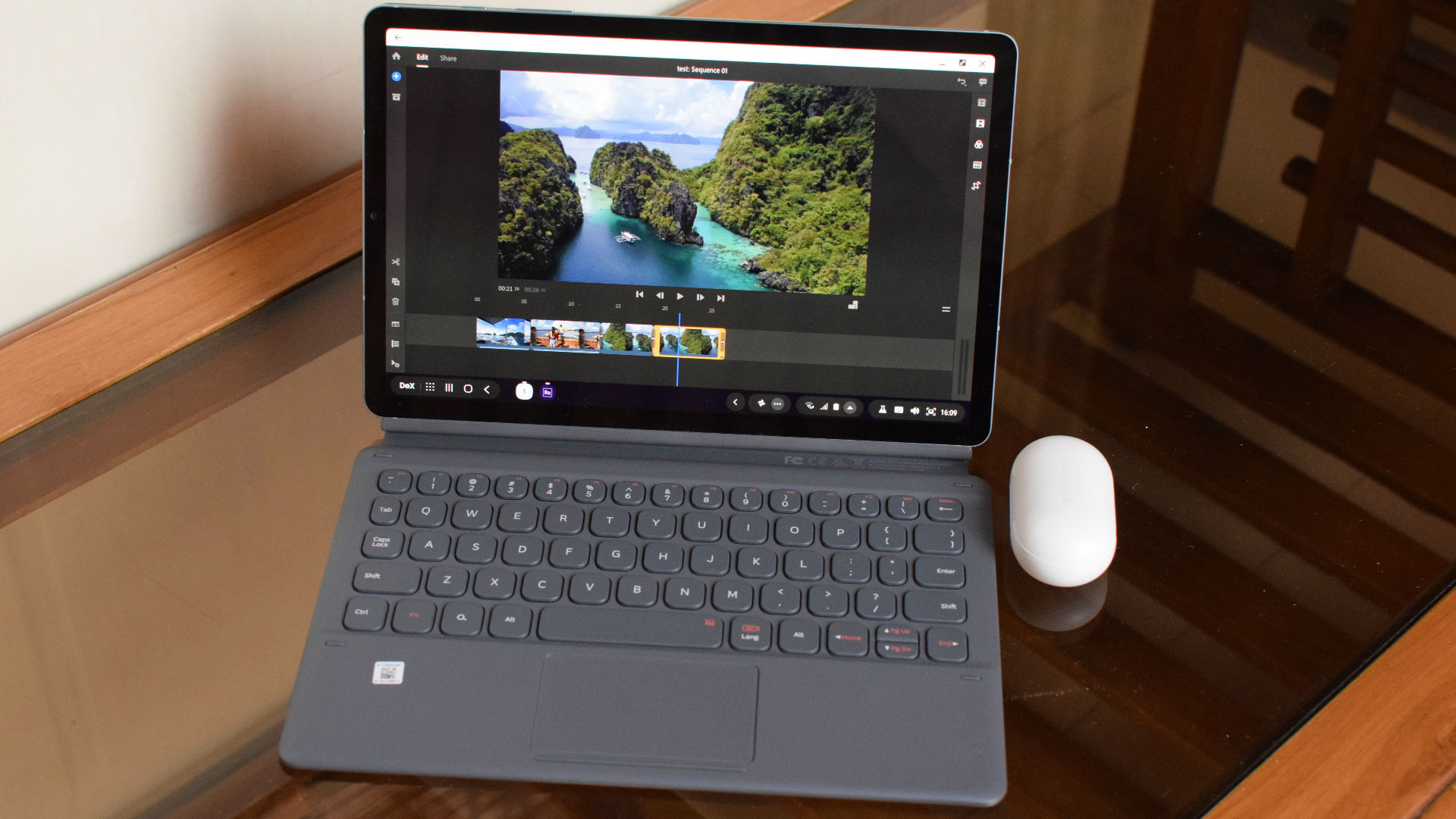 The Galaxy Tab S6 runs the same software as the Galaxy Tab S5e, which is Android 9 Pie-based One UI. Since everything inside is literally the same, I'll leave the link to my Samsung Galaxy Tab S5e review here, for you to get acquainted.

The TL; DR version is, just like the Galaxy Tab S5e, the Galaxy Tab S6 also tries to offer two distinct styles of user experience - the traditional tablet Android and a near desktop Android courtesy Samsung’s DeX mode. And, even with all that good hardware, the all-round experience remains ‘all over the place’ because well, the Galaxy Tab S6 is an Android tablet and Android doesn’t usually play well with the tablet form factor – to this day. There’s a reason even Google has given up on it.

But here’s the thing. I really like Samsung’s DeX mode. I think that it has come a long way. It’s very useful too, from time to time. It’s probably the most useful thing to have ever happened to an Android tablet. And I must say Samsung’s new keyboard folio also gave me a lot of hope. Oh, the possibilities that come when you have function keys, a trackpad for ‘mousing around,’ and shortcuts, can you really blame me for getting excited? Sadly, an accessory is only as good as the software and while Samsung has tried its best to make Android make sense on a tablet, there’s only so much it could have done.

That’s just the tip of the iceberg. There are many more instances where the whole thing feels incoherent, simply because traditional tablet Android and near desktop Android seem to be at loggerheads with each other trying to prove a point. When at the end of the day, the two must be working together to compliment the beautiful hardware that is the Samsung Galaxy Tab S6. A few more quick pointers on the Galaxy Tab S6:

Should you buy the Samsung Galaxy Tab S6? 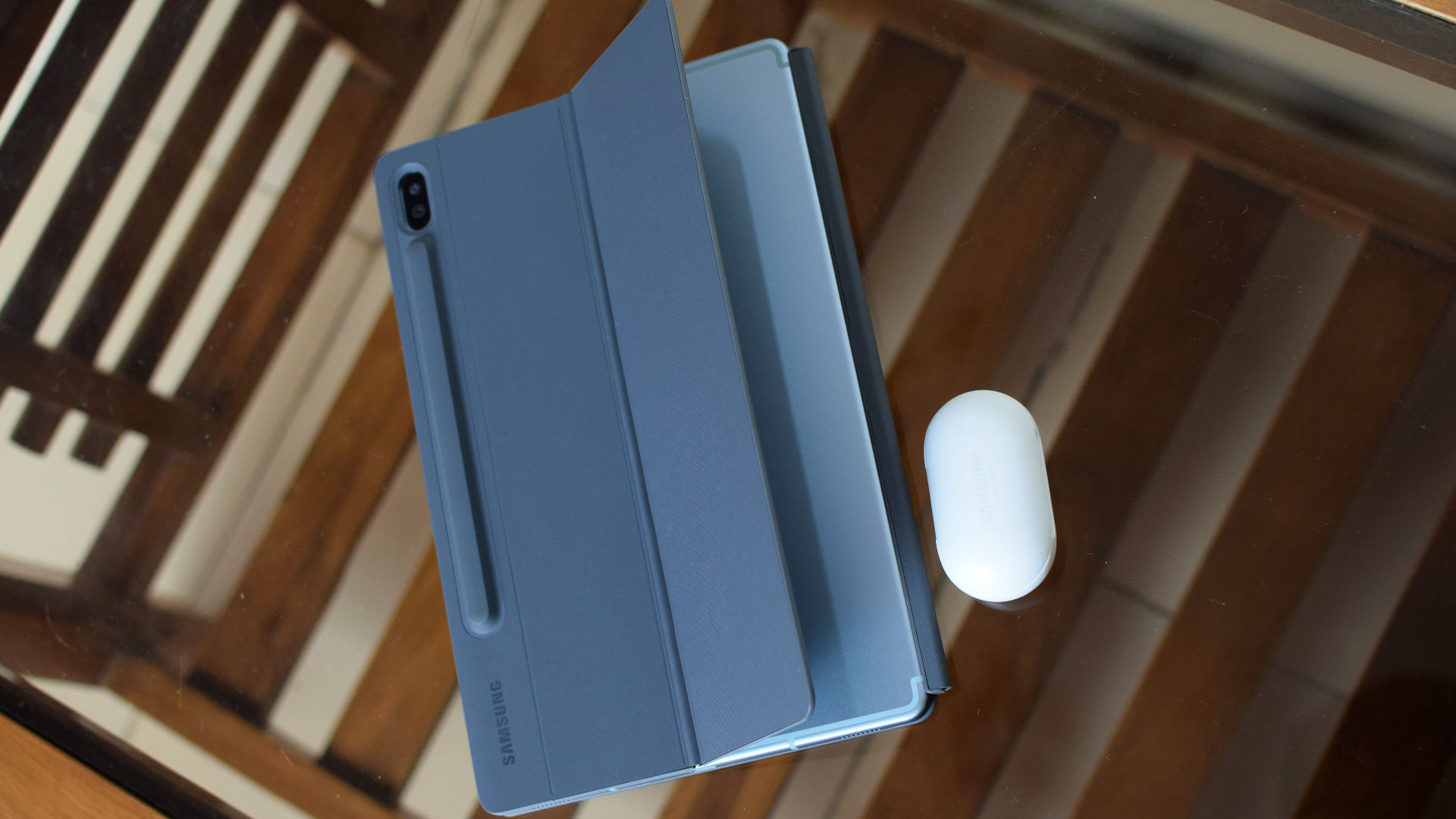 There are two things to know about the Galaxy Tab S6. It’s a beautiful piece of hardware, akin to a high-end Galaxy phone like the Galaxy Note 10. It’s both well-made and practical – even futuristic to some extent. But also, it runs Android, and it’s not really a match made in heaven.

If you’re someone who’s looking to get a high-end Android tablet with multimedia consumption as top priority, you can’t go wrong with the Galaxy Tab S6. That it can do some degree of productivity from time to time is just an icing on the cake. But even the much more affordable Galaxy Tab S5e can do that.

Question is, why would you want to get just the icing, at this price, when clearly the iPad Pro offers a more cohesive experience. Unless of course, you’re into Android.

PEOPLE HAVE PLEDGED SO FAR
Upcoming smartphones and gadgets in 2020 that will leave tech geeks excited
Mac shortcut keys that will help improve your productivity at work
CES aims to offer a glimpse of the Future of TV in 2020
What is IE error in washing machine? How to solve the IE error code in your LG machine
Honor Magic Watch 2 launched in India starting at Rs 12,999, touts 2-week battery life
DO NOT MISS
AKHILESH VISITS AZAM KHAN IN JAIL
JUSTICE S. MURALIDHAR ON TRANSFER
BREACH OF PROPRIETY OR CONVENTION?
DELHI VIOLENCE: CRIME BRANCH FORMED
SHOCKING FINDINGS AT TAHIR'S OFFICE
SONIA GANDHI MEETS PRESIDENT