American Tech giant Apple has announced the launch of the iPhone 13 series equipped with an A15 Bionic chipset capable of 15.8 trillion operations per second 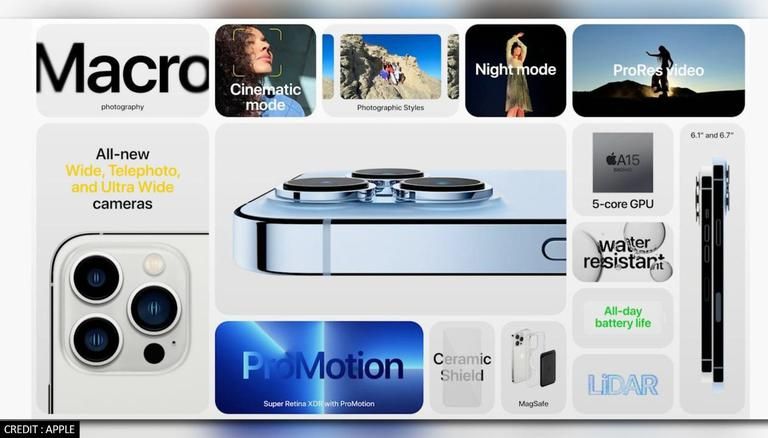 The new iPhone 13 comes with an A15 Bionic chipset which has a 4-core GPU. The chip is also made up of a 16-core Neural engine for machine learning tasks. Apple claims the chip is 50% faster than its competitors.

The iPhone 13 has a 6.1-inch display area, bigger than the previous generation phones. Apple claims that the latest model of iPhone has the most secure facial authentication feature in a smartphone.

The iPhone 13 notch is 20% smaller and it comes with all the Face ID sensors packed in a smaller space. It comes with 1200 nits brightness and a brighter XDR display.

The phone’s camera setup has also seen major upgrades. iPhone 13 comes with a diagonally arranged camera lens with a larger sensor to capture 50% more light for better Light mode shots. A Cinematic Mode is also available in the camera’s video mode for filmmakers. The Camera system captures each frame in Dolby Vision for maximum video quality.

Like its elder sibling, the iPhone 13 mini features Apple's latest system-on-a-chip, the A15 Bionic. The 5nm chip consists of a 6-core CPU - 2 high-performance and 4 high-efficiency cores. The chip is capable of 15.8 trillion operations per second, making the phone super fast.

Apple claims the battery life is noticeably improved on its latest iPhones. Compared to its predecessor, most users can expect a half-an-hour of additional battery life from the iPhone 13 mini. Thanks to the A15 Bionic chip for the increase in uptime.

iPhone 13 mini doesn’t feature the ProMotion display found on the iPhone 13 Pro and Pro Max but it does feature a 5.4-inch OLED display. The OLED display is 28% brighter and features a peak brightness of 1,200 nits.

For photos and videos, the iPhone 13 mini features a more capable dual-camera array, while its primary 12-megapixel sensor can capture 47% more light. With its A15 Bionic chip, the iPhone 13 mini camera also comes with a 'Cinematic mode' that allows you to blur the background of a video while the subject stays in focus.

Like the iPhone 12 mini, the 13 mini includes Apple’s ceramic shield technology, which makes the phone’s screen more resistant to damage from drops.

Apple’s iPhone 13 Pro’s new screen has been upgraded to enhance the gaming experience. Due to its advanced chipsets, Apple claims their iPhone 13 Pro to be the most powerful smartphone to exist. A new 1TB variant of the phone will be available for purchase. The phone’s camera setup has also received an upgrade.