As per the Counterpoint study, India witnessed the highest ever online smartphone shipments during the Q3 2019. Everything you need to know about the report. 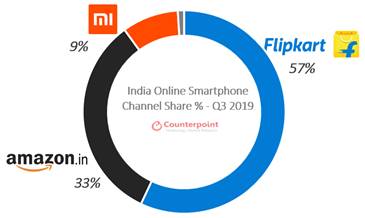 -- In terms of brands, Xiaomi retained the top spot with 38 per cent of the share, courtesy of Redmi 7A, Note 7 Pro and Note 7S models.

-- Festive offers significantly brought down the entry-level price-point of Xiaomi Redmi series to Rs 5,000 leading to a strong uptick on Amazon.

-- Vivo became the number four player in the online segment for the first time ever, courtesy of Vivo U10, Z1X, and Z1 Pro models.

-- Online shipments in the premium segment reached a record high with 79% YoY growth.

-- OnePlus emerged strongly on Amazon and remained the best-selling in the online premium segment.

READ | With 511% annual growth, is Realme emerging as the king of India's smartphone market?

According to research firm CMR, Realme along with OnePlus, Vivo and Oppo had a combined market share of 42 per cent in India's smartphone market between July - September 2019. While Xiaomi remains the market leader, with one in four users purchasing a Xiaomi smartphone (26 per cent share), CMR said.

During the Q3 2019, India's smartphone market saw an 8 per cent increase in terms of sale. CMR said that 8 out of 9 smartphones shipped in India were sold by the top five smartphone vendors during the stipulated period.