Samsung has been bending displays for so long now, it’s frankly surprising that the catchphrase ‘bend it like Samsung’ never really caught on. Be that as it may, there’s little doubt that, no one bends it like Samsung. Period.

But while in the past, Samsung’s attempts at bending its smartphone displays were largely centered around aesthetics – guised under the argument of ‘more’ screen real estate – truth is, they didn’t serve any significant real-world purpose. Samsung probably knew that too and much like any other legacy brand of its stature, it did not stop at mere aesthetics. The goal was to make something more useful.

The Galaxy Fold is the first step in that direction and while it surely isn’t perfect, it feels just right – it feels like the future. I’ve been using the Galaxy Fold as my daily driver for a week now and here’s what I think about it – this changes everything.

Samsung says the Galaxy Fold is “a meticulously crafted luxury smartphone that unveils a new era of smartphone design,” and one couldn’t agree more. While structurally it would remind you of the Nokia Communicator, the Galaxy Fold is a whole new breed of foldable - one in which Samsung has been able to fully bend the display, rather than stapling two in the middle.

The idea seems simple on paper. The Galaxy Fold has been designed to give users access to two ‘distinct’ categories of devices - a 7.3-inch primary tablet kind (something like say the iPad Mini) and a smaller 4.6-inch phone form factor – all in one device. 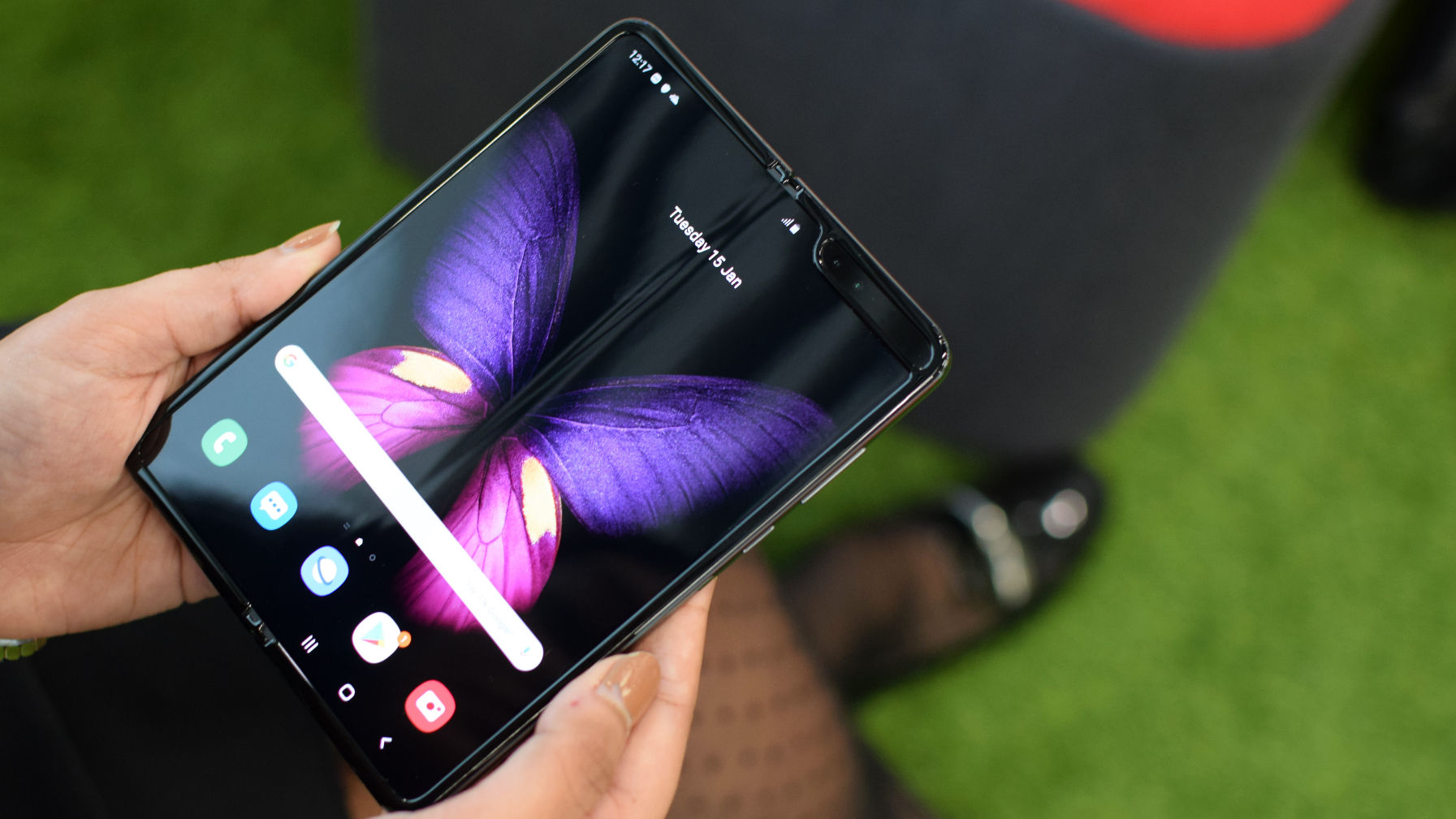 Like a book, the Galaxy Fold has a spine or hinge in the middle, but there is no partition on the inside since Samsung’s flexible OLED or Infinity Flex simply passes through. There’s a secondary cover display on the other (outer) side, that allows you to continue using the device as a makeshift smartphone for when it is folded.

There’s something very satisfying about unfolding the Galaxy Fold – and then folding it back as it snaps together. It's a very confident snap too. Very solid. Not everybody will be able to put it in their pocket and that makes sense. The kind of demographic that Samsung is looking to target here – the executives and the CEOs and some early adopters – are supposed to have deep pockets anyways. And even then, the Galaxy Fold is the kind of device they would want to show off. And man, the kind of attention that this thing commands – it's simply hard to ignore.

The Galaxy Fold exudes luxury from the get-go – no wonder, Samsung is offering deliveries through a concierge. It’s not pretty, but as I mentioned earlier, this thing feels like the future.

As for usability, well let’s just say, I have mixed feelings – but mostly they are positive. The inner screen which is the main screen is plastic – no one's been able to bend glass that way yet – and there’s a distinct crease at the center where the it folds. You may be able to not see it while watching content but it’s there all the time – and you will see it when the screen is off.

That’s something that you’ll have to get used to, the way you get used to display cutouts. Speaking of which, there’s a thick notch at the top left, that you can’t also ignore. Especially while watching content.

Coming to the outer screen, it’s sharper, but it’s largely unusable because of the size and aspect ratio. At best, you can use it to view the time, make phone calls, and check your notifications – that's about it. Samsung is very clear about letting the end-user know, they must handle the Galaxy Fold with care. For this may be the future, but the future is also fragile.

-- The main display is unlike any other out there. It’s not as smooth as regular glass, which means there’s some friction involved when you interact with it. It’s also highly susceptible to dust. So, you must get used to that, and be patient with it. A tight press, or an odd fingernail scratch may render the Galaxy Fold’s main display unusable.

-- Since the Galaxy Fold folds inwards, it doesn’t fold flat as say the Huawei Mate X. There’s some space between the hinge and body every time you fold it, which means you must be careful about any debris from entering and rendering the Galaxy Fold’s main display unusable.

-- The Galaxy Fold isn’t certified for any sort of water and dust resistance like other Samsung high-end flagships like the Galaxy S10 and Galaxy Note 10, so that’s that.

If you're gonna play the game, you gotta learn to play it right

Being a high-end Galaxy device means Samsung hasn’t cut any corners with the Galaxy Fold – except that it does not have a headphone jack, storage expansion and IP rating. 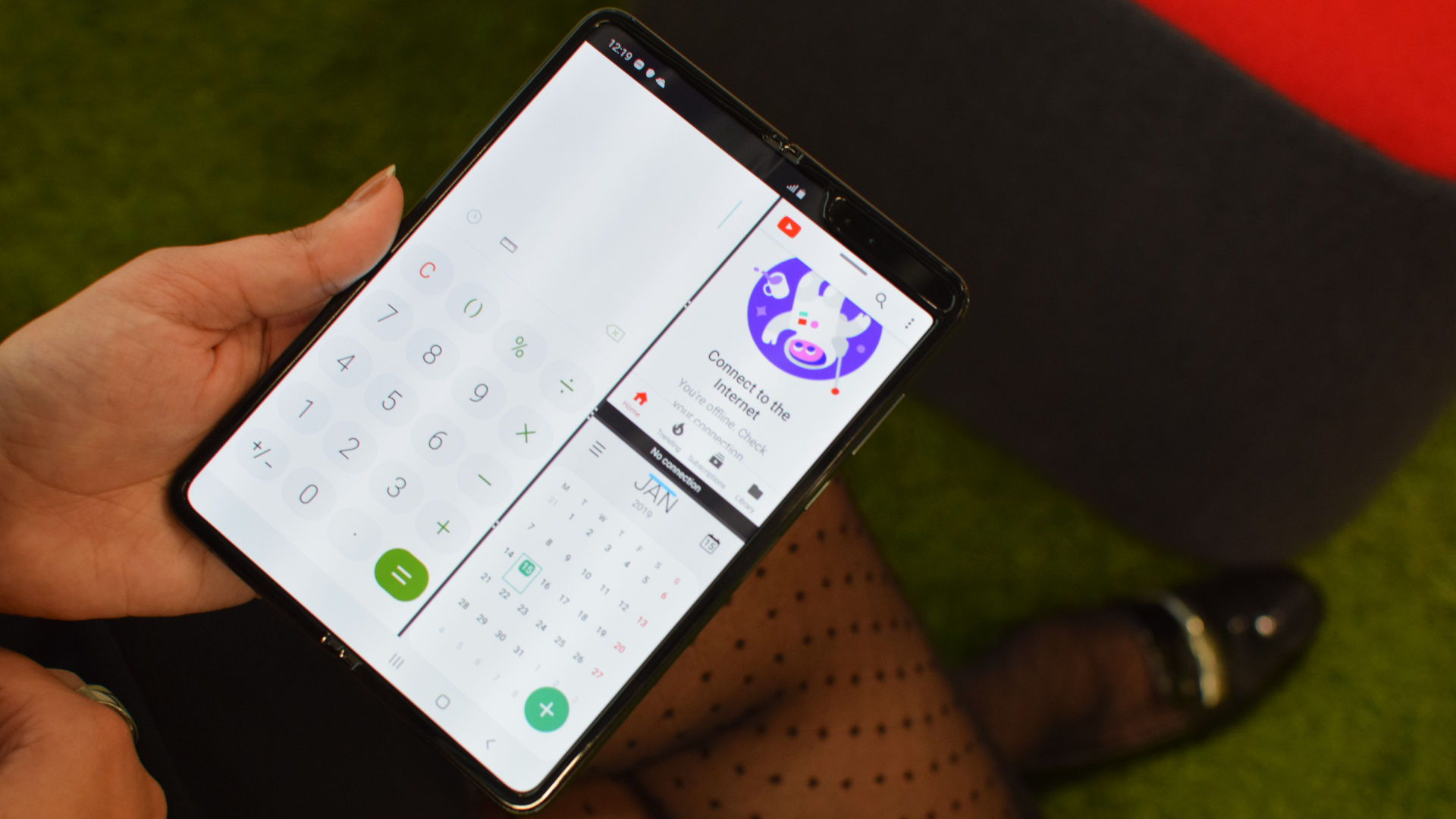 But the real star of the show here is the software experience. Building a foldable is one thing, building an experience is another. You can make as many foldable devices as you want and you can pack them with top-tier hardware too, but no one’s going to bother if the user experience is lacking. Samsung says it has worked extensively on the software side so users will be able to seamlessly transition between smartphone and tablet mode on the Galaxy Fold. Samsung is particularly touting app continuity and the ability to run as many as three individual apps simultaneously.

Samsung’s app continuity feature works as advertised. This means if you have an application open on the outer screen, it will be right there on the inner screen when you unfold it, and it will be there fully resized for that form factor. This will be of course dependent on the app as well. There will be instances when an app – especially games – will need to shut down and reopen to adapt to the newer aspect ratio. This is something that I got used to over time.

Running three apps together on the main display also works like a charm – those looking for more, can of course, use Samsung’s floating multi-windows. Quick pointers on the Galaxy Fold as an everyday phone:

-- It really helps that Samsung isn’t using its tablet Android software in the Galaxy Fold and making it adapt to different form factors – that would have been just wrong. It’s using smartphone Android software – which is Android 9 Pie-based One UI – which has the right tools to adapt more seamlessly. And it’s only going to be better with Android 10 which packs the necessary APIs to make a case for foldables.

-- Flagship-grade hardware ensures everything works seamlessly and without any visible lag.

-- The same is true about the Galaxy Fold’s cameras. Samsung has ensured you’re ready to point and shoot, from any screen, and the quality of the pictures (and videos) taken from the Galaxy Fold are in line with what we’ve seen with the Galaxy Note 10 and Galaxy S10 before it. Because well, it has the same cameras and very similar processing algorithms.

-- The Galaxy Fold comes with high-quality dual speakers that can get quite loud with good stereo separation.

-- Phone calls made with the Galaxy Fold are of good quality across the board – there’s nothing really to complain here. The Galaxy Fold supports single SIM only.

-- The Galaxy Fold has fantastic battery life. Even though it has a battery capacity comparable to the Galaxy Note 10+’s, battery life is much better. The Galaxy Fold is easily a one-and-a-half-day phone. I have been averaging around 9-10 hours of screen on time almost consistently on this one which is nothing short of phenomenal. The Galaxy Fold supports 15W fast wired and wireless charging, and also Samsung’s PowerShare which allows it to wirelessly charge other compatible devices.

Should you buy the Samsung Galaxy Fold?

The Samsung Galaxy Fold is the future of all smartphones. Or at least, this is what all smartphones should aspire to be in the days to come. It isn’t there yet, and I will not recommend all of you to invest Rs 1.65 lakh on it, but if you do, chances are you won’t even care about the whole back story. You’ll be in it for the experience. That experience, for the lack of a better word, will be magical. 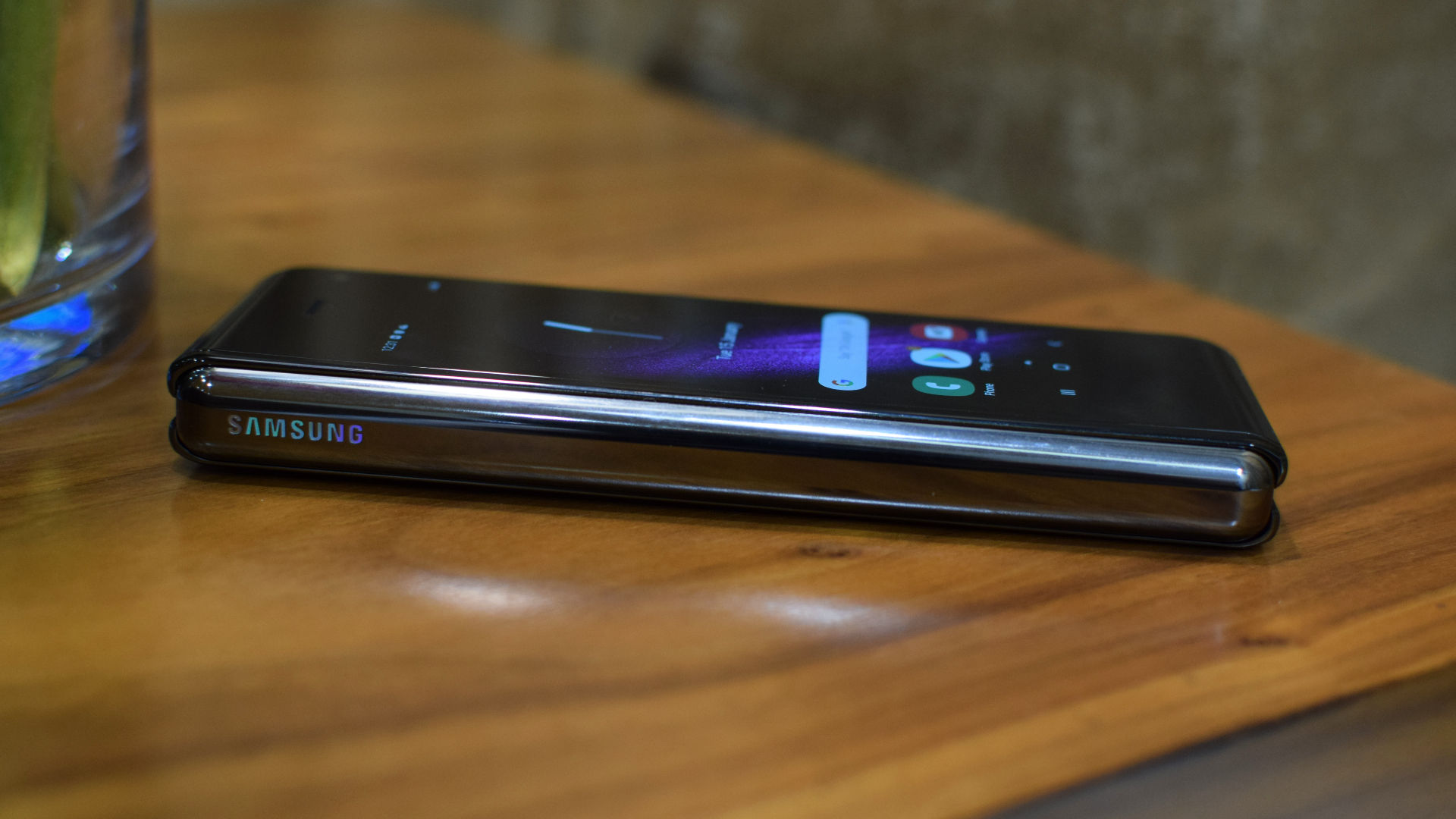 Yes, the price is on the higher side right now, but so is the kind of technology involved. The Galaxy Fold belongs to the first wave of foldable devices – it is the first foldable to launch in India – and making a foldable device doesn’t come cheap. Possibly in the days to come, with more advanced technology, brands like Samsung may be able to make these things more affordable – but that will happen when it will happen. The same is true about the Galaxy Fold’s longevity aspect. It has had a rocky start but, Samsung has been able to fix it in time for a consumer release – at least in India.

Also Read:  Samsung Galaxy Fold In Pictures: A Sneak Peek Into The Future