Russian brand Caviar known for its limited edition take on world famous smartphones apparently thinks Samsung’s infamous Galaxy Fold is in dire need for a makeover. Already. Even though Samsung has technically pulled the Galaxy Fold from the market – after many reviewers found serious problems with the phone’s foldable display – and we don’t even know if it would ever make it back, Caviar clearly sees light at the end of the tunnel.

Taking inspiration from the recently concluded Game of Thrones series, Caviar has announced a limited-edition Samsung Galaxy Fold that celebrates George RR Martin’s critically acclaimed books including the yet-to-release ‘The Winds of Winter.’ Needless to say, there’s lot of action happening here – with dragons and whatnot – all in one Samsung Galaxy Fold frame. And there’s gold, lots and lots of it all over the phone – in typical Caviar Fashion.

Caviar seems to be taking the inspiration really seriously, for only seven units of its Game of Thrones inspired limited edition Samsung Galaxy Fold will ever be made (and sold) - to commemorate the seven houses in Game of Thrones. All that inspiration will unsurprisingly cost you a fortune – the limited-edition Samsung Galaxy Fold will sell globally for a price of a whopping $8,180, that roughly translates to Rs 5,70,352 (minus necessary taxes). 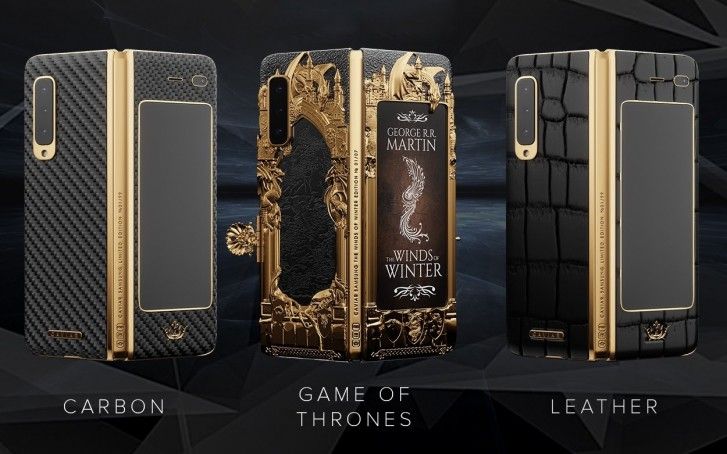 The only problem is, Caviar isn’t sure about shipping – because well, even Samsung isn’t sure whether the Galaxy Fold will ever make it back to the market (anytime soon). Possibly realizing what’s at stake here, Caviar has now taken down the listing after initiating pre-orders. Caviar previously noted that “the start of sales will begin with the opening of the official Samsung Fold series.”

The Galaxy Fold was seemingly pulled off the shelves ahead of its scheduled April 26 launch after many review units of the foldable started breaking – either because of debris that made its way inside from under the exposed areas of the hinge, or when the top protective layer of the main display (which looked like it was a screen protector) was peeled off.

Samsung recalled all the review units and started an internal investigation to find out the root cause(s) of the problem. Only recently, Samsung came up and announced that it will cancel all pre-orders if it failed to ship the Galaxy Fold by the end of May – unless, those who pre-ordered were willing to stick around.

Samsung Electronics CEO DJ Koh recently cleared some air over the future of the Galaxy Fold. Turns out, Samsung isn’t looking to cancel it, just yet. Rather, Samsung has reviewed all the defects that led into the Galaxy Fold’s fold-gate issue, and probably also has a fix just around the corner. Further details are awaited.

Also Read:  ‘Game Of Thrones’ Is Far From Over As The Real Story Is Yet To Begin