The Microsoft Surface Pro 8 offers two options with processors, the 11th generation Intel Core i5 and Core i7, with a 120hz refresh rate display. 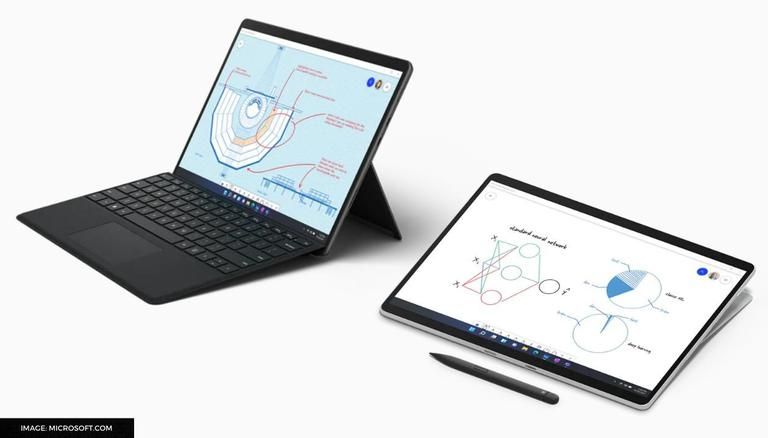 The Microsoft Surface lineup is powered by Intel Core processors, giving them an advantage in performance over the competitors. The current model is a major upgrade since the Surface Pro 3 was launched back in 2014. In a nutshell, the device is the best of Microsoft's Surface lineup combined in a compact form factor. It can be used as a laptop, a tablet, and a slate with a kickstand and pen.

The Microsoft Surface Pro 8 offers two options with processors, the 11th generation Intel Core i5 and Core i7. There will also be a Core i3 model. RAM and storage on the base model start from 8GB and 128GB respectively, which goes up to 32GB and 1TB on the top model. The company also claims that the latest Microsoft Surface Pro 8 comes with a 40% improvement in CPU performance and 74% better GPU graphical performance.

The Microsoft Surface 8 Pro features a 13" PixelSense Flow Display with a screen resolution of 2880 x 1920 (267 PPI). Additionally, the display comes with a fast 120Hz refresh rate. The higher models of the lineup come with Intel Iris X Graphics. In terms of battery life, the company claims up to 16 hours of typical device usage. The front-facing camera is a 5.0MP shooter with recording support of up to 1080p and the rear-facing camera is a 10.0MP shooter which can shoot up to 4k.

READ | Microsoft Surface Event 2021 set to take place on Sept 22: What to expect from this event?

The Surface Pro 8 comes with Wi-Fi 6 and Bluetooth Wireless 5.1 technology for wireless connectivity. Additionally, the device has plenty of ports including 2 x USB-C with Thunderbolt 4, 1 x Surface Connect port, Surface Type Cover Port and a 3.5 mm headphone/mic jack. The laptop also supports Surface Slim Pen 2 and Surface Slim Pen. While it will initially ship with Windows 10, the device is upgradable to Windows 11 as well.

While the device was launched on September 22, 2021, an official Microsoft Surface 8 Pro release date in India is not available yet. The base model of the laptop is expected to be priced at Rs. 59,999 in India, although that is also not confirmed yet.

WE RECOMMEND
Everything Microsoft launched at Surface 2021: New tablets, 'Ocean Plastic' mouse & more
Microsoft Surface Event 2021 set to take place on Sept 22: What to expect from this event?
Microsoft Surface Duo 2 rumoured to release in October: Check out leaked specs & details
Listen to the latest songs, only on JioSaavn.com