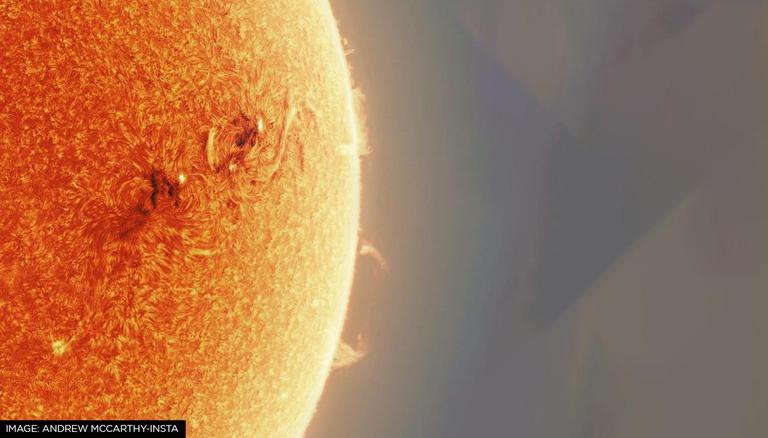 
Astrophotographer Andrew McCarthy has released several images of what he calls is the most detailed image of the sun ever clicked by him. Going by the name @cosmic-background on Instagram, the photographer informed that he stitched 1,50,000 individual pictures of the sun to produce the latest image featuring exquisite details of the solar surface. Captured with a unique photography method, the final picture is 300 megapixels in size, making it 60 times the size of normal five megapixels camera phone images.

'This was a very special one'

Hailing from Arizona, McCarthy said that he gets really excited about photographing the sun as it is always different. "While the moon is more of a benchmark of how clear the skies are, the sun is never boring and it was a very good day on the sun that day. It isn't until I am done processing an image that I actually see what it really looks like, and this was a very special one", he added as per a Daily Mail report.

The detailed picture of the solar surface was reportedly taken with a method that requires two telescopic filters where one saves the photographer's eyes and the other saves the telescope from burning. "To create the extreme magnification I used a modified telescope. Combined, those photos allowed me to see the sun in incredible detail", McCarthy further revealed as per Daily Mail.

Needless to say, photographing the sun in detail is extremely difficult owing to the immense amount of light it emits towards the camera, and can only be possible with a high-powered telescope. In the image shared above, one can notice the feature-like patterns of fire swirling on the surface giving us an idea about the temperatures on the surface of the sun.

However, it is worth mentioning that a similar image claiming a detailed representation of the solar surface has surfaced in the past but has turned out to be fake. For example, the image shared below by a user claims to be the one with extreme details of the sun released by NASA.

🔥 The clearest picture of the sun from NASA pic.twitter.com/F9ExmKkSgi

The said image later turned out to be fake as the user who first released it clarified that the picture was heavily software processed.

This heavily software-processed image of the solar chromosphere reveals the complex nature of the magnetic field within our star.

WE RECOMMEND
The Sun might be a reason for oceans here on Earth, claims new study
Washington St., Miami to meet in rematch of 2015 Sun Bowl
Solar Eclipse 2021, Dec 4 Timings: When and how to watch Solar Eclipse in India?
ESA's solar orbiter will encounter space debris before heading towards the sun
NASA's Parker solar probe encounters heavy bombardment of dust as it inches closer to sun
Listen to the latest songs, only on JioSaavn.com