“We all knew the lockdowns were going to have an impact on air quality,” said lead author Christopher Keller about COVID-19 clampdown that dipped NO2 emissions.

As the world was clamped down under the lockdown to stem the spread of the novel coronavirus, researchers at NASA found that the global Nitrogen dioxide (NO2) emissions drastically reduced by nearly 20 percent. Using the computer-based models, scientists have found that the hazardous air pollutant, primarily emitted into the atmosphere due to fossil fuel combustion by transportation and commercial industries,  significantly declined since February 2020. This was around the time when the world was hit by the first pandemic wave and many countries imposed stay-at-home orders and shuttered businesses to curb the COVID-19 transmission.

“We all knew the lockdowns were going to have an impact on air quality,” said lead author Christopher Keller with Universities Space Research Association (USRA) at NASA’s Goddard Space Flight Center in Greenbelt, Maryland, in a NASA release.

Further, researcher Christopher Keller said, “It was also soon clear that it was going to be difficult to quantify how much of that change is related to the lockdown measures, versus general seasonality or variability in pollution.” A researcher at NASA’s Goddard Global Modeling and Assimilation Office (GMAO), Kelly was a part of the team that conducted research using the high-tech computer models that help track the chemistry of the ocean and the atmosphere and forecast climatic changes. 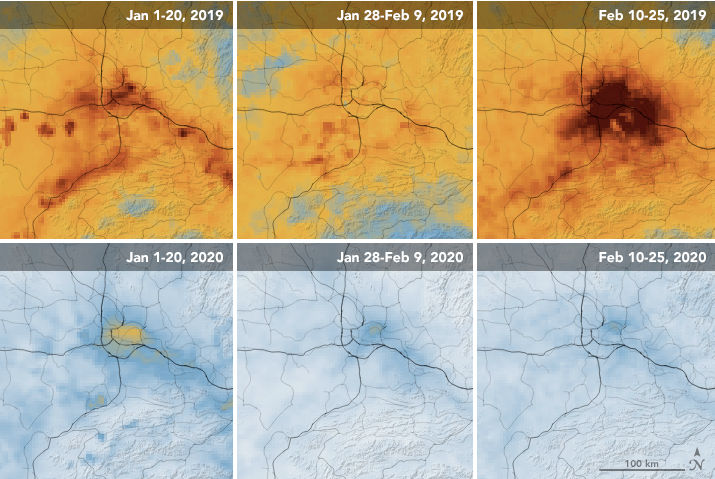 [Nitrogen dioxide levels often dip during Lunar New Year celebrations in China and much of Asia, and then rebound. But no rebound was evident this year over Wuhan, China where the virus was first reported, and nitrogen dioxide levels remained much lower than in 2019. Credit: NASA's Earth Observatory]

Scientists at NASA measured the percentage of nitrogen dioxide concentrations in the atmosphere with the help of NASA model projections. Comparing it with the emission in the previous years, they estimated the change in the atmospheric composition caused by the COVID-19 containment across the globe. “There was no predicting the sudden, drastic shifts in human behaviour as the novel coronavirus—and the regulations attempting to control it,” researchers said in a release. They conducted the study using model simulation and machine learning to subtract the simulated values and the measured ground observations at NASA Center for Climate Simulation to achieve the findings.

“Many countries have already done a very good job in lowering their nitrogen dioxide concentrations over the last decades due to clean air regulations, but what our results clearly show is that there is still a significant human behavior-driven contribution,” Kelly said in a release.

Data from at least 46 countries were used, including a total of 5,756 observation sites. In at least 50 of the 61 cities that were used for emission analysis, a significant reduction in nitrogen dioxide’s release, between 20-50 percent, was noted. “In some ways, I was surprised by how much it dropped,” said Keller. The NO2 emission was dropped to 60 percent lower than simulated values, a 60 percent decline was found in Milan, and a 45 percent decrease in New York.

WE RECOMMEND
6 days ago
UN says terrorist groups exploiting COVID-19 pandemic with extortion, bio-warfare
6 days ago
Biden says delay in transition to put COVID-19 vaccination plan behind by 'weeks or month'
6 days ago
Spain approves Phase 3 clinical trials of Janssen's COVID-19 vaccine; trial at 9 hospitals
1 week ago
China to discuss Xi’s offer of cooperation with India for COVID-19 vaccine development
1 week ago
COVID-19: Only 50 people to be allowed at marriage functions in Delhi as DDMA reverts to earlier cap