In a blow to Jeff Bezos, his private space company Blue Origin lost a lawsuit against NASA's billion-dollar contract which was awarded to Elon Musk's SpaceX 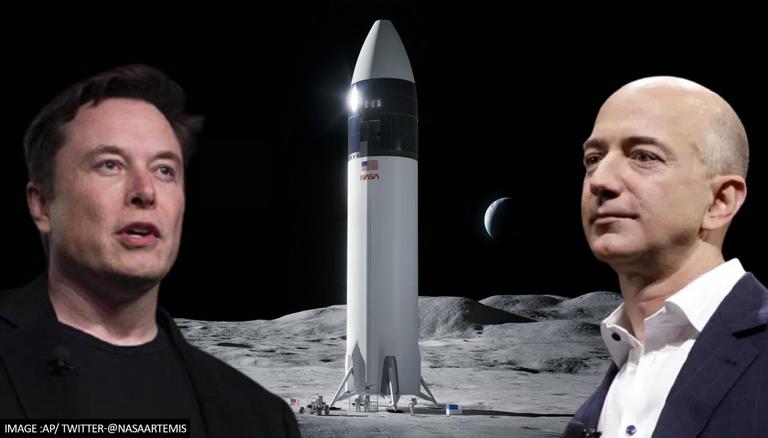 
In a major blow to Jeff Bezos, his private space company Blue Origin lost a lawsuit against NASA's billion-dollar lunar contract which was awarded to Elon Musk's SpaceX earlier this year. The US Court of Federal Claims ruled against Bezos' company on Friday, November 5, meaning that SpaceX can now resume its work to develop a lunar lander. Blue Origin had sued NASA earlier this year, after the latter awarded SpaceX a $2.9 billion contract to develop the first Human Landing System (HLS) for the upcoming Artemis mission. The lawsuit put the two wealthiest humans in the world in direct legal conflict, and after the Amazon founder's loss, Elon Musk didn't hold back in rubbing it in.

Although the decision wasn't in Bezos' favour, he apparently doesn't hold a grudge over the ruling. Following his loss, Bezos tweeted the official ruling document on Twitter with a caption that read, "Not the decision we wanted, but we respect the court’s judgment, and wish full success for NASA and SpaceX on the contract".

Not the decision we wanted, but we respect the court’s judgment, and wish full success for NASA and SpaceX on the contract. pic.twitter.com/BeXc4A8YaW

Meanwhile, NASA seemed relieved over the decision and said that they are planning to resume the work at the earliest. According to a CNBC report, the administration added, "There will be forthcoming opportunities for companies to partner with NASA in establishing a long-term human presence at the Moon under the agency’s Artemis program". On the other hand, Blue Origin asserted that it is still "deeply committed" towards the Artemis mission and reiterated a fair selection process for the project.

While Bezos and NASA might have turned soft on their stance, the Court's decision might have added fuel to the fire between the world's richest (currently, Musk) and second-richest person. Following SpaceX's legal victory, Musk trolled Bezos through a hilarious post from the movie "Dredd" that read, "You have been judged!" and needless to say, it has again triggered a meme fest on the micro-blogging site.

What was the Jeff Bezos-Elon Musk NASA contract feud about?

In April 2021, SpaceX bagged a $2.9 billion contract from NASA for developing a lander that will be used in the Artemis missions in the future. SpaceX did so by beating two companies- Dynetics and Blue Origin-owned consortium 'The National Team' and is supposed to offer its next-generation Starship to take the astronauts to the Moon. Disparaged by the decision, Bezos sued NASA and both the companies lodged their complaints with the U.S. Government Accountability Office (GAO), as per Space.com. The protestors argued that NASA's selection process was flawed and that the administration had pledged to develop two landers from two competitors. Recently, NASA countered by saying that the tight budget kept them from awarding multiple contracts to different companies.