Elon Musk's SpaceX is all set to launch to orbit its “historic first all-civilian human spaceflight mission” - Inspiration4 - on September 15. 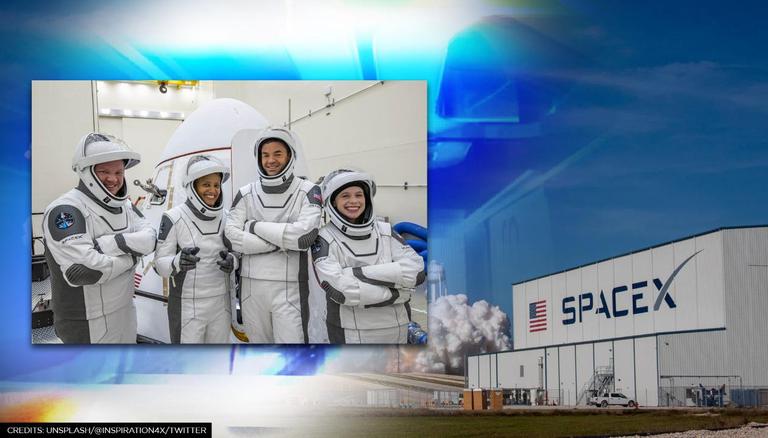 
SpaceX is all set to launch to orbit its “historic first all-civilian human spaceflight mission” - Inspiration4 - on September 15. While taking to Twitter, the mission team said that SpaceX and Inspiration4 completed flight readiness review and is on track for launch. The mission will blast off from Launch Complex 39A at NASA’s Kennedy Space Center in Florida.

A crew of four civilians will strap into a Crew Dragon Spacecraft and they will blast off on a three-day journey around the Earth. SpaceX in February had announced that the charity-driven mission will be commanded by Billionaire Jared Issacman, who is the founder of Shift4 Payment. The Inspiration4 crew – consisting of Mission Commander Jared Isaacman, Mission Pilot Dr Sian Proctor, Medical Officer Hayley Arceneaux, and Mission Specialist Chris Sembroski – are scheduled to arrive in Florida on Thursday to begin final preparations for their mission.

#Inspiration4 and @SpaceX have completed our flight readiness review and remain on track for launch! Read more about launch details and potential timing here: https://t.co/Wj7hSWDOXZ pic.twitter.com/X8L9ZKk8Wl

The exact liftoff time will be determined few days before the launch. According to a press note, the team will narrow the 24-hour launch window down to five hours, taking into account the weather conditions at the launch site, the flight trajectory and at potential emergency landing sites off the Florida coast. Once in the orbit, the crew will then circle the Earth every 90 minutes along a customised flight path.

About the upcoming three-day mission

The Dragon will stay free-flying in orbit and it will not visit the International Space Station, as previous Crew Dragon missions have done. Therefore, the docking port of the capsule has been removed and replaced with a dome window which was inspired by the Cupola on the ISS. The window will provide the crew with incredible views of Earth. After completing the three-day mission, the Crew Dragon Capsule will re-enter Earth’s atmosphere for soft water landing off the coast of Florida.

It added, “This focused preparation was essential in team development and being ready to execute their role as the first commercial crew to orbit the Earth”.

Meanwhile, it is worth mentioning that Issacman had purchased the flight as part of an effort to raise millions for St. Jude Children's Research Hospital. With this mission, the team aims to send a humanitarian message of possibility while representing a new era for human spaceflight and exploration. “Isaacman has donated the three mission seats alongside him to crew members who will represent the mission pillars of leadership, hope, generosity and prosperity,” the Inspiration4 website read.