How Big Is The ISS? Size, Exact Location And More About The International Space Station

How big is the ISS is a popular questions asked by the internet users lately. So we have gathered information about its size, length and more right here. Read


The International Space Station has been one of the most talked-about topics amongst internet users lately. They are curious to know about this man-made object that is floating around in space. The users have been trying to find some specific information about the International Space Station and are thus asking questions like how big is the ISS. Here is some valuable intel that could answer the questions asked by users. Read more about the ISS.

How big is the ISS?

The ISS is the biggest man-made object that is present in space and it also happens to be the third-brightest object in the sky. The ISS is 109 metres long and 75 metres wide, which is basically the size of a soccer field, and it weighs around 420 tonnes that is about the same as 280 cars. It has a total of 932 cubic metres of space. But two-thirds of the entire station is used for equipment and storage, which leaves one-third for humans to live in. ISS orbits the Earth at a speed of 17,500 mph at an average altitude of approximately 250 miles. An international crew of 6 astronauts live at the ISS and since November 2000 the station has been continuously occupied. Apart from this, we have also managed to gather some measurements of the ISS size from NASA’s official website.

The ISS keeps moving continuously, but a tracker has been developed by European Space agency that allows it to see the ISS’s path 90 minutes ago (-1.5 hr) and 90 minutes ahead (+1.5 hr) through a map. We have managed to get the exact location of ISS with the help of this map. The map was uploaded on the tracker’s website as well as the “spot the ISS” page on NASA’s website. 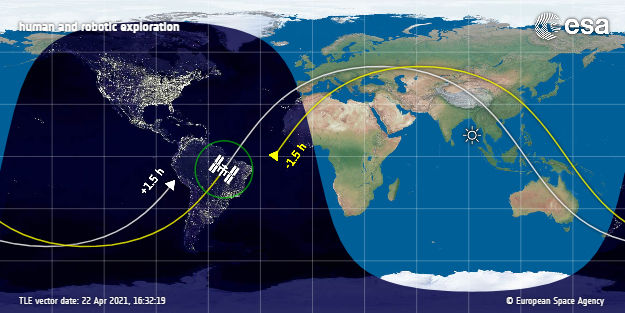