It's always tough to capture photographs of the International Space Station (ISS) from the Earth. According to the ISS, it is next to impossible. 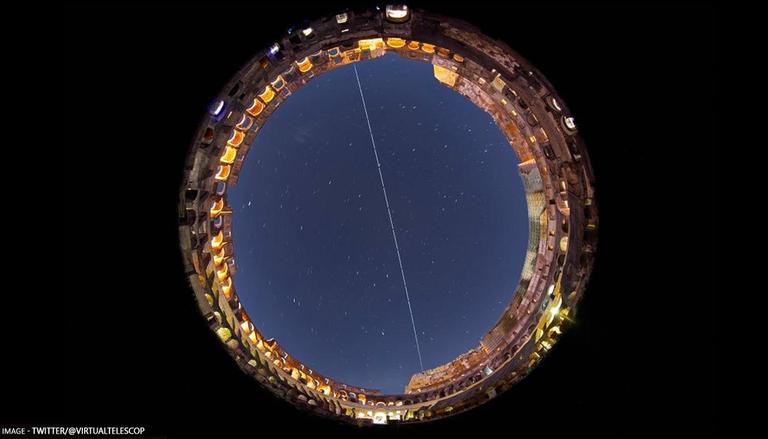 
It's always tough to capture photographs of the International Space Station (ISS) from the Earth. According to the ISS, it is next to impossible. However, on National Space Day, the Parco Archeologico del Colosseo and The Virtual Telescope Project collaborated to click a photograph of two bright passes of the International Space Station above the Colosseum. As per the statement released by the Virtual Telescope Project, it's once-in-a-lifetime sight. Therefore, to click such an astonishing image, the group has visited at least 14 countries to check the best angle from where the photograph can be taken perfectly. The group said they found Italy as the most suitable place to get a perfect shot.

According to Virtual Telescope, the special satellite flies at an altitude of about 400 km, at an amazing speed of about 28,000 km/h. It takes 90 minutes for the ISS to complete an orbit around the planet Earth. Notably, Virtual Telescope is a new robotic facility that makes it possible for people worldwide to participate in real-time observations of the sky. It is run by astrophysicist Gianluca Masi. "To celebrate our First National Space Day we wanted to capture and share such a transit from a place of unmatched beauty and importance, an emblem of Italy, of the City of Rome and our history: the Colosseum. Looking up from the heart of the Amphitheatre, that legendary monument seems to embrace a large portion of the sky, with its millenary walls framing stars and ancient constellations, preserving them from light pollution," said the Virtual telescope.

"It is impossible to express by words the feeling and the excitement while admiring the cosmic panorama from the Colosseum, one of the most important monuments of the world: the beauty of the sky and the one of our home planet exalt each other and the pass of the International Space Station becomes a truly unforgettable experience. Knowing what you are seeing and where you are… is mind-blowing," added the statement. The robotic facility said the once-in-a-lifetime sight was captured when different passes of the ISS above the Flavian Amphitheatre, observed on 6 and 7 December 2021, respectively. "The former was simply a record one, with the ISS reaching the zenith exactly overhead from the Colosseum; the latter happened at twilight, while the sky was still significantly bright," according to the Virtual Telescope.