A new study published in Journal Science has revealed that about two and a half million Tyrannosaurus rex considered as the king of dinosaurs, roamed the earth.


A new study published in the Journal Science has revealed that about two and a half million Tyrannosaurus rex, considered as the so-called king of dinosaurs, once roamed the earth. As per the scientists, estimating abundance for species that are extinct can be a tricky task. The scientists used a relationship established between body size and population density in extant species to estimate traits such as density, distribution, total biomass, and species persistence. It was then concluded that estimating abundance and preservation rates of extinct species requires data from living species.

Assessing the number of Tyrannosaurus rex

The abundance at one time was 20,000 individuals, that persisted for 127,000 generations, and the total number of T. rex that ever lived was 2.5 billion individuals, with a fossil recovery rate of 1 per 80 million individuals or 1 per 16,000 individuals. As per scientists, a lot of things can be inferred from fossil material, including cell sizes and thus genome sizes. However, quantifying population-level variables such as population density and abundance can be difficult to extract due to the incompleteness of the fossil record. This is also because the fossilization rates are unknown. 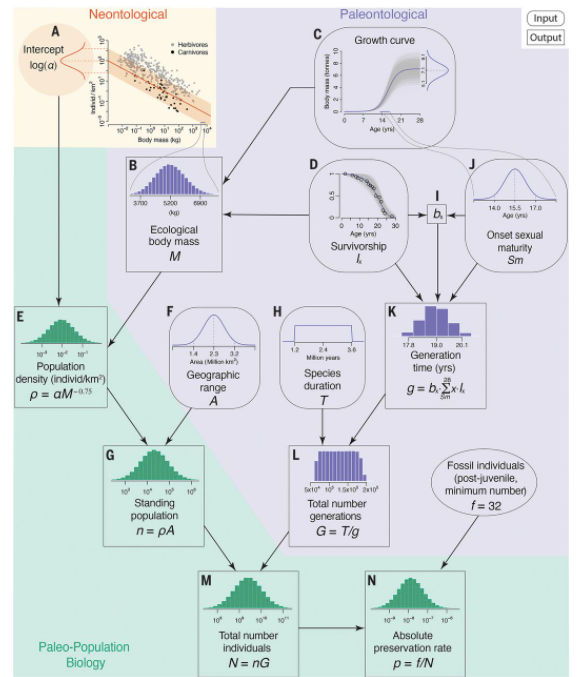 (Schematic showing the use of paleontological and neontological data to estimate population variables and the absolute preservation rate for T. rex. Image Credits: Science.sciencemag.org)

Data which comes from the living species indicate a strong relationship between population density and body mass. This makes it possible to estimate population-level variables. In this study, the scientists used this relationship to estimate its population density, which was then combined with the knowledge of the species to estimate several population-level variables, including the total number of T. rex that ever lived and the species’ preservation rate. The scientists assessed the impact of uncertainties in the data used with Monte Carlo simulations. It turned out that these simulations do not accommodate uncertainties that come from the choices made in the design of the scientists’ approach.

WE RECOMMEND
Tyrannosaurus rex skeleton was discovered in South Dakota on this day in 1990
New species of dinosaur related to Tyrannosaurus rex discovered on the Isle of Wight
T-rex's intense 'growth spurt' in early days contributed to its gigantic size: Study
Scientists discover inter-vertebral discs in dinosaur that will help medicine
'Scotty' is the largest Tyrannosaurus Rex skeleton ever found; You won't believe how he got his name