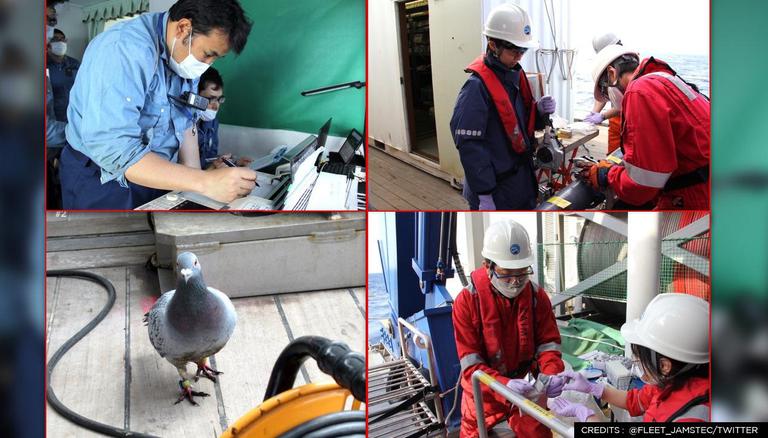 
A team of researchers have drilled the ‘deepest hole ever’ off the coast of Japan in the Pacific seabed as a part of a project to research the history of earthquakes in the region. Scientists onboard the Kaimei vessel curated a total of 37.74-meters of sediment after they lowered a long, thin drill dubbed as ‘giant piston corer’ nearly 5 miles (8,000 meters) into the Pacific Ocean. In about two hours and 40 minutes, the drill finally reached the bottom of the Japan Trench, the deepest water site of the expedition, and dug a hole at the speed of 1.1 m/s.

#DailyPhotos for 14 May.
1) #GPC operation team leader confirming barrel release from the hole by a pen recorder
2) A pigeon watching our deck work
3) Stand-by to pass a drive shaft of the liner cutter
4) A sample put into an aluminum bag pic.twitter.com/Dx98GtHqrV

“This now breaks the record as the new deepest water site drilled and cored within scientific ocean drilling history,” the crew that prepared the 40 meters long Giant Piston Corer (GPC) said in a statement released on IODP Expedition 386 Japan Trench Paleoseismology blog. The researchers managed to dig the deepest water site ever that cored at the water depth of 8023 meters breaking the previous set record of drilling two 15.5 and 20.5 m long cores from 7034 and 7029-meter water depth in the Mariana Trench, almost 50 years ago. According to the expedition crew, Captain Naoto Kimura of the Research Vessel Kaimei managed to position the vessel over the seafloor at this deepest water site breaking new records within the scientific ocean drilling history.

"At 12:06 local time, spud in took place and the crew then pulled out and ran the assembly back to surface, where the GPC was recovered to deck at 15:00 local time,” the crew explained.

“We greatly acknowledge the tremendous efforts of the Captain and his crew to safely carry out such challenging ultra-deepwater coring operations and look forward to now undertaking scientific analyses on these samples from the deepest of the deep,” it continued.

#DailyPhotos for 15 May.
1) Ready to run #GPC into water
2) Gallows, move outward!
3) The offshore science party gathering to cut and sample Trigger core
4) #Core arriving at the cutting space pic.twitter.com/kq2WLv5nBq

Site of Tohoku-Oki earthquakes of 2011

The sediment retrieved by the team preserves the details of the oldest earthquakes. Japan Trench lies on the fault zone where the magnitude 9.1 Tohoku-Oki earthquakes struck in 2011. The region has a long history of large earthquakes that have also generated tsunamis like the one that struck in 2011, Pratigya Polissar, associate professor of ocean sciences at UC Santa Cruz said in a research published in Nature Communications. Therefore the sediment collected by the scientists will help in the research about the earthquakes that may have occurred during the times for which there is limited written record.