NASA launched Mercury-Atlas 4 (MA-4) from Cape Canaveral, a special spacecraft that consisted of vibration and noise instrumentation and a mechanical simulator.

On this day September 13, 1961, NASA launched the Mercury-Atlas 4 (MA-4) from Cape Canaveral, a special spacecraft that consisted of vibration and noise instrumentation and a mechanical crewman simulator for the first time ever. It was NASA’s first Mercury spacecraft to orbit the Earth at 123 nautical miles. This flight was an orbital test of the Mercury Tracking Network and the first successful orbital flight test of the Mercury program. NASA’s previous successful launches were suborbital. The payload of the spacecraft consisted of a pilot simulator to test the environmental controls, two voice tapes to check the tracking network, a life support system, three cameras, and instrumentation to monitor levels of noise, vibration, and radiation.

“It demonstrated the ability of the Atlas rocket to lift the Mercury capsule into orbit, of the capsule and its systems to operate completely autonomously, and succeeded in obtaining pictures of the Earth,” NASA said in the release.

Read: 5 Asteroids Are Heading Towards Earth; NASA Reveals How Closely They Will Pass Us

The Mercury-Atlas 4 (MA-4) completed one orbit prior to returning to Earth in an extraordinary landing. The capsule was recovered 161 miles east of Bermuda 82 minutes after splash-down by the destroyer USS Decatur. According to NASA as the spacecraft triggered the retrograde rockets, it sank in the Atlantic Ocean in mysterious Bermuda. 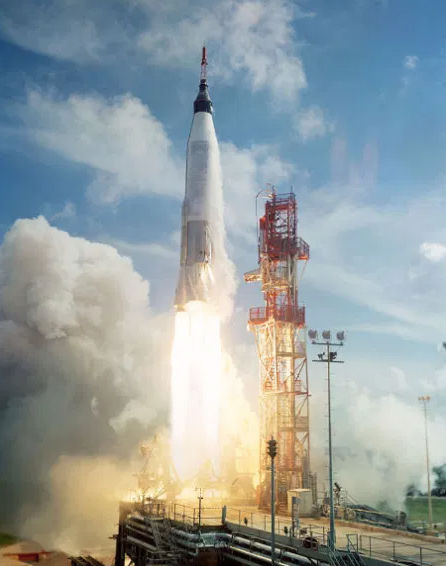 [Mercury-Atlas 4  began this morning in a blast of fire on a Florida launchpad and lasted one hour and fifty minutes.  Credit: NASA]

Later, three deviations from the spacecraft were observed, failure of an inverter in the environmental control system, loss of voice contact over Australia, and oxygen system leaks. At that time, the United States had shorter-ranged IRBMs, sufficient only to launch small payloads into space, unlike the Russians that announced that their first ICBM in 1957. ICBM is used to launch something as heavy as a manned spaceship, therefore, the US tested Atlas with the Mercury capsule for an unmanned orbital flight.