Perseverance also revealed that the Jezero crater endured flash floods in the past, which had swept massive boulders that can still be found near the crater. 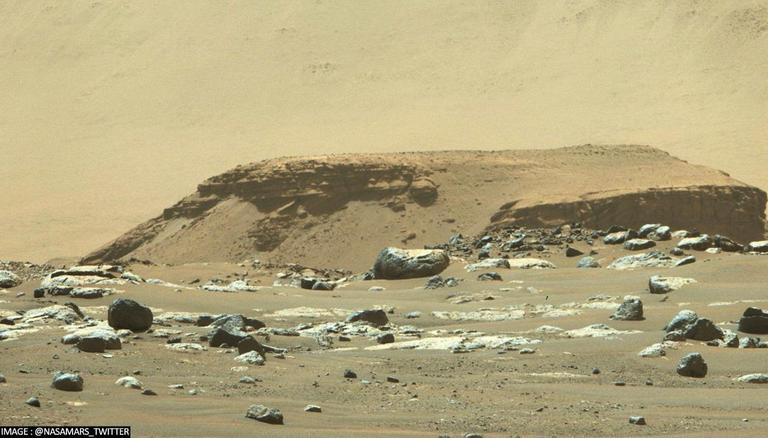 
NASA’s Perseverance rover, which was waved off to Mars’ Jezero crater in February 2021, has confirmed that the crater once housed giant lake billions of years ago. According to the study published in the Journal Science, the scientists reached this conclusion after analysing photographic data sent by the rover in the three months after landing. Perseverance touched down the crater with an aim to look for signs of life and collect Martian samples to send it back to Earth.

From space, the Mars Reconnaissance Orbiter and other spacecraft gave us tantalizing hints about Jezero Crater's watery past. Now that the @NASAPersevere rover is providing close-ups from the ground, scientists have encountered some geological surprises: https://t.co/9tXmiFNsDS pic.twitter.com/ern4PqRkV6

‘Jezero’ dried out 3.7 billion years ago

Although scientists believe that the red planet housed a massive lake that was fed by a steadily flowing river, data shows that the crater, in fact, the entire Mars, dried out 3.7 billion years ago. As per a report by the Massachusetts Institute of Technology, the study of Perseverance’s images pointed out the aforementioned points even before the rover started scanning the entire crater region. Besides this, the images also revealed that the Jezero crater endured flash floods in the past, which had swept massive boulders that can still be found near the crater, as per the MIT.

Benjamin Weiss, professor of planetary sciences in MIT’s Department of Earth was reported saying, "There’s not a drop of water anywhere, and yet, here we have evidence of a very different past. Something very profound happened in the planet’s history.” Citing the study's co-lead author Nicolas Mangold, another report by Space.com suggested, that the lake was about 100 meters lower than what previous orbital data had shown.

READ | Mars Perseverance Rover pictures: These illustrations from NASA will leave you awestruck

Now that the evidence of Jezero housing a lake has come to light, scientists will now be looking for hints about Mars' climatic evolution. They believe that if the planet had lakes, life forms must also have thrived in those years. According to the MIT, Perseverance will now collect samples of the sediment which will later be sent to the Earth in a hunt for Martian biosignatures.

Perseverance rover and its adventures

Perseverance landed on Mars on February 18, 2021, after travelling 471 million kilometres. Its first three months were inactive as the NASA engineers thoroughly checked all its equipment before they put it to work. MIT revealed that the photographs that proved the existence of a lake in Jezero were taken during this period by the rover's two cameras, Mastcam-Z and the SuperCam Remote Micro-Imager (RMI).

I’m parked in a sweet spot between dunes and a rock outcrop, ready for a 2-week solar conjunction, when the Sun blocks signals to and from Mars. During the lull, I’ll tackle jobs I can do on my own, like watching for dust devils and taking in the weather.https://t.co/f6M1Vz2Q5h pic.twitter.com/70xSLczS9Q

Currently, the rover is waiting for the two-week solar conjunction to end and will perform jobs like watching for dust devils and analysing the weather.

WE RECOMMEND
NASA to broadcast launch of Russia's first movie crew to ISS; here's how to watch it
NASA shares sounds from Milky Way's center; netizens call them 'divine'
NASA to begin simulated trip to Mars moon 'Phobos' from Oct 1; volunteers announced
NASA shares mesmerising video of Saturn's moons parading across the planet; Watch
NASA schedules launch of DART spacecraft for Nov. 23; Here's how to watch it
Listen to the latest songs, only on JioSaavn.com