The Nobel Prize 2022 in Chemistry has been awarded to three scientists "for the development of click chemistry and bioorthogonal chemistry". 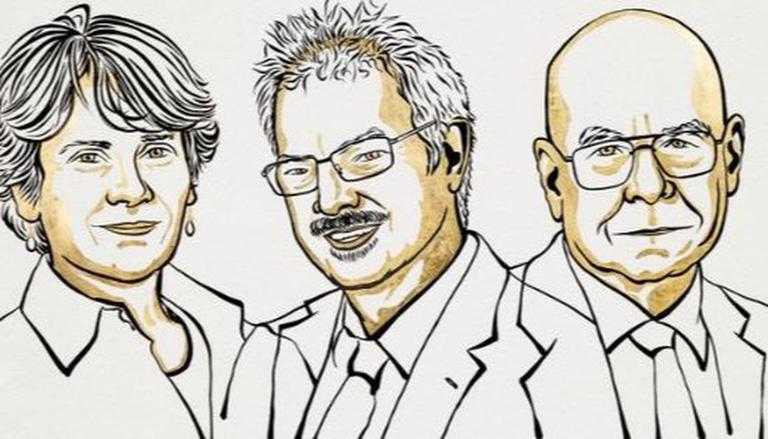 
Three scientists Carolyn R. Bertozzi, Morten Meldal and K. Barry Sharpless have won the Nobel Prize 2022 in Chemistry “for the development of click chemistry and bioorthogonal chemistry". The prize, which consists of a gold medal, a diploma, and a cash prize of $9,00,000 will be handed over to the winner on December 10, the date when Alfred Nobel, creator of the Nobel Prize died.

BREAKING NEWS:
The Royal Swedish Academy of Sciences has decided to award the 2022 #NobelPrize in Chemistry to Carolyn R. Bertozzi, Morten Meldal and K. Barry Sharpless “for the development of click chemistry and bioorthogonal chemistry.” pic.twitter.com/5tu6aOedy4

The award was shared by two scientists last year – Benjamin List and David W.C. MacMillan– for developing a tool that offered an ingenious and environmentally cleaner way to build molecules.

The Nobel awards are being handed out starting October 3, when Svante Paabo won in Physiology or Medicine for his evolutionary discoveries followed by The prize in Physics which was shared between three physicists– Alain Aspect, John F. Clauser and Anton Zeilinger – for their work in quantum mechanics.

Moving forward, the Nobel Prize in Literature will be announced on October 6, followed by the awards for Peace and Economics on October 7 and October 10, respectively.

The 2022 #NobelPrize laureates in chemistry Barry Sharpless and Morten Meldal have laid the foundation for a functional form of chemistry – click chemistry – in which molecular building blocks snap together quickly and efficiently. pic.twitter.com/uHCEQI59Zv

Carolyn Bertozzi – awarded the 2022 #NobelPrize in Chemistry – has taken click chemistry to a new dimension and started utilising it in living organisms. Her bioorthogonal reactions take place without disrupting the normal chemistry of the cell. pic.twitter.com/ljBgNQpMwx

What is the Nobel Prize in Chemistry about?

This Nobel Prize is about click chemistry, which is a functional form of chemistry whose foundation was laid by Barry Sharpless and Morten Meldal. It is worth noting that Sharpless has won his second Nobel Prize in Chemistry (first in 2001), making him the fifth individual of such achievement.

Sharpless and Meldal worked on click chemistry, which was taken to a next level by Carolyn Bertozzi through her bioorthogonal reactions. Click chemistry was first brought up by Sharpless who defined it as the method of driving molecules to bond together without forcing them to do so, which would many of the side reactions, with a minimal loss of material.

Avoiding reactions and loss of material is extremely important for the development of pharmaceuticals because creating complex molecules in laboratories give out by-products. These by-products must be removed before further carrying out the process, and sometime this results in the loss of material that hardly anything is left as the end product.

While this was a challenge for many chemists, Sharpless suggested that they should  start with smaller molecules that already had a complete carbon frame instead of trying to force reluctant carbon atoms into reacting with each other. Why carbon? Because the bonds between carbon atoms are vital to the chemistry of life.

He basically coined the concept of click chemistry which is a form of simple and reliable chemistry, where reactions occur quickly and unwanted by-products are avoided. And in the early 2000s, Sharpless and Maldel, independent of each other discovered that the copper catalysed azide-alkyne cycloaddition is what could drive this click chemistry.

As for Bertozzi, she developed click chemistry that can be used inside living organisms. Her bioorthogonal reactions – those which occur without disturbing the normal chemistry of the cell – are used globally to explore cells and track biological processes. According to the Nobel Committee, the bioorthogonal reactions have helped researchers improved the targeting of cancer pharmaceuticals, which are now being tested in clinical trials.