Recent photographs have shown that two colossal Antarctic glaciers are 'progressively' breaking free from retrains that have helmed them in for centuries.

Recent photographs have shown that two colossal Antarctic glaciers are 'progressively' breaking free from retrains that have helmed them in for centuries. This new development has caused major concern among the scientists and environmentalist who have now warned that this could lead to an exponential rise in the sea level.

Located in Amundsen Sea in West Antarctica, both the glaciers- Pine Island and Thwaites already contribute to five per cent of global sea-level rise. As per the study published by the Proceedings of the National Academy of scientists, their melting could threaten a lot of low lying landforms.

Out of the two, Thwaites has been deemed extremely critical with experts predicting that its melting could lead to raising the seawater by nearly 10 feet. Threatened by this, the UK and US have launched targeted multimillion-dollar research mission to the glacier whose loss could trigger the collapse of the west ice sheet.

These findings were derived after researchers analysed satellite images that showed the glacier margins depleting. The images "show that a naturally occurring buffer system that prevents the glaciers from flowing outward rapidly is breaking down, potentially unleashing far more ice into the sea in coming years," the scientists wrote in the study. As per the experts, the glaciers’ “sheer margins” were progressively weakening and in some cases breaking into pieces. In addition, the study also found that further signs of disintegration were possible. 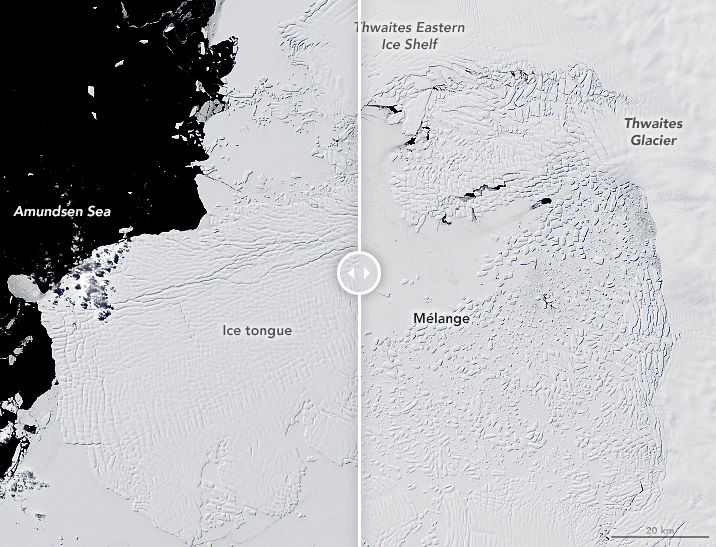 Glaciers in Jammu, Kashmir and Ladakh are melting at a "significant" rate, according to a first-of-its-kind study which used satellite data to find that over 1,200 glaciers in the Himalayan region saw an annual reduction in mass of 35 centimetres (cm) on average between 2000 and 2012. The study, published in the journal Scientific Reports, was carried over the Jammu, Kashmir, and Ladakh region, including areas across the Line of Control (LoC) and Line of Actual Control (LAC), and in all 12,243 glaciers were studied for thickness and mass changes.

Read: Pluto's Glaciers May Be Growing Due To Change In The Dwarf Planet's Seasons: Study