The 'Take a Break' feature will be available as a choice or option for users, as they will be able to set in-app reminders to take a break from Instagram. 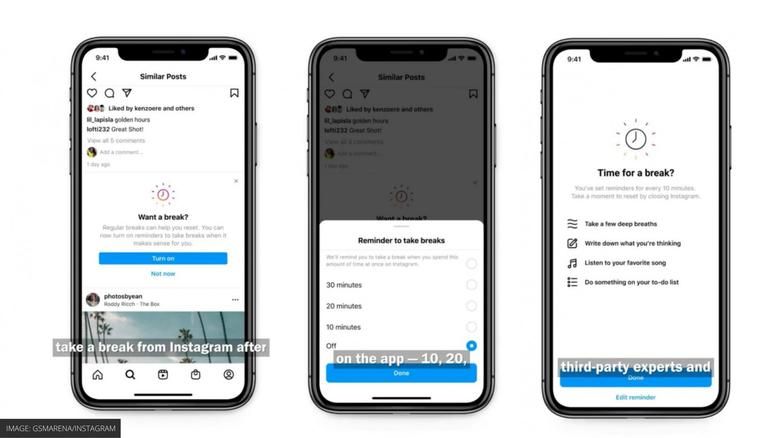 
Meta owned social media platform Instagram has started testing a new feature that will prompt users to take a break from the application. The feature is called Take a Break' and does exactly what it sounds like - it will ask users to close the application for a while if they have been using it for too long. The feature is currently in the initial stages and will help users curb their Instagram addiction by encouraging them to take a break from the photos and videos sharing platform.

Adam Mosseri, head at Instagram announced the feature on November 10, saying that the feature is a "part of the broader effort to try and give people more control over their experience of Instagram." Adding to it, he says that "Instagram has worked with third-party experts to develop the `Take a Break` feature, and it will begin rolling out to a small percentage of users over the coming days." Instagram will also release more features like this in the future

We started testing a new feature called “Take a Break” this week. This opt-in control enables you to receive break reminders in-app after a duration of your choosing.

I’m excited to dig into the results & hopefully launch this sometime in December. ✌🏼 pic.twitter.com/WdSTjL6ZdH

The 'Take a Break' feature will be available as a choice or option for users, Those who opt-in for the feature will be able to set reminders in regular intervals of time so that the application reminds them to take some time off after using it for 10, 20 or 30 minutes continuously. It is important to note that the feature comes at a time when Facebook's (now called Meta) products such as its social media app and Instagram and under scrutiny by authorities after an ex-employee turned whistleblower revealed thousands of documents about the company's internal research that finds the social media platforms to be harmful for the audience.

Most recently, Instagram was reported to be working on a feature that allows its users to create exclusive content for paying subscribers. The type of content includes stories, live videos, posts and more. Under the 'In-App Purchases' section for the Instagram application, there is a new category called 'Instagram Subscriptions'. The category is live in the Indian App Store as well and Instagram Subscriptions are priced at Rs. 89 per month. For now, the feature seems to be available on iOS and might be available on Android soon.