With an aim to offer strategic partnership and discuss shared interests, US Secretary of State Antony Blinken embarked upon a 5-day trip to African countries. 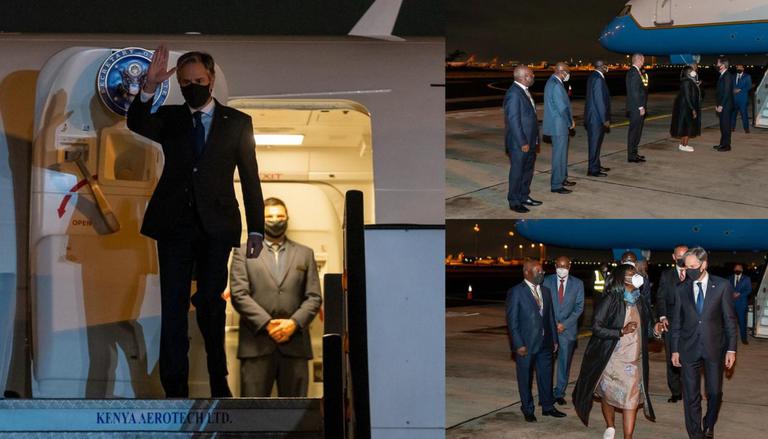 
With an aim to offer strategic partnership and discuss shared interests, US Secretary of State Antony Blinken embarked upon the journey to African countries, beginning with Kenya. On Wednesday, the top US diplomat engaged in conversations with Kenyan leaders and discussed ways to work together to address shared challenges "as democracy requires active citizen participation". He also met the President of Kenya, Uhuru Kenyatta, and expressed Washington's commitment to the U.S.-Kenya Strategic Partnership is stronger than ever. "From COVID-19 to climate change, to fostering an inclusive, growing economy, meeting global goals is not possible without partners like Kenya," Blinken said in a subsequent tweet.

Nearly 10 months into the tenure, Blinken's trip brought to Africa the 'America's back' strategy, however, it is yet to catch up with China's deep-rooted business and diplomatic engagements in almost 54 African nations, ABC News reported. On the sidelines of the diplomatic meeting, the State Secretary also engaged in social events like planting trees in the Kenyan Karura forest and participated in the National Geographic show 'Kids in Africa' to spread the verse of conservation.

Thank you, President Kenyatta, for hosting me in Nairobi. Our commitment to the U.S.-Kenya Strategic Partnership is stronger than ever. From COVID-19 to climate change, to fostering an inclusive, growing economy, meeting global goals is not possible without partners like Kenya. pic.twitter.com/LRxZI8CGon

Blinken also met the  Kenyan Cabinet Secretary Raychelle Omamo in Nairobi late on Wednesday for the 2nd round of Bilateral Strategic Dialogue. Although Blinken will skip visits to Ethiopia and Sudan, owing to the worsening crisis in the region. Thus, talks revolving around bringing peace and stability in the nations remained a staple discussion between Blinken and the African diplomats. On Wednesday, Blinken also met with the Intergovernmental Authority on Development Executive Secretary, Dr. Workneh Gebeyehu, to discuss situations in Ethiopia, Sudan, South Sudan, and Somalia and looked forward to continuing US partnership with IGAD 'to see the region prosper.'

Blinken warns of global 'democratic recession' amid crises in Africa

Amid the simmering crises in Ethiopia and Sudan, Blinken highlighted the need to combat potential "democratic recession" looking at the fragility of the conflicts in the continent.  He joined Kenya's foreign minister in calling for a ceasefire in Ethiopia. Speaking to civic leaders during his five-day visit, Blinken emphasised that "this is an important time...around the world we've seen over the last decade or so...what some have called democratic recession," the AP reported. Alluding to the presidential elections in August 2022 in Kenya, the US too diplomat also advised that it was mandatory to refrain from misinformation, political violence and voter intimidation to avert the backslide of democratic principles.

US seeks to resolve conflicts in Ethiopia and Sudan

Despite months of engagement by the US administration, including an August visit to Ethiopia by Samantha Power, US Agency for International Development and Jeff Feltman (Biden's special envoy to the Horn of Africa), Washington has made very little progress in bringing peaceful negotiations to the table. Instead, tensions across the regions have escalated far more than earlier, with inter-ethnic killings and violent uprisings and million displacements, the Associated Press reported.

READ | Ethiopia: Tigray rebels should disarm before engaging in any talks, says ambassador

In order to curb violence in the African region, Biden imposed sanctions on Ethiopia, excluding it from a US-Africa trade pact. As per AP, possibilities of sanctions on Ethiopian officials like PM of Ethiopia Abiy Ahmed also loom. While on one side Feltman has shuttled between Addis Ababa and Nairobi, the situation in Sudan has further worsened with Chief of Military Forces, Abel Fattah Al-Burhan, declaring himself the head of Sovereign Council last week. However, in the last few days, with Lt. General Al-Burhan agreeing to engage in substantive 'unconditional dialogue' to reinstate democratic government in the Sudanese Council, rays of hope have emerged, as per Xinhua.