Sudanese Prime Minister Abdalla Hamdok, in his address to the nation, said that the formation of the national mechanism to protect civilians has been completed.

Sudanese Prime Minister Abdalla Hamdok, on the occasion of the country's 65th Independence Day, announced the formation of a "National Mechanism" for the protection of civilians and to achieve security and stability in the nation. Hamdok, in his address to the nation, said that the formation of the national mechanism to protect civilians has been completed, adding "targeting citizens with extrajudicial killing, torture or enforced disappearance, regardless of the reasons for this, is totally unacceptable by all Sudanese". 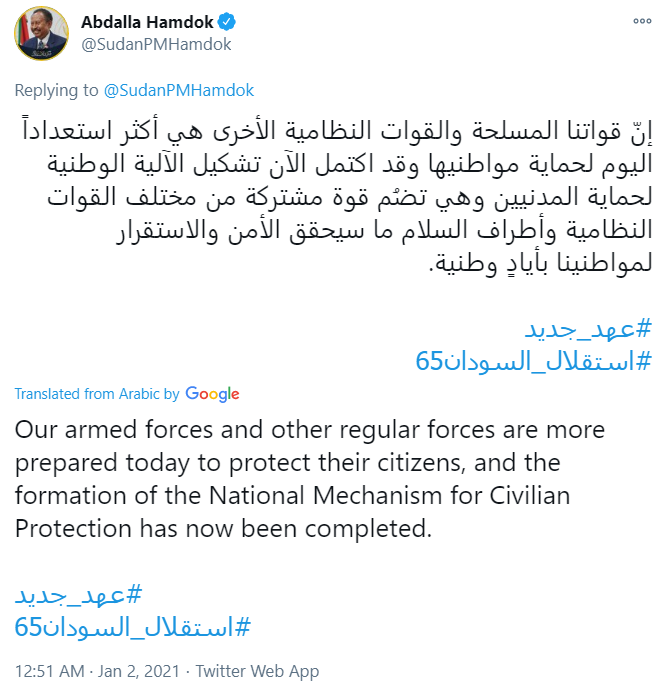 "It was also announced that the Council of Ministers had approved the ratification of the International Convention against All Forms of Torture and the International Convention for the Protection of All Persons from Enforced Disappearance, leaving only to approve them through the joint meeting of the Sovereignty Council and the Ministers until they become effective," Hamdok said on Friday.

This comes after the United Nations recently confirmed the closure of the UN-African Union Mission in Darfur (UNAMID), which followed the unanimous adoption of a Security Council resolution on December 22. The Sudanese government and two armed groups based in Darfur reached a historic agreement in October, which resulted in the United Nations announcing the closure of its mission in the country.

"In addition to taking on the responsibility of civilian protection, the Sudanese Government will also assume the primary role in supporting the peace process, facilitating the delivery of humanitarian assistance, and supporting the mediation of intercommunal conflicts," the United Nations had said in a statement after announcing the closure of Darfur mission.

Sudan was pushed into a conflict in 2003 after two rebel groups started an armed revolution against the government of Omar Al-Bashir, whom they accused of oppressing the non-Arab population. Al-Bashir's government launched a military offensive against the rebel groups in Darfur, which also saw the ethnic cleansing of the non-Arab population in the region. Al-Bashir was ousted in 2019 and has been charged with committing crimes against humanity by the International Criminal Court.

Sudan was recently removed from the United States' list of terror sponsors. The US announced that Sudan's designation as "State Sponsor of Terrorism" has been revoked, marking a new beginning of the bilateral relationship between Washington and Khartoum. Sudan was added to the list in 1993.