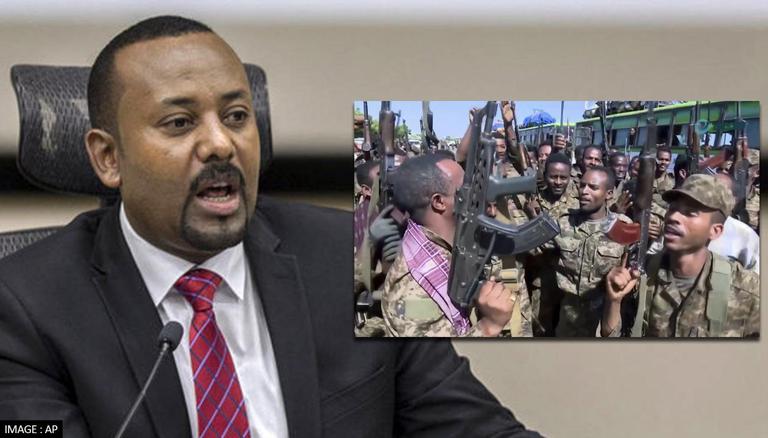 
The Prime Minister of Ethiopia Abiy Ahmed has recently urged civilians of the nation to pick up arms in order to stop rebel militants from further advancing. As per a BBC report, Prime Minister has made the announcement on Facebook after insurgents from Tigray's northern region apparently took control over other towns in Amhara.

The Tigray People's Liberation Front (TPLF) which is the former ruling party of Ethiopia, claims that its goal is to lift the blockade on the northern province. Further, PM Abiy claimed in a statement on Sunday, that the rebels' progress was driving the nation to its destruction. The year-long battle between the Ethiopian Administration and TPLF has resulted in a humanitarian disaster. The United States has asked for a truce but those efforts remain unanswered.

Citing the translation on the Addis Standard news site of Abiy Ahmed's statement, BBC reported that the Prime Minister asked residents to "organise and march through (any) legal manner with every weapon and power... to prevent, reverse and bury the terrorist TPLF". The remarks of PM Ahmed came after rebels allegedly took control of the vital towns of Dessie and Kombolcha in Amhara region, which is just over 300 kilometres north of Addis Ababa.

Furthermore, the Ethiopian government has stated in a tweet on Monday that the insurgents "summarily executed more than 100 youth residents" in the Kombolcha district, but, the TPLF has still not responded to the tweeted statement, even the deaths have not been confirmed, BBC reported. As communications have been limited in the nation, it has been hard to clarify the allegations which have been made by the two parties who are involved in the battle.

US Secretary of State raises concern over Tigray crisis

In addition to this, the United States Secretary of State Antony Blinken has voiced concern over the increasing confrontation in the nation. Continuing the conflict, he stated in a tweet, will only exacerbate the severe humanitarian disaster in northern Ethiopia. He wrote, “All parties must stop military operations and begin ceasefire negotiations without preconditions.”

The United States is alarmed by reports of the TPLF takeover of Dessie and Kombolcha. Continued fighting prolongs the dire humanitarian crisis in northern Ethiopia. All parties must stop military operations and begin ceasefire negotiations without preconditions.

According to the United Nations, thousands of people have already died in the conflict, millions have been relocated, and hundreds and thousands are suffering hunger.

In November 2020, when Ethiopia's PM Ahmed Abiy authorised a military operation against regional troops in Tigray, the conflict began between the parties. PM stated that he gave the order in retaliation for an assault on a military installation in the area that housed government forces. After months of squabbling between Abiy's administration and members of Tigray's leading political party, the TPLF, the violence intensified. The TPLF was then labelled a terrorist organisation by the government, who barred any peace negotiations with them.