The new president of Libya, Menfi, was elected for the position of interim leadership for the transitional unified Libyan government alongside Abdul Dbeibah.

Newly designated President of Libya of the UN-hosted interim administration arrived in Benghazi, Wednesday, from Athens. In an attempt to cement relations between the divided country’s eastern and western factions ahead of December polls, Mohammad Younes Menfi, chairman of Libya’s Presidential Council, entered the eastern factions’ stronghold after nearly three years. In a campaign to foster unity, Menfi met with academicians, activists, and tribal elderly at the airport’s VIP lounge, according to sources of Associated Press. The new president of the North African country, Menfi was elected for the position of interim leadership for the transitional unified Libyan government, alongside Abdul Hamid Mohammed Dbeibah, designated as the prime minister in the Presidency Council at UN-sponsored meeting in Switzerland, Geneva.

Acting UN special envoy for Libya Stephanie Williams had told delegates that the challenges were not behind them, as UN-sponsored political mechanism to put end to the country’s decade-long conflict. “We’ll be watching those you have selected to make sure they truly go back to the Libyan people on Dec. 24 of this year, to democratically elect Libya’s representatives and political leadership,” Williams said. Libya’s new unified executive, according to the UN’s agreement, was tasked with comprehensive national reconciliation "based on transitional justice principles and promoting the culture of amnesty and tolerance in parallel with truth-seeking and reparations.” The interim administration was also assigned with tackling Libya’s economic crisis due to war and the COVID-19 pandemic.

Acting SRSG announces the winning candidates for the Presidency Council and Prime Minister positions for the temporary period. #LPDF https://t.co/AqBs22NnnW

Menfi, Libya’s east diplomat, won 39 votes to the 34 in a second round of voting Friday. Meanwhile, Prime Minister Dbeibah, Libya al-Mostakbal movement’s founder had led Libya’s Investment and Development Company under ousted ruler Muammar Gaddafi, according to press reports. In 2011, Libya descended into a political crisis after a Nato-supported armed revolt toppled the country’s 42-year long leader Muammar Gaddafi. The country, since then, fell into the hands of competing rival militias, and politicians that divided self-defined government in Tripoli and the Libyan east. The North African nation also turned a hoisting ground for radical Islamic rebel groups and terrorist organizations like Daesh and Al Qaida, with conflict intensifying due to the influx of arms. Last week, a 75 UN picked delegates, the Libyan Political Dialogue Forum elected Menfi, Mossa Al-Koni, Abdullah Hussein Al-Lafi, and Dbeibah as a temporary executive authority in the country. 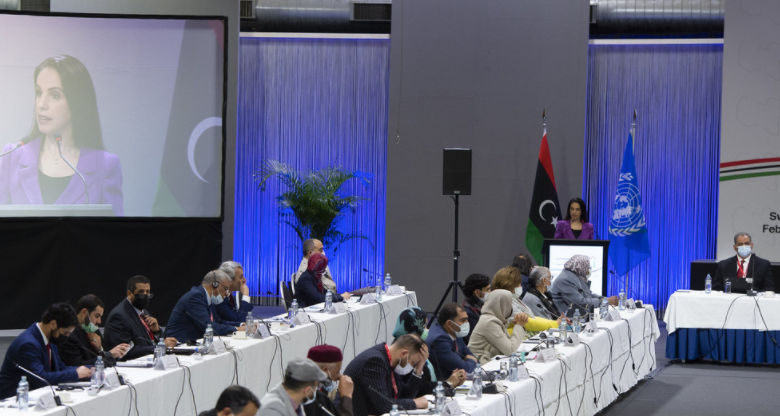 In a fresh stir, following the UN’s constitutional path dialogue meetings to resolve the Libyan crisis, a pro-Haftar politician Aguila Saleh reportedly appealed that the new Presidential Council and the government shall be based in Sirte and work under the armed forces that belong to warlord Khalifa Haftar and Libyan 5+5 Joint Military Commission. In another move condemned by the UN, Saleh proposed a change in capital Tripoli.