In spite of the city's stay-at-home orders, anti-lockdown riots erupted in Melbourne, with about 1,000 violent protestors overwhelming the police officers. 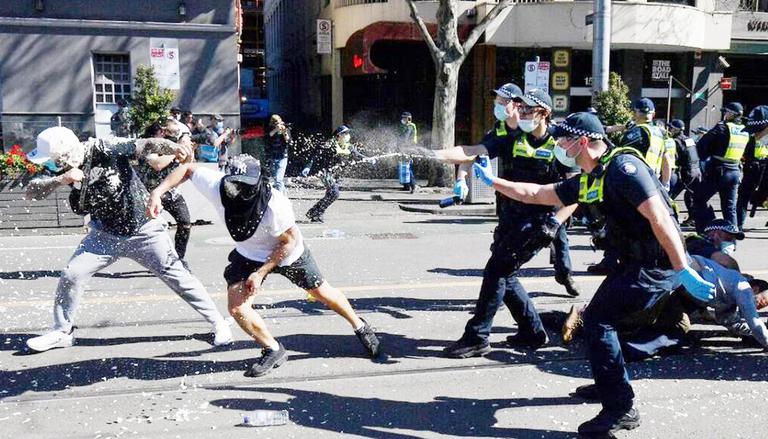 
In spite of the city's stay-at-home orders, anti-lockdown riots erupted in Melbourne, with about 1,000 violent protestors overwhelming the police officers and swarming the streets. Australian police used pepper spray to disperse the protesters. There were minor scuffles as well as a violent clash involving a group of demonstrators. A number of people were detained.

The majority of the protesters disobeyed the rules by refusing to wear masks. To prevent the rally from going ahead in violation of public health regulations, 2,000 police officers were stationed at road checkpoints and barricades, as well as on roving patrols.

MELBOURNE AUSTRALIA: Dramatic scene from an Anti Lockdown protest as Australians continue to fight for their freedom

Around 235 people were arrested by the police and while the majority of detained were taken away for violating health orders, others were accused of assault, disorderly conduct, and weapons and narcotics offences. During the protests, 10 police officers were hurt, with injuries including a broken elbow and nose, a broken finger, and torn muscles. Six officers were brought to the hospital for treatment. Bottles and stones were thrown at officers, according to Victoria Police Commander Mark Galliott.

According to Daily Mail, he told the media on Saturday that the "angry aggressive young males" were there to attack the police and not to demonstrate liberties. Before the protests became violent, demonstrators gathered outside the Richmond Town Hall on Bridge Road at lunchtime, screaming "free our children" and "you serve us." As the crowd approached Burnley Street, police were forced to deploy pepper spray before arresting dozens of demonstrators amidst insults and abuses.

The 6th lockdown in Melbourne began on August 5

The 6th lockdown in Melbourne began on August 5. Melbourne is the state capital of Victoria, which recorded 535 new infections and one COVID death in the last 24 hours. Although the vast majority of Australians favour vaccines and public health measures, there have been violent protests against the pandemic's management.

READ | AUKUS submarine row: France recalls envoys to US, Australia; calls pact 'stab in the back'