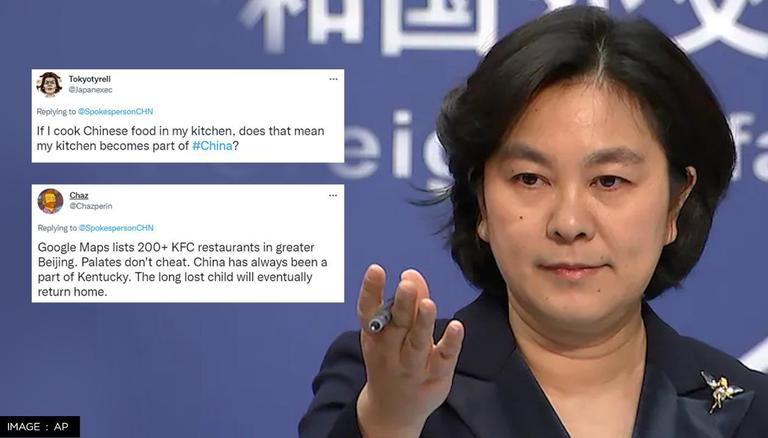 
A senior Chinese foreign ministry official drew backlash for citing dumpling restaurants to assert Beijing's claim on Taiwan. Chinese Foreign Ministry spokesperson Hua Chungying, who had said previously that Washington would ‘pay the price’ for ‘hurting’ Beijing with US House Speaker Nancy Pelosi’s visit to Taipei, took to Twitter, on Sunday, to use restaurant listings to assert that the self-ruled democratic island belongs to the mainland.

China has launched a range of verbal attacks on the United States in the aftermath of Pelosi’s unannounced visit to Taiwan and Hua is one of the most senior officials to directly attack Washington. However, as the war of words continued, the Chinese Foreign Ministry spokesperson’s late-night tweet on August 7 prompted a storm of ridicule online. She even referred to the island as a “long lost child” who will return to her “home” which is China.

Baidu Maps show that there are 38 Shandong dumpling restaurants and 67 Shanxi noodle restaurants in Taipei. Palates don't cheat. #Taiwan has always been a part of China. The long lost child will eventually return home. pic.twitter.com/p50RXund9T

Ever since Pelosi concluded her unannounced, 18-hour-long, trip to Taiwan and reiterated America’s support for the island’s sovereignty despite China’s assertiveness, Beijing’s officials have declared a range of “countermeasures” including trade restrictions on Taipei, conducting large-scale military drills around the island nation and pulling out of key talks with the US. And even though China has threatened to use the military to claim Taiwan, Hua’s latest claim about dumpling restaurants is being mocked for Beijing’s “logic” for territorial gains.

Hua's take on Taiwan belonging to China met with mockery across the globe. Netizens posted different restaurant listings to state that 'China always belonged to the USA' because "palates don't cheat". One of the internet users wrote, "If I cook Chinese food in my kitchen, does that mean my kitchen becomes part of China?"

If I cook Chinese food in my kitchen, does that mean my kitchen becomes part of #China?

So Taiwan is a part of America, Japan, Italy and Korea? pic.twitter.com/cVPqmTWnTt

"Baidu Maps shows that there are 3,500 McDonald's and 8,500 KFCs in China. Palates don't cheat. #China has always been a part of USA. The long lost child will eventually return home.

And how many Japanese restaurants are there in Mainland China? More than 40,000? Oh, so #China has always been a part of Japan. The long lost Child will eventually return home. pic.twitter.com/u8xm477gi1

There are over a 100 chinese Restaurants in Frankfurt. So that means, that China is part of Germany!

There are over 100 ramen restaurants in Taipei, so Taiwan is definitely a part of Japan. pic.twitter.com/UN6JkwJLel

China warns US will 'pay the price' of 'hurting' Beijing

The Chinese Foreign Ministry on Wednesday warned that Washington would now bear the "consequences". Defying all such threats by China, Pelosi became the first US House Speaker to visit the self-ruled democratic island since 1997, stoking fresh tensions between both nations.

READ | Apple asks suppliers in Taiwan to label products as 'Made in China' amid tensions: Report

During the high-stakes trip, while Pelosi reiterated America's commitment to protecting Taiwan's security and sovereignty, China's Foreign Ministry spokesperson Hua Chunying said that the motive behind Washington's measure was not about democracy. The Chinese diplomat also reiterated that Pelosi's visit was a clear provocation to China's integrity and declared that the United States "will be held liable and pay the price for hurting" Beijing.

The Chinese Foreign Ministry spokesperson said, "The nature of her [US Speaker Nancy Pelosi] visit to the Taiwan region is not about democracy. This is an issue about China's sovereignty & territorial integrity". Earlier, Hua issued a statement denouncing Pwlosi's trip and saying that any response that Beijing would take now would be “justified” as well as “necessary”. Defying all threats from China and showcasing support for Taipei, the US House Speaker’s unannounced visit to the island has now pushed Washington-Beijing ties to a new low.