The incident occured five years ago, when an allegedly unlicenced building in Shanghai was fully covered with the pictures of the President of China. 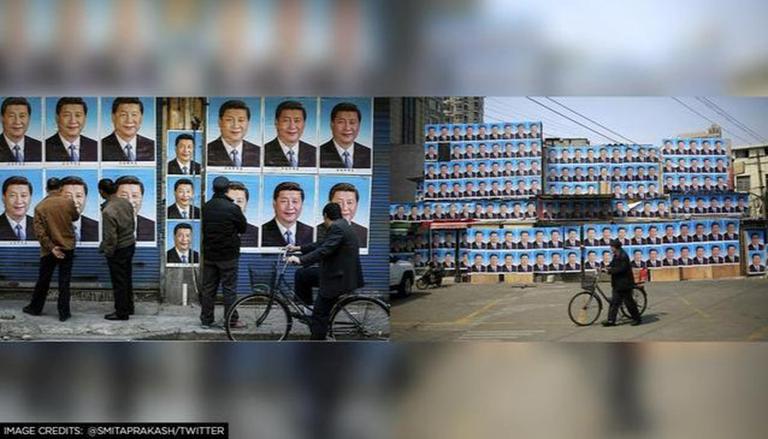 
Social media was left pining on the wit of a ‘smart citizen’ in China who saved his house from being bulldozed by pasting the posters of the man who is most feared in the country, the supreme leader of the Communist Party and Chinese President Xi Jinping. The visuals of a house entirely covered with the posters of Xi Jinping amused netizens once again, and the pictures of the same went viral on Wednesday, September 22, which were originally taken in 2016.

The incident occurred five years ago when an allegedly unlicenced building in Shanghai was fully covered with the pictures of the President of China. The building that was scheduled to be crushed down, was protected as the posters of President Xi Jinping shielded it for some time. A few days later, pictures of policemen removing the posters from the house surfaced on social media, however, there was no update on the prefabricated building.

A Shanghai homeowner was told his home is going to be demolished. His move was to post portraits of Xi all over his house. Now if the house is demolished, Xi’s portrait will also in turn be torn down. pic.twitter.com/kqHulDuqhh

The pictures are being widely circulated on social media. While some people said that the posters were affixed to the structure in the same way as images of gods were once affixed to the doors of properties to ward off evil spirits, others compared it to history. The historic resemblance of the event was found during the ‘Cultural Revolution’. The placing of Xi Jinping's photograph on the building's exterior recalled an occurrence during the Cultural Revolution in which individuals covered cultural artefacts and items with portraits of former Chinese President Mao Zedong to prevent them from being destroyed by Red Guard members.

Some people commended the idea and said that the citizen’s move was very smart and protected his house from falling apart. Another user suggested that for a more permanent solution, he should change his home into a museum of Xi Jinping. A third sarcastically wrote, “Xi what you did there”?

For a more permanent result, he should convert his home into a museum for Xi Jinping Thought

Xi what you did there

Meanwhile, some Indian fans of the Chinese citizen were also spotted, who were quick to say that in no time, the concept will be adopted by Indians. Smitha Prakash, ANI Editor, wrote, “Just wait and watch how Indians adopt the same route.”

Another compared the concept to the one projected by Aamir Khan in his movie PK.

He pulled a PK! Well played.

Amir Khan self defence with sticker of God https://t.co/AVAbVPcYzv

WE RECOMMEND
China's President Xi Jinping takes a dig at United States over Afghanistan withdrawal
Amid growing concerns over China, here are pacts that nations formed to counter Beijing
Xi Jinping's reluctance to step foot outside China flares rumours over health condition
Explained: What is China's Evergrande Crisis? How could it affect global markets?
Growing bipartisan consensus in US that China represents competition: Dhruva Jaishankar