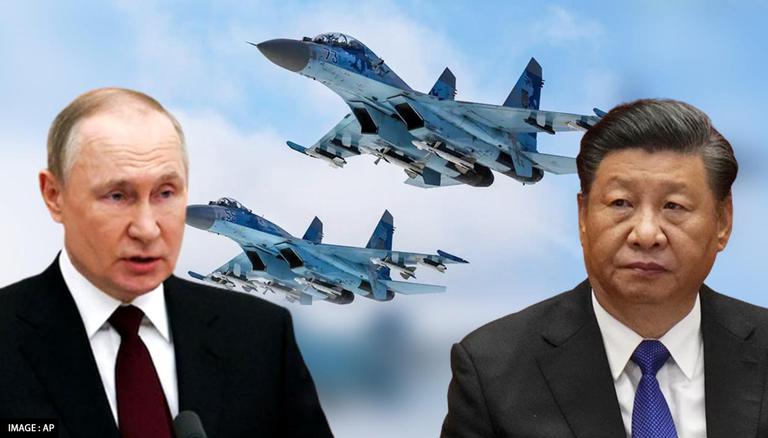 
The Air Forces of China and Russia held 'regular joint strategic patrols' over the Sea of Japan, the East China Sea and the West Pacific Ocean on Tuesday according to the two sides’ yearly military cooperative plan, the Chinese defence ministry has confirmed, validating Japan's move of scrambling its own jets due to the provocation at the time of the Quad Summit in Tokyo.

The Chinese Defence Ministry stated, "Air forces of China and Russia held regular joint strategic patrols above the Sea of Japan, the East China Sea and the West Pacific Ocean on Tuesday according to the two sides’ yearly military cooperative plan."

In addition, China's People's Liberation Army (PLA) Navy sent warships simultaneously through two strategically important straits in the Northwestern and Southwestern regions of Japan, reported Beijing's mouthpiece Global Times. The report also claimed this comes at a time when US and Japanese leaders made "provocative" remarks on China.

It is also being learned that at least 300 aircraft sorties were carried out in 20 days, making it the longest and most sortie-intensive exercise by the Chinese carrier in the West Pacific. The exercise was carried out to display the PLA's capabilities to deal with potential US or Japanese intervention with regards to Taiwan.

Meanwhile, earlier in the day, right outside the Japanese Parliament, where the Quad member nations' leaders were holding meetings, the civilians could be seen holding banners, flags, and posters in a bid to send out their message to China. Some of the banners read "Hong Kong Independence" "Revolution", and "Stop Uyghur Genocide".

READ | Territory, Trade and Taiwan: All QUAD states have their own battles with China | Read

Japanese Defence Minister Nobuo Kishi informed that in response to Beijing's alleged aggression, the nation scrambled its jets after Russian and Chinese warplanes came in close proximity to its airspace on Tuesday as Tokyo hosted the Quad leaders. Kishi informed that the the move by Russia and China was a likely provocation amid the ongoing summit. Earlier on Tuesday, Japanese Prime Minister Fumio Kishida attacked China and avered that the Quad countries are committed against any “unilateral change of status quo by force”, mainly in the Indo-Pacific region. Following the in-person meeting between Kishida, Prime Minister Narendra Modi, USA President Joe Biden and Australia's newly-elected MP Anthony Albanese, the Japanese PM referred to the Russia-Ukraine war to underscore the importance of “free and open” Indo-Pacific, a longstanding aim of the Quad leaders.

On May 23, US President Joe Biden proclaimed that Washington will “intervene militarily ” if China invaded Taiwan, adding that the need to protect the self-ruled island is even stronger after Russia invaded Ukraine. When a reporter in Tokyo asked Biden, "Very quickly, you didn't want to get involved in the Ukraine conflict militarily for obvious reasons. Are you willing to get involved militarily to defend Taiwan if it comes to that?" To this, the United States President replied, "Yes." “We agreed with the One China policy, we signed on to it, but the idea that it can be taken by force is just not appropriate,” US President Biden asserted. The US is bound to intervene on Chinese action on Taiwan as per a long-standing treaty, though the same treaty is also void if Taiwan asserts its independence or there are any violations of the status-quo, i.e. the 'One China policy'.