Belarus on May 23 forced a Ryanair flight carrying a wanted opposition activist to land in the capital Minsk, provoking a furious outcry from world leaders. 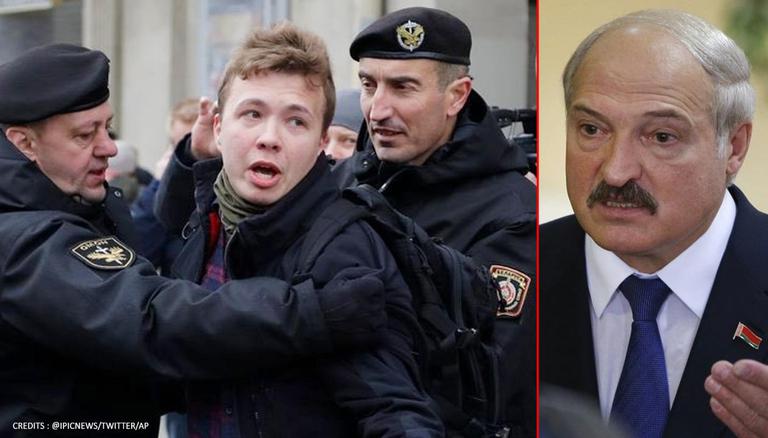 
Belarus on May 23 forced a Ryanair flight carrying a wanted opposition activist to land in the capital Minsk, provoking a furious outcry from world leaders who described it as “state terrorism”. According to BBC, Roman Protasevich, a 26-year-old dissident journalist, was detained before the plane was allowed to resume its flight. A MiG-29 escorted the jet to Minsk because of a bomb scare, however, no explosives were found.

The plane from Greece to Lithuania was diverted to Belarus for several hours. Arriving passengers said that they had been given no information about the reason for the abrupt diversion to Minsk. In a statement, the airline said that the crew of Flight FR4978 had been “notified by Belarus (Air Traffic Control) of a potential security threat onboard and were instructed to divert to the nearest airport, Minsk”.

Greece and Lithuania put the number of passengers on board at 171. It was noted that the Ryanair statement did not mention that Protasevich didn’t continue to Lithuania, instead it said that the aircraft departed together with passengers and crew after approximately seven hours on the ground in Minsk. The flight was en route from Athens to Vilnius when it turned east to Minsk shortly before it reached the Lithuanian border. According to the Flighttrader24 website, the flight path suggested that the plane was actually nearer to Vilnius than Minsk when it turned.

Belarus state-owned news agency Belta reported that President Alexander Lukashenko had personally given the order for the plane to land in Minsk following the bomb alert and approved despatching the MiG-29 fighter jet. The incident has angered many and even called for the EU and NATO to intervene. UK Foreign Secretary Dominic Raab warned the “outlandish action” would have “serious implications”.

‘Attack on freedom of expression’

EU chief Ursula von der Leyen also called the incident “outrageous and illegal” and further warned of consequences. US Secretary of State Antony Blinken “strongly” condemned the Belarusian regime’s “brazen” act and demanded an international investigation. Ukraine’s foreign ministry spokesperson, on the other hand, called the incident an “attack on freedom of expression”.

The outrageous and illegal behaviour of the regime in Belarus will have consequences.

Those responsible for the #Ryanair hijacking must be sanctioned.

The UK is alarmed by reports of the arrest of @nexta_tv journalist Roman Protasevich & circumstances that led to his flight being forced to land in Minsk. We are coordinating with our allies. This outlandish action by Lukashenko will have serious implications.

Alarming reports about a @Ryanair plane that was diverted to #Minsk. All passengers must be allowed to continue their travels & we need an independent international investigation into this incident. We urgently demand the release of activist Roman #Protasevich.

More worrying news coming from Belarus as we learned Belarusian journalist Roman Protasevich has been detained in Minsk. This is yet another attack on freedom of expression by Belarusian authorities. We demand his immediate release. While in detention, his rights must be upheld.

We strongly condemn the Lukashenka regime's brazen and shocking act to divert a commercial flight and arrest a journalist. We demand an international investigation and are coordinating with our partners on next steps. The United States stands with the people of Belarus.

Following the ”hijacking”, both Latvia and Lithuania said that the airspace over Belarus should be recognised as unsafe. Latvia’s Foreign Minister even said that the Belarusian airspace should be closed to all international flight. Moreover, European Council chairman Charles Michel said EU leaders would discuss "this unprecedented incident at a Council summit and it would not "remain without consequences". NATO Secretary-General Jens Stoltenberg, on the other hand, called the incident “serious and dangerous”.