Belgium: Local Uygur community in Belgium's Antwerp came on the streets to protest against the Chinese govt's approach towards Uyghur Muslims in Xinjiang. 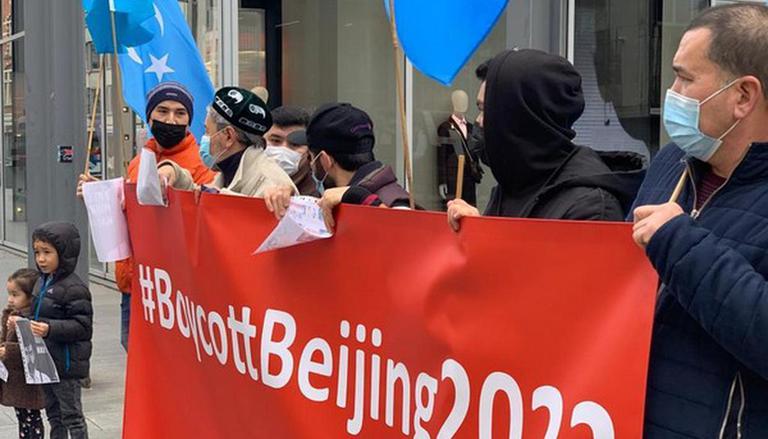 
The local Uygur community in Belgium's Antwerp city took to the streets on Tuesday, January 4 to protest the Chinese administration's approach towards Uyghur Muslims and other ethnic minorities residing in China's Xinjiang province. The Belgium-based local Uygur community also raised slogans against Beijing and appealed to European nations to boycott the upcoming Beijing Winter Olympics, scheduled to be held in February.

During the protest, the Uygur community led by local leaders also waved flags and posters, waved placards with hashtags such as #BoycottBeijing2022. The demonstrators raised slogans against the Chinese authorities to stop atrocities against the Uyghur Muslims in the Xinjiang region. Notably, the United States and a few other countries have planned to boycott the Beijing Winter Olympics over the so-called "genocide" of Uyghur Muslims.

Meanwhile, a US-based Uyghur rights activist has called on Europe to uphold its values and take necessary action against Chinese officials in Xinjiang province. Earlier in 2021, the United Nations was the first country to raise its voice against atrocities against the ethnic Muslim groups in Xinjian province. In February last year, the Canadian and Dutch parliaments also adopted motions recognizing the crisis faced by the Uyghur Muslims and declaring it a "genocide". The United Kingdom also declared China's ongoing crackdown as a "genocide".

Nearly 12 million Uyghur Muslims reside in the Xinjiang Uyghur Autonomous Region (XUAR), and activists and internal communities claim that around 1 million Uyghurs and other Muslim minorities who reside in the Xinjiang region have been forcefully kept in detention camps, which the Communist regime calls "re-education camps." The minority groups living in China have often been subjected to extreme exploitation, forced labour, rapes of girls and women, and assaults, among other activities. However, the Chinese government has always denied the accusations and said the camps were established for job training. The

United Nations has been at the forefront of accusing the Xi Jinping-led government of committing genocide in Xinjiang. The US has also imposed a ban on the import of goods from the Xinjiang region unless the Chinese government proves that the products are not manufactured through forced labour.