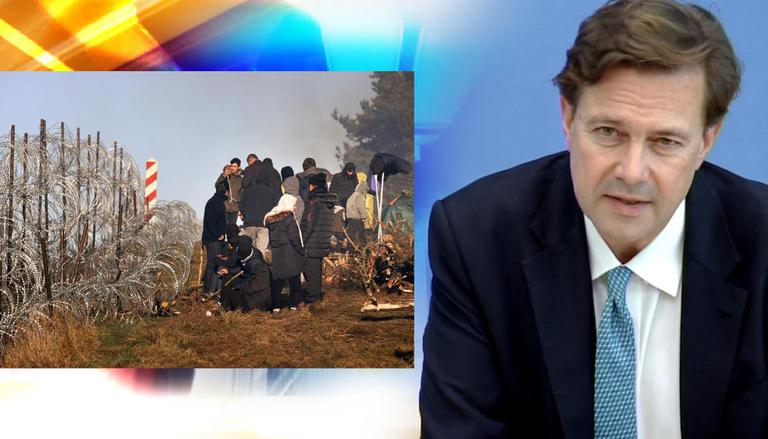 
Following the increased influx of undocumented migrants along the eastern borders of Poland, the European Union (EU) on Wednesday accused Belarus of sponsoring "trafficking" of human lives with false promises. A spokesman for German Chancellor Angela Merkel, Steffen Seibert on Wednesday stated that Minsk is engaged in "state-run smuggling and trafficking...100% at the expense of the people who are lured into the country with false promises," the Associated Press reported. Siebert's remarks come after Merkel engaged in a phonic conversation with Russian President Vladimir Putin, asking him to "exert his influence" on Belarusian President Alexander Lukashenko as "people are being used" in the country.

The EU member countries like Poland, Latvia, and Lithuania have recorded a blasphemous rise in the number of migrants accumulated along the borders attempting to breach borders in the past few months. As of November 9, Polish authorities blocked at least 2,000 migrants trying forcefully to enter Poland. Video footage surfaced on the internet showing migrants hurling logs of wood at Polish border forces. Reportedly, several asylum seekers living in tents along the border died in recent weeks as temperatures began to slump below zero.

EU's accusations come a day after Poland Prime Minister Mateusz Morawiecki lambasted Putin, blaming him for orchestrating an attack with a wave of migrants. Calling it a part of a "bigger operation," PM Morawiecki stated that he was convinced of a potential coordinated attack...or a new kind of war, in which people are used as living shields." He also alleged that Belarus is being helped by the "enabler" Putin with a "special purpose of destabilising the situation in the EU," in what is described as "hostile conduct" by Warsaw.

Meanwhile, German interior minister Horst Seehofer also accused Lukashenko of "using people's fates"- an attack aimed at triggering a political crisis. Echoing the concerns of Germany, Latvian PM Krisjanis Karins also said that the situation is "what I call a state-sponsored human trafficking, which is affecting directly my country, Lithuania and Poland."

Both Belarus and Russia have rejected assertions made by the EU members. Calling the comments "absolutely irresponsible and unacceptable," Kremlin spokesperson Dmitry Peskov said that Moscow has no responsibility whatsoever in the crisis. Meanwhile, Russian Foreign Minister Sergey Lavrov suggested that the migrant flow could be controlled if the EU allowed financial aid to Belarus.