France calls for mobilization, to commemorate those attacked in the wave of Islamist violence and vouch for the freedom of expression in national cohesion

Across France, there have been demonstrations in support of the freedom of expression and people are participating in the ‘national cohesion’ rallies post French history teacher’s beheading after he discussed caricatures of Islam’s Prophet Muhammad. This comes after French President Emmanuel Macron and French Interior Minister Gerald Darmanin denounced the killing of Samuel Paty in Conflans-Sainte-Honorine and France’s anti-terrorism prosecutor’s office announced the arrest of nine suspects in relation to the case.

According to sources of France 24, the Paris suburbs will organize the rallies in a display of solidarity and defiance outside the school where the gory incident against Samuel Paty occurred. The French call for mobilization, and stand to commemorate those attacked in the wave of Islamist violence and vouch for the freedom of expression in national cohesion. Education minister Jean-Michel Blanquer told France 24 that it was now absolutely important more than ever post the attacks on the satirical magazine Charlie Hebdo editorial staff and on history professor that citizens tended support to vote against fundamentalism. 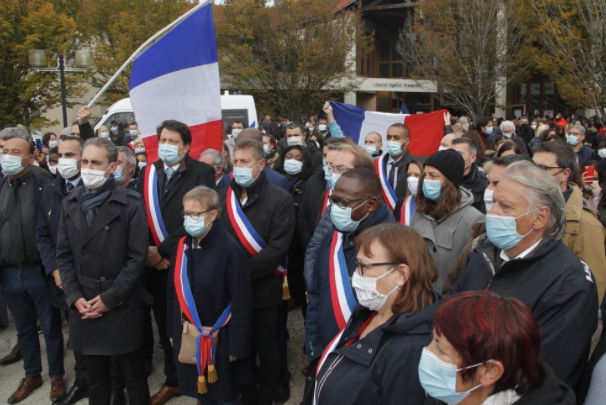 [Local mayor Laurent Brosse, third left, and deputy mayors sing the national anthem outside the school where a slain history teacher was working, Saturday, Oct. 17, 2020, in Conflans-Sainte-Honorine, northwest of Paris.]

A rally was being organized at Place de la République in Paris where an estimated 1.5 million people had marched in 2015 when Islamist gunmen attacked the satirical weekly print Charlie Hebdo on January 7 armed with rifles shooting 12 in the 20th arrondissement office, brutally killing the magazine’s publishing director Charb. Not letting the freedom-of-expression watered down, the freedom movement will have demonstrators in Lyon, Toulouse, Strasbourg, Nantes, Marseille, Lille, and Bordeaux. According to sources of France 24, the 18-year-old accused Abdullakh A, who was shot dead by the police had long targeted Paty in the online threats. 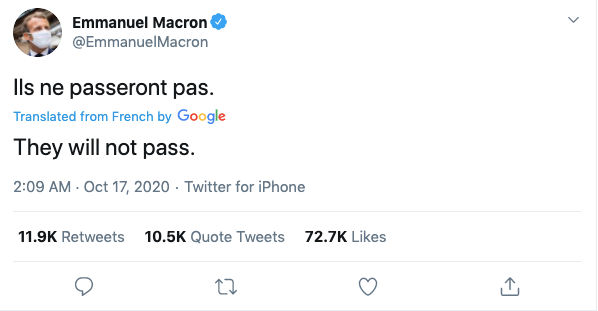 Member of IS in Syria

France's anti-terror prosecutor Jean-Francois Ricard told Associated Press that another Moscow-born suspect granted a 10-year residency in France as an immigrant was also under arrest. The half-sister of the accused revealed that he had been a member of the Islamic State group in Syria in 2014. Twitter account under the name Abdoulakh A had posted decapitated head minutes after the gruesome attack with a message, “I have executed one of the dogs from hell who dared to put Muhammad down.” 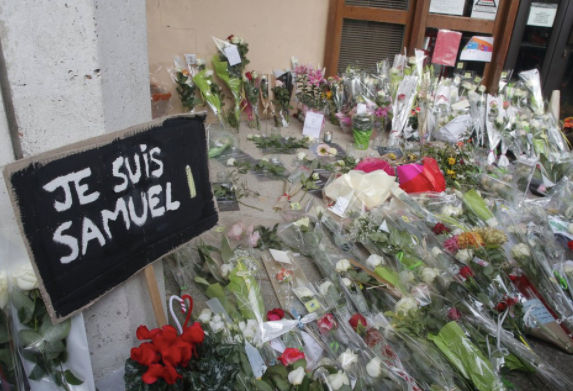 [A poster reading "I am Samuel" and flowers lay outside the school where slain history teacher Samuel Paty was working, Saturday, Oct. 17, 2020 in Conflans-Sainte-Honorine, northwest of Paris.] 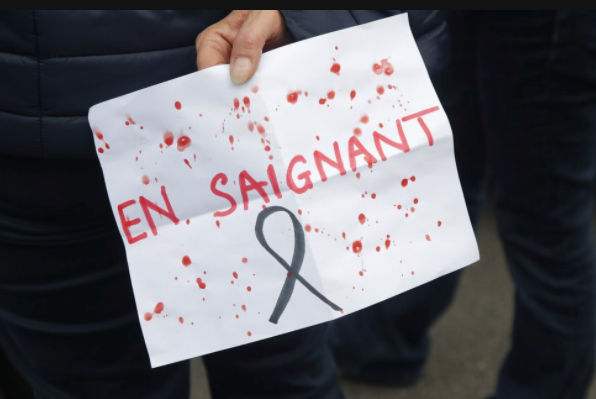 [A person holds a poster reading "Bleeding", playing with the French word for Teacher, outside the school where a slain history teacher was working, Saturday, Oct. 17, 2020 in Conflans-Sainte-Honorine, northwest of Paris.] 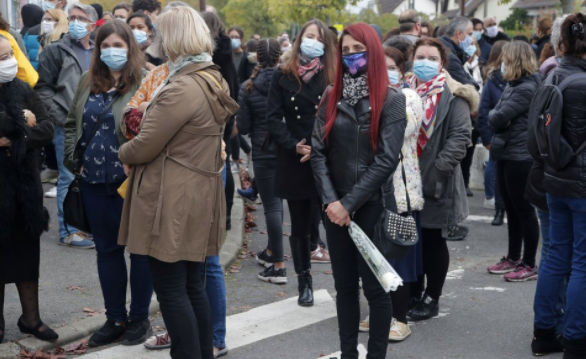 [Residents gather outside the school where a slain history teacher was working, Saturday, Oct. 17, 2020 in Conflans-Sainte-Honorine, northwest of Paris.]

Read: 'Ready For A No-deal': French President Warns Fishermen Must Not Be 'sacrificed' To Brexit