The police officers were also seen briefly waiting for the press photos before walking Greta Thunberg away from the scene, and escorting her into a police car. 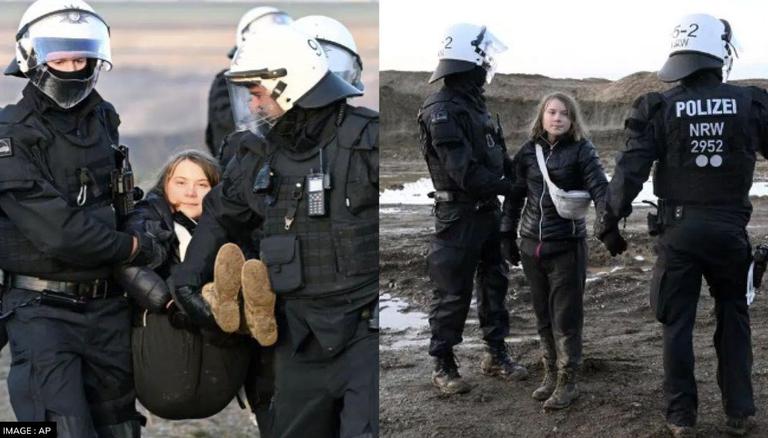 
German police on January 18, Wednesday denied that the arrest of the climate campaigner Greta Thunberg was “staged,” also refuting claims that they were being "extras for Greta Thunberg”. As the detention clip of Thunberg went viral on social media, claims circulated that the Swedish climate activist was held by police only for the cameras as it was "all a setup”.

Thunberg was arrested along with other activists on Tuesday during protests against the demolition of a village for the expansion of the Garzweiler 2 coal mine, located some 9 km (5.6 miles) from the village of Luetzerath, according to German news agency DPA. She was sitting along with several other anti-mining protesters who gathered at multiple locations in the western German state of North Rhine-Westphalia.

Thunberg, however, was released later after her arrest following an identity check, the German police noted in a statement. The German police had warned earlier that those protesting at the site would be legally removed by coercion if they did not move from the site. Her video, now removed by the German police, gained millions of views. Thunberg was seen taken by the officers as she was seen smirking for the camera and smiling while she was being flanked on either side.

READ | Russia authorises Kazakhstan to deliver 3,00,000 tons of oil to Germany via its pipeline

The police officers were also seen briefly waiting for the press photos before walking her away from the scene, and escorting her into a police car. The situation was derided on social media as having some kind of a political motive as Thunberg was seen laughing, signalling to what appears to be another protester on the site as she was carried away by the police. "The fake arrest of #GretaThunberg," a Twitter account by name of TVisCOOL noted, garnering 6.2 million views.

British commentator Adam Brooks, also called the arrest as staged, as he tweeted: "That’s not an arrest, that’s a PR opportunity to get headlines around the world… ‘[P]oor young Greta being frogmarched by big horrible police’ until you watch this video."

"How staged, never believe all you see in the MSM," wrote Brooks.

The fake arrest of #GretaThunberg

All set up for the cameras. pic.twitter.com/IViYGTXnG9

"All set up for the cameras,” it went on to add. "Greta Staged her Arrest for Attention," Oli London, a YouTuber meanwhile also noted. She is a puppet of the WEF and George Soros. "They are laughing at the world. Greta, you are a terrible actress, at least try to be a bit more convincing when you get arrested next time."

READ | Explained: How Washington is training Ukrainian troops in Germany & Oklahoma amid war

Greta, who has been victim of conspiracy theories had denied such speculations as she tweeted: "Yesterday I was part of a group that peacefully protested the expansion of a coal mine in Germany. We were kettled by police and then detained but were let go later that evening. Climate protection is not a crime".

The German government struck a deal with the energy company RWE last year to expand the coal mine in order to meet the energy needs that would require the destruction of a village.  Coal is currently needed to ensure Germany’s energy security amid the ongoing Russia war as the EU imposed sanctions that have cut off imports of Russian gas. The environmentalists, although, have been protesting against the plan, stating that it would lead to massive greenhouse gas emissions.