Germany has completed its military pullout from Afghanistan, the country’s Defense Ministry announced on Tuesday, bringing back roughly 1,500 troops. 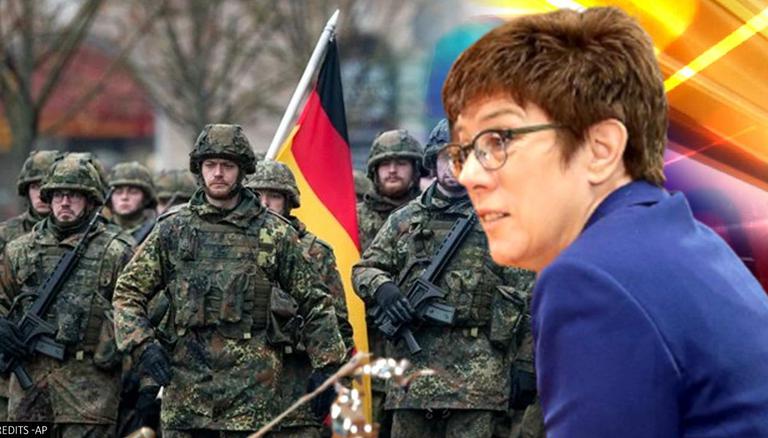 
Germany has completed its military pullout from Afghanistan, the country’s Defense Ministry announced on Tuesday, bringing back roughly 1,500 troops from the war-torn Asian state as a part of a tripartite agreement. German troops, a part of NATO collision had been stationed in Afghanistan for nearly two decades but a US-led withdrawal, announced by President Joe Biden in April, led to Bundeswehr’s return. The US, itself has successfully pulled out over half of its troops ahead of the September 11 deadline.

German Defense Minister Annegret Kramp-Karrenbauer, in a statement, said “After nearly 20 years of deployment, the last soldiers of our Bundeswehr have left Afghanistan this evening. They are on the way back.” 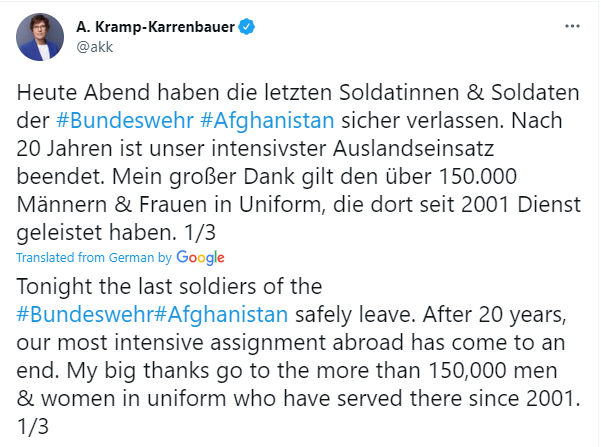 Terming it as an end to a “historic chapter” in the country’s history, the minister offered gratitude to all 150,000 men and women who had served in Afghanistan since 2001. Stressing that Bundeswehr had proven itself in combat, she said that they could be “proud” of their services. "An intensive deployment that challenged and shaped the Bundeswehr, in which the Bundeswehr proved itself in combat," she added.

The soldiers of the Bundeswehr have in #Afghanistan fulfills all the tasks that the Bundestag has given them. You can be proud of this commitment.

'You will not be forgotten'

The German lawmaker also highlighted the contribution of "the fallen and their families" and/or those soldiers who suffered wounds "in body and soul" battling terrorism and insurgency on the Afghan soil saying, “We owe them the greatest respect and thanks. You will not be forgotten,” she said.  As per the ministry,  59 German soldiers have been killed since 2001 in the course of their service in Afghanistan. The last of the troops were airlifted out of their base at Mazar-i-Sharif in northern Afghanistan on two German A400 Ms and two US C17s.

READ | Partnership between Afghanistan, US to be sustained: Biden

Germany was one of the largest contributors of troops in Afghanistan, second only to the United States. Britain, Italy and Turkey also have a significant military presence there, the five countries between supplying 6,000 members of the mission, called Resolute Support. A complete pullout will see more than 28,000 troops returning to their home countries, with only Turkish troops remaining.