Poland has terminated the agreement on the supply of Russian gas, which was signed in 1993. The agreement was valid until the end of 2022. 
In a key development, Poland has terminated the agreement on the supply of Russian gas, which was signed in 1993. The agreement that has been ended by the Polish authorities was valid until 2022, EPravda reported. The decision has been announced by the Polish Minister of Climate and Environment, Anna Moskwa on Twitter.

In the tweet, Anna Moskwa highlighted that Moscow's military offensive in Ukraine reaffirmed the Polish government's decision to become independent of Russian gas. Moskwa tweeted, "Poland denounces the intergovernmental gas agreement of 1993 regarding Yamal. Russia's aggression against Ukraine has confirmed the accuracy of the Polish government's determination to become completely independent from Russian gas. We always knew that Gazprom was not a reliable partner." The decision of the Polish government comes after Gazprom suspended the supply of gas to Poland in April. As per the EPravda report, the pipeline between Yamal-Europe operates from Russia through Belarus to Poland and Germany and accounts for a small share of Russian gas supply to Europe. 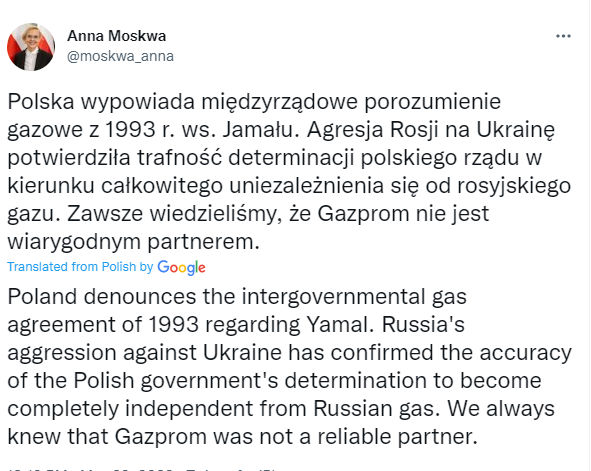 Polish state oil and gas company PGNiG had announced that they had received a letter from Gazprom announcing the suspension of supplies under the Yamal contract. In the statement, PGNiG further stated that they are ready to receive gas from other sources like gas connections on the western and southern borders and the LNG Terminal in Swinoujscie. Meanwhile, the Gazprom had announced halting gas supplies to Poland as it failed to make payments in rubles. It is to mention here that Russian President Vladimir Putin has announced that "unfriendly countries" need to pay in rubles for importing supplies from Russia. Earlier in March, Poland had announced that it will stop purchasing gas from Russia in 2023.

Gazprom fully halts gas supplies to Bulgaria’s Bulgargaz and Poland’s PGNiG due to their failure to pay in rubleshttps://t.co/TriIMjWpyB

It is pertinent to mention here that ever since Russia launched a military offensive in Ukraine, Poland has been supporting Kyiv with financial and defence support. Polish authorities have been also been imposing sanctions against Russia. Ever since the onset of the conflict between Russia and Ukraine on February 24, Poland authorities have welcomed 3,505,890 Ukrainian refugees into their country. Days after the Russian attack on Ukraine, Polish Prime Minister Mateusz Morawiecki on 15 March, visited Kyiv to show support to Ukraine. Furthermore, Polish President Andrzej Duda visited Ukraine on May 22 and addressed the lawmakers in the Ukrainian Parliament.