"Greta, it’s getting quite cold in Davos, when can I expect some global warming?" joked one other reporter, as others also posed jeering questions. 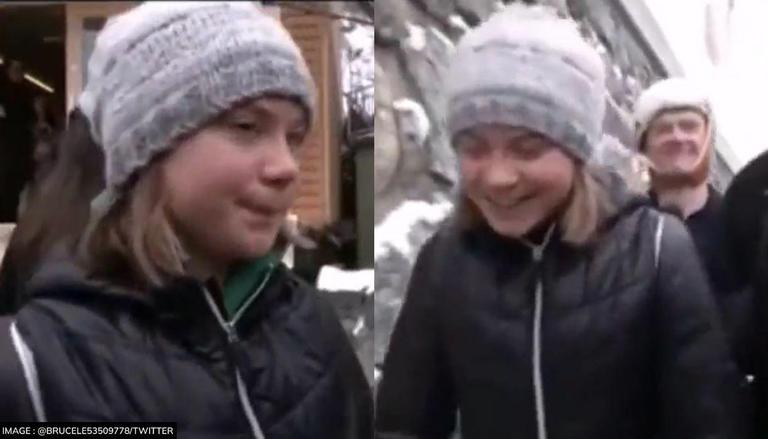 
Swedish climate activist Greta Thunberg was mocked by the reporters in Davos, whom she dismissed with sarcasm and laughter as they posed questions about her activism. Reporters hounded Thunberg joking about her alleged "staged" arrest by the German police at the Lützerath coal mine. The 20-year-old was confronted at the World Economic Forum as she joined other climate activists in a protest, and was seen walking on the outskirts of the Swiss ski resort.

"Greta, how many times did you rehearse your arrest at the German coal mine? Because it looked staged. Is it true?" asked a reporter as Thunberg ignored the question. "Greta, it’s getting quite cold in Davos, when can I expect some global warming?" joked one other reporter, as others also posed jeering questions. Meanwhile, one reporter questioned if Thunberg's arrest in Germany at the site of the coal mine was staged for the cameras. "Greta, Are you a child actor? You are a child actor or an expert, how would you describe yourself?" a reporter asked. One other enquired, "Who was filming your arrest in Germany? Because it looked like you did it on several takes, didn’t you? You were posing with the police."

Greta is in Davos and is asked a real question...
"Greta,it's getting quite cold in Davos,
when can I expect some Global Warming".
Greta breaks into a sudden burst of laughter.... because she knows it's all one big joke. pic.twitter.com/eHG4ZMbCHC

Climate campaigner Greta Thunberg was widely slammed on social media for smiling at the press cameras as she was detained by the German police. Many termed her detention as “staged,” others agreed that it was "all a setup”. Thunberg was arrested by German riot police officers along with other activists as she was protesting against the demolition of a village for the expansion of the Garzweiler 2 coal mine, located some 9 km (5.6 miles) from the village of Lützerath, according to German news agency DPA. She was sitting along with several other anti-mining protesters who gathered at multiple locations in the western German state of North Rhine-Westphalia. Thunberg was released later after her arrest following an identity check.

Greta slams WEF: 'Absurd to listen to them'

As reporters questioned the authenticity of the entire episode, Greta remarked, "It is very likely that German police and RWE fossil fuel company would stage an arrest," shifting the allegations to the coal mine company. "I’m just a young person. I tend to laugh at most things," she said, in explanation for her smirk and laughter whilst being detained and carried away by the police. Thunberg then slammed the political leaders who were attending the World Economic Forum in Davos, saying that it was "absurd" to listen to them while they fuelled "the destruction of the planet".

"Yeah you know, it (World Economic Forum) has not led us anywhere specifically good, has it? We can only look at where we are headed. And these are the people who are in charge. The people who own wealth and who are investing in fossil fuel, etc," said Greta.

"And yet, they are the ones we expect to solve the climate crisis, when it’s people who are affected by it that we should be listening to."