Over one lakh twenty thousand people have been tested positive for the virus and at least 4,000 people have died and over 60,000 have recovered.

Over one lakh twenty thousand people have been tested positive for the virus and at least 4,000 people have died and over 60,000 have recovered.
India records first Coronavirus death
3 weeks ago | March 12, 2020 23:33

Laboratory reports confirmed that the 76-year-old man from Kalaburagi who passed away on Tuesday night had contracted the novel coronavirus. This marks India’s first COVID-19 death since the outbreak of the pandemic. As per the protocol, contact tracing, isolation, and other measures are being carried out. According to the Karnataka Health Department, the Telangana government has been informed about this as he was admitted to a hospital there.

The 76 year old man from Kalburgi who passed away & was a suspected #COVID19 patient has been Confirmed for #COVID19. The necessary contact tracing, isolation & other measures as per protocol are being carried out.

Meanwhile, two new cases of COVID-19 were detected in Maharashtra- one from Mumbai and Thane each. Thus, the total number of confirmed cases in the state rose to 14.

The following are the state-wise helpline numbers for CoronavirusÂ Â 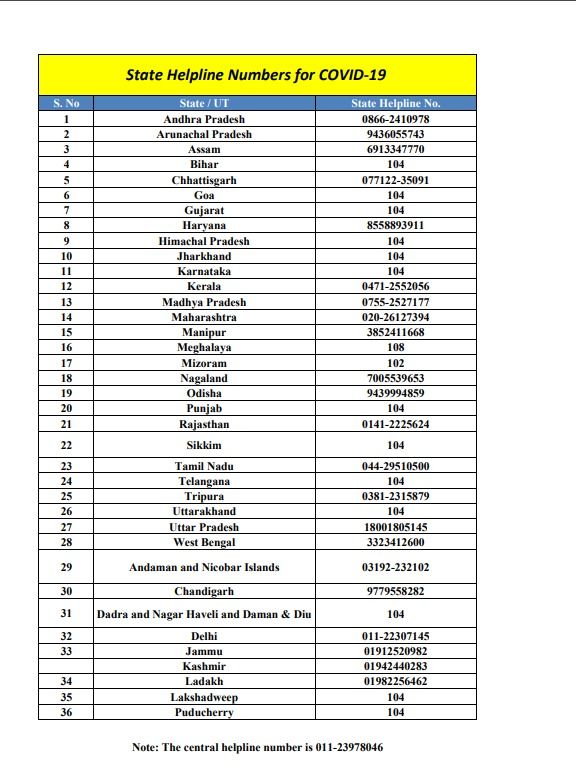 UN chief Antonio Guterres on Wednesday urged world governments to urgently scale up their response to the novel coronavirus if they are to stand a chance of stemming its spread. "Today's declaration of a pandemic is a call to action - for everyone, everywhere," the secretary-general said in a statement.

"We can still change the course of this pandemic -- but that means addressing inaction," he said. "I call on every government to step up and scale up their efforts -- now."  "The best science tells us, if countries detect, test, treat, isolate, trace and mobilize their people in the response, we can go a long way to mitigating transmission," Guterres said. His appeal echoed an earlier one by the World Health Organization, which officially labeled the outbreak a pandemic on Wednesday and blamed its spread and severity on "alarming levels of inaction".

Spain's equality minister Irene Montero tested positive for coronavirus and has been quarantined along with her partner, deputy prime minister and Podemos leader Pablo Iglesias, a government statement said on Thursday. "This morning, all members of the government will undergo testing," it said, indicating the results would be published later in the day.

Trump administration officials, on the defensive about their own handling of the virus, have repeatedly reminded people that the virus started in Wuhan, a city in China's Hubei province, with Secretary of State Mike Pompeo referring to it as the “Wuhan coronavirus.”

The White House said that US President Donald Trump has not been tested for coronavirus since he neither displayed any symptoms nor he has been in close contact with any known confirmed COVID-19 patients. It added that Trump remains in excellent health, and his physician will continue to closely monitor him.

South Korea was the first country to report significant coronavirus numbers outside China, where the disease first emerged and remains one of the world's worst-affected countries despite being overtaken by both Italy and Iran in declared cases.

Scores of events -- from K-pop concerts to sports matches -- have been canceled or postponed over the contagion, with school and kindergarten breaks extended by three weeks nationwide. More than 60 percent of the country's cases are linked to the Shincheonji Church of Jesus, a religious sect often condemned as a cult.

Italy's Prime Minister Giuseppe Conte announced on March 11 that they will be allocating 25 billion euros (USD  28.3 billion) to fight the deadly Coronavirus outbreak that has already killed 827 people in the country. Italy become the epicentre of the viral outbreak in Europe and recently announced nationwide lockdown to help control the spread to the virus.

A spike in cases in the Gulf helped push infections in the Middle East for the new coronavirus past 10,000 cases on Thursday, with most infected people either in Iran or having recently traveled there. Countries in the region have imposed varying levels of restrictions on travel, from the wholesale halting of all commercial flights in Kuwait, to Saudi Arabia banning travel to 39 countries.

Multiple top officials in Iran from its senior vice president to Cabinet ministers, members of parliament, Revolutionary Guard members, health workers, and health ministry officials have contracted the virus. Some of those officials have died. Iran says the virus has killed 354 people and infected some 9,000 people nationwide. There are concerns that the number of infections across Iran is much higher than the confirmed cases reported by the government, which is struggling to contain or manage its spread. The rising casualty figures each day in Iran suggest the fight against the new coronavirus is far from over.

Factories in China are struggling to reopen to reduce the impact of the epidemic, but even with the ruling Communist Party promising help, companies and economists say it may be months before production is back to normal.

Thousands of companies lack raw materials and workers after the most intensive anti-disease measures ever imposed closed factories, cut off most access to cities with more than 60 million people and imposed travel curbs. Beijing is promising tax cuts, though economists say financial help will have limited impact when anti-disease controls still in effect are still keeping workers away from factories and disrupting the movement of goods.