Why Was Xi Jinping Not At COP26? China Gives Bizarre Reason For Leader's No-show

Amid intense speculation over Chinese President Xi Jinping’s absence at the COP26 summit at Glasgow, China on Tuesday alleged that the conference organisers did not provide a video link for him to address the meeting, prompting him to send a written statement instead. 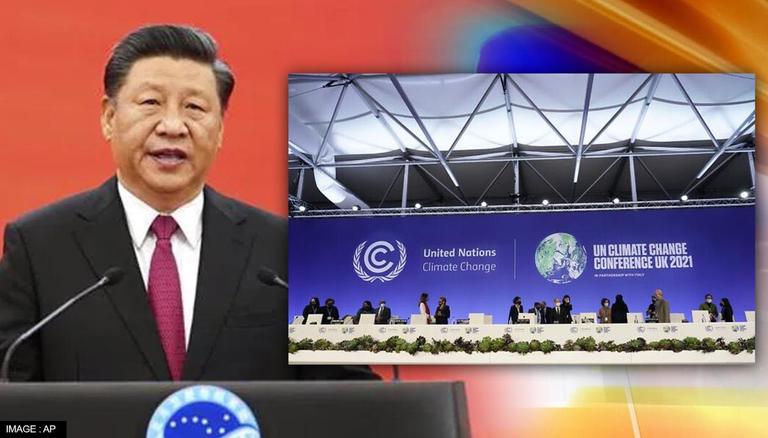 
Amid intense speculation over Chinese President Xi Jinping’s absence at the COP26 summit at Glasgow, China on Tuesday alleged that the conference organisers did not provide a video link for him to address the meeting, prompting him to send a written statement instead.

Xi, who skipped the World Leaders Summit at the 26th session of the Conference of the Parties (COP26) to the United Nations Framework Convention on Climate Change in Glasgow, sent a written statement to highlight China’s stand on the climate-related issues.

In his written statement to the COP26, he called on all countries to take "stronger actions" to jointly tackle the climate challenge and proposed a three-pronged plan of reaching multilateral consensus, focusing on concrete actions and accelerating the green transition to reduce carbon emissions.

Asked why he chose to send a written statement at the COP26 summit instead of addressing via video link, Chinese Foreign Ministry spokesman Wang Wenbin told a media briefing in Beijing on Tuesday that, “As I understand it, the conference organisers did not provide the video link method".

Xi, 68, has not travelled out of China ever since he returned from his official visit to Myanmar in the middle of January, 2020, which is largely attributed to the coronavirus outbreak.

Instead, he has been addressing global events through video links. On October 30, he addressed the G20 summit in Rome through a video link.

Xi’s absence also sparked speculation that he would like to avoid any close door negotiations relating to the pledges on the targets related to China's carbon emissions.

The absence of the top leader from China, which is the largest emitter of greenhouse gases besides the US, sparked off speculation about Beijing’s climate commitment amid official media reports it is seeking to link climate cooperation to the improvement of strained ties with the US.

Ahead of the COP26 summit, China has submitted its updated emissions reduction commitment, known as Nationally Determined Contributions (NDCs), to the United Nations last Thursday, which climate activists termed as modest and said it failed to improve China's ambition by much.

The previous goal to increase China's share of non-fossil fuels in primary energy consumption has been raised from 20 per cent to 25 per cent.

China also aims to reduce carbon intensity, measured as emissions per unit of GDP, by 65 per cent on 2005 levels, another five per cent increase on its 2016 pledge.

The country also aims to increase its forest stock volume by six billion cubic metres, up from its previous target of around 4.5 billion.

Installed wind and solar capacity will more than double, from last year's 535 gigawatts to 1,200GW by 2030, according to the documents published on the website of the UN Framework Convention on Climate Change (UNFCCC).

In his written address to the COP26, Xi said, "I hope all parties will take stronger actions to jointly tackle the climate challenge and protect the planet, the shared home for us all," he said in his statement which was released here.

The adverse impacts of climate change have become increasingly evident, presenting a growing urgency for global action, he said.

Xi made a three-pronged proposal to address the climate challenge, including upholding multilateral consensus, focusing on concrete actions, and accelerating the green transition.

"When it comes to global challenges such as climate change, multilateralism is the right prescription," Xi said.

The UN Framework Convention on Climate Change and its Paris Agreement provide the fundamental legal basis for international cooperation on climate.

Parties need to build on existing consensus, increase mutual trust, step up cooperation and work together to deliver a successful COP26 in Glasgow, he said.

Parties need to honour their commitments, set realistic targets and visions, and do their best according to national conditions to deliver their climate action measures, Xi said.

He stressed the responsibility of developed countries in tackling climate change, saying that they should not only do more themselves but should also provide support to help developing countries do better.

He added that China will speed up the green and low-carbon energy transition, vigorously develop renewable energy, and plan and build large wind and photovoltaic power stations.

China, the world's largest carbon emitter, has recently released an action plan for carbon dioxide peaking before 2030, as well as a document titled "Working Guidance For Carbon Dioxide Peaking And Carbon Neutrality In Full And Faithful Implementation Of The New Development Philosophy."