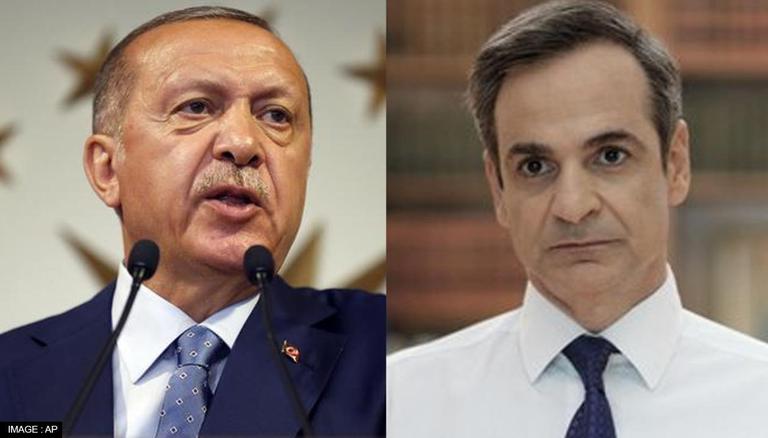 
Turkish President Recep Tayyip Erdogan on Thursday, 11 November accused Greek Prime Minister Kyriakos Mitsotakis of “lying” about the refugee crisis. According to Xinhua report, during a joint press conference with the visiting Hungarian Prime Minister Viktor Orban, Erdogan said, “It is truly ingratitude to say that the refugee crisis is caused by Turkey.” The Turkish President also added that it is Greece that pushes the refugees to their deaths in the Mediterranean and Aegean Seas.

Erdogan’s remarks came after Greek PM said on Tuesday that Athens intercepted boats coming from Turkey but refused the claims that his government pushed back the refugees. Mitsotakis said, “So rather than blaming Greece, you should put it on those who have been instrumentalising migration systematically.” The war of words between both the nations come in the backdrop of thousands of refugees are gathering on the Belarusian side of the border in an attempt to enter Poland and then Germany to seek asylum.

On Wednesday, Turkish Foreign Minister Mevlut Cavusoglu reportedly discussed the issue of migrants with his Polish counterpart, Zbigniew Rau, on the phone. On Thursday, Erdogan, as per Hurriyet Daily News, said that “It is Greece that is condemning refugees to death by skewering their boats” and added, “We have all the documents.” Turkish President even said that in its entirety, Greece had “turned into a US military base” referring to United States military deployments in the northern region of Greece.

Additionally, in the same press conference, Orban underscored the need for a defensive perimeter across Europe and noted that the continent was under migration pressures from the Mediterranean, Western Balkans and Belarus. Hungarian PM said that Europe was in need of allies and added that if such a perimeter is not established, the continent would be in a “difficult situation”. He reportedly said, “We should help our Turkish friends on migration. The EU should support Turkey as much as possible.”

As per Hurriyet Daily News, Turkey is already housing four million refugees which is the most number of migrants in the world, amid signs that a new wave of Afghan refugees might head towards Turkey and the EU. Erdogan also said that he discussed bilateral relations with the Hungarian counterpart.