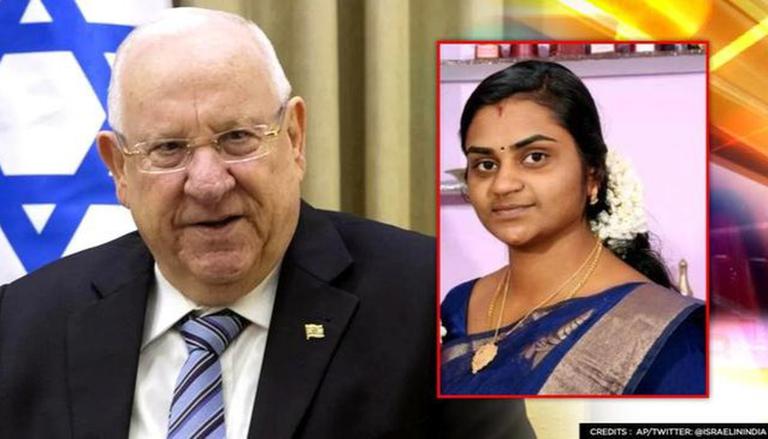 
Israeli President Reuven Rivlin on Friday praised the "generosity and kind-heartedness" of Indian caregiver Soumya Santosh who was killed in a rocket attack by Palestinian terrorists on May 11.

The 30-year-old professional caregiver from Kerala's Idukki district was attending to an old woman at a house in Ashkelon. On the night of May 11, she was talking to her husband in India via video call when a rocket fired from Gaza hit the house where she was working.

Expressing condolences over Soumya’s demise, President Rivlin said he hopes her family would find comfort in her "generosity and kind-heartedness.”

"President of Israel Reuven (Ruvi) Rivlin spoke earlier this week with the family of Soumya Santosh, an Indian citizen working as a caregiver in Israel, who was killed in rocket fire on Ashkelon on Tuesday May 11. Speaking to the family of Soumya, the President told her husband Santhosh, who is in India with their nine-year-old son, that, I hope you find comfort in the love, the generosity and the kind-heartedness she gave to others in need," a statement from the Presidency said on Friday.

On behalf of the State of #Israel and its people I told Soumya Santosh's husband Santhosh I hope he finds comfort in the love, the generosity and the kindheartedness she gave to others in need.
I thank PM @narendramodi
and the people of #India for their support for Israel.

Santhosh is said to have thanked the President for "his warm embrace and Israel for helping to expedite the transfer of his wife’s mortal remains to India for burial".

“The President also thanked Prime Minister Narendra Modi and the people of India for their support to Israel," the statement added.

India calls for peace between Israel and Palestine

India, during the UN General Assembly meeting on the violence in the Middle East, underlined that every effort should be made to create conducive conditions for the resumption of direct talks between Israel and Palestine, emphasising that meaningful negotiations will go a long way in establishing lasting peace and stability in the region.

After 11-days of bombarding rockets into each other’s territories, Israel and Palestinian terrorist group Hamas, which control the Gaza strip, announced a ceasefire. Both Israel and Hamas claimed victory in the conflict. The truce began early on Friday, bringing to an end 11 days of fighting in which more than 250 people were killed, most of them in Gaza.