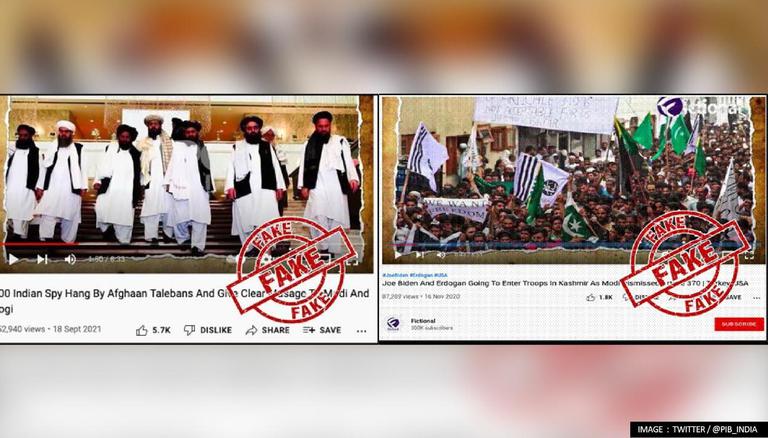 
Ministry of Information and Broadcasting on Tuesday, December 21, issued a ban on 20 YouTube channels and 2 websites with concerns over the circulation of fake news on the internet. The Ministry has urged the Department of Telecom to direct the internet service providers to block news channels and portals.

According to inputs from intelligence agencies, a coordinated disinformation network is operating the channels and websites from Pakistan. The ban on the same was ordered as they intended to spread misinformation over various sensitive subjects related to India including Kashmir, the Indian Army, minority communities in India, Ram Mandir, General Bipin Rawat, and more.

The Punch Line- The Youtube channel discussed fake information regarding Prime Minister Narendra Modi's governance and the Indian Army movement in the Jammu & Kashmir region. The channel has 1,16,000 subscribers and its content has been viewed by 2,01,31,840 users.

International Web News- The platform is misused by posting false content like India sponsoring terrorism. 1,14,000 people have subscribed to the channel and 1,50,46,007 have viewed the same.

Khalsa TV- The channel that has 698 subscribers and 27,419 viewers, promoted fake content related to the Sikh community.

The Naked Truth- The channel posted videos with false information related to the Indian Army's activity in the J&K region. It also shared irrelevant content concerning PM Modi, Amit Shah, and other ministers. The banned Youtube channel has been subscribed by 4,61,000 people while 8,89,71,816 individuals have viewed the content.

News24- The channel was blocked as it shared fake news concerning Israel, the Sikh community, and China. There is no data available on subscribership while it has been viewed by 2,36,781people.

48 News- The YouTube channel was blocked as it posted fake news with the title 'fake military operations in India', as well as on China-India relations and Joe Biden-related international news. The videos have 2,40,56,799 viewers.

Fictional- The channel that has 3,00,000 subscribers and 4,01,51,199 viewers, highlight fake information concerning Babri Masjid and Afghanistan.

Punjab Viral- There is no data available on subscribers count while the blocked channel has been viewed by 14,80,000. The channel promotes fake information concerning  Khalistan Movement, Sikh Community, Kashmir and Taliban threat to India.

Naya Pakistan Global- Govt has ordered to ban this channel as it has posted fake content related to Ram Mandir and the Indian Army. 7,76,000 people have subscribed to the channel and 9,68,44,208 have viewed its contents.

Cover Story- The channel that has no subscribers and 19,51,199 viewers, shares content that is factual false concerning the Indian Army and the US.

Go Global eCommerce- The channel was blocked as it shared fake news related to India's relationship with China and Pakistan. 12,200 people have subscribed to the channel and 4,50,000 have viewed the same.

Tayyab Hanif- The Youtube channel discusses fake information concerning Indo- Russian relationships and the Indian Air Force. Information on subscribers is undisclosed and the fake content has been viewed by 8,04,112 users.

Zain Ali Official- The channel was blocked as it shared fake news related to Indian Air Force and Bipin Rawat's take on China. 1,39,000 people have subscribed to the channel and 1,54,58,170 have viewed the same.

Mohsin Rajput Official- Govt has ordered to ban this channel as it has posted fake content related to Tamil Nadu's IAF air crash, Article 270, and the Indian Army. No one has subscribed to the channel while 17,76,473 have viewed the same.

Kaneez Fatima- The platform is misused by promoting fake news among 5,24,417 viewers regarding Afghanistan and Taliban.

Sadaf Durrani- The YouTube channel was blocked as it posted fake news on Modi's visit to Kashmir, and Pakistan attacks on Rajasthan borders. The videos have 18,33,054viewers.

Mian Imran Ahmad- The channel was blocked as it shared fake news related to India's relationship with China and Pakistan. 36,000 people have subscribed to the channel and 35,81,132 have viewed the same.

Disruption of Elections on agenda: Centre

Elaborating on the crackdown, the Centre stated that over the last year, Pak-sponsored YouTube channels were posting contentious content over issues such as the farmers’ agitation, protests related to the CAA, in a bid to 'incite the minorities' against the Government of India. It was also feared that the aforementioned platforms would be used to share content to undermine the democratic process of the upcoming elections in five states.