Pakistan on Sunday, issued a press release stating that the inclusion of Gilgit-Baltistan and Azad Jammu and Kashmir (known as PoK) is incorrect and void

Spooked by India's newly released political map, Pakistan on Sunday, issued a press release claiming that the inclusion of Gilgit-Baltistan and Azad Jammu and Kashmir (known as PoK) is incorrect and void. Pakistan alleged that the new map was in violation of the relevant United Nations Security Council resolutions and rejected the political maps. The press release claimed that the 'disputed' status of J&K cannot be changed by the Indian government.

"We reiterate that no step by India can change the 'disputed' status of Jammu and Kashmir recognized by the United Nations. Pakistan will continue supporting the legitimate struggle of the people of Indian Occupied Jammu and Kashmir for exercising their right to self-determination in accordance with the relevant UN Security Council Resolutions," stated the press release. 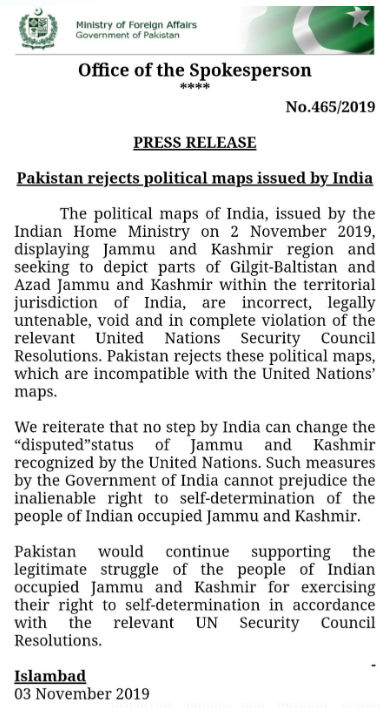 Similarly, China objected to the bifurcation of Jammu and Kashmir into two union territories as "unlawful and void". It said that India's decision to "include" some of China's territory into its administrative jurisdiction "challenged" Beijing's sovereignty, according to PTI. China had raised similar concerns after the revocation of Article 370  on August 5. Meanwhile, India has pointed out that China continues to occupy a major area in Jammu-Kashmir and Ladakh.