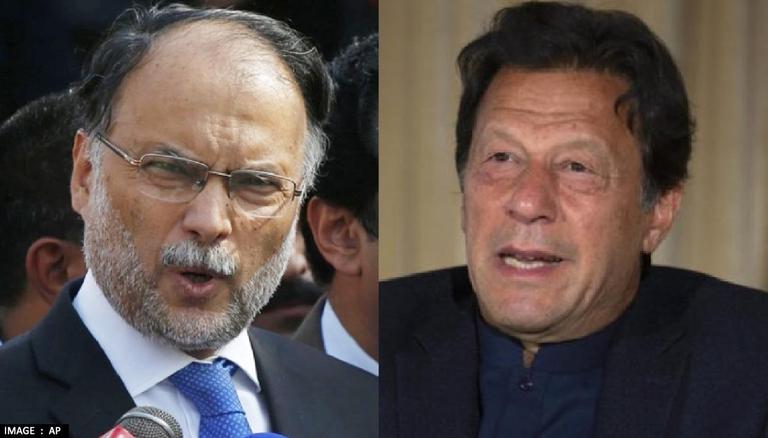 
After the shocking release of the Pandora Papers that included names of major world leaders, including close associates of Pakistan Prime Minister Imran Khan, Opposition leader and Pakistan Muslim League-Nawaz (PML-N) Secretary-General Ahsan Iqbal Iqbal demanded the resignation of country's premier. As per The Nation report, while addressing a press conference, PML-N Secretary-General said that Pakistan PM should resign as his name has already appeared in the Toshakhana case and it would also appear in the Pandora Papers.

"After Imran Khan's name surfaced in Pandora leaks, there is no moral justification for him to retain the post of the premier," Iqbal said.

The stunning leak of Pandora Papers exposed the secret wealth and dealings of leaders, politicians and billionaires  across the globe, in one of the biggest leaks of financial documents. From Russian President Vladimir Putin’s secret assets in Monaco to Czech Prime Minister Andrej Babis failing to declare an offshore investment company used to buy villas in France, the Pandora Papers also revealed the names of 700 Pakistani individuals and members of Pakistan Prime Minister Imran Khan’s inner circle, including cabinet's ministers.

In the latest blow for the Imran Khan-led government, the documents have revealed the cabinet members in Pakistan and their families who have secretly owned a massive range of companies holding millions of dollars in hidden wealth, stated International Consortium of Investigative Journalists (ICIJ). As the Pakistani political scene is rocked by the recent revelations, PML-N Secretary-General said that Khan’s Pandora box is about to open.

The #PandoraPapers offer insights into why governments and global organizations have made little headway in ending offshore financial abuses. https://t.co/5JF4u2V4eN pic.twitter.com/IF7VEiBhFz

According to The Nation, Iqbal also said that Pakistan PM, who has touted his leadership and hailed his anti-corruption campaign, was hiding facts himself on an array of facts including details of foreign gifts. He has also blamed Khan for the increase in Pakistan’s inflation which is stemmed from the poor policies of his government. PML-N Secretary-General was quoted as saying, "Today a person who earns Pakistani Rs 25,000 to Rs 30,000 a month cannot bear the expenses of his household honourably."

Who are the Pak ministers mentioned in Pandora Papers?

Among Khan’s cabinet members, whose holdings were exposed in the Pandora Papers, include his foreign minister Shaukat Fayaz Ahmed Tarin and his family and the son of Pak PM’s former adviser for finance and revenue, Waqar Masood Khan. It has also revealed the offshore dealings of a top donor of the ruling Pakistan Tehreek-e-Insaf (PTI), Arif Naqvi. The ICIJ has also noted that Naqvi is presently facing fraud charges.

Meanwhile, in the first reaction to the Pandora Papers, Imran Khan took to Twitter on 3 October and not only welcomed the revelations but noted that his government will investigate all Pakistani citizens. Khan said, “We welcome the Pandora Papers exposing the ill-gotten wealth of elites, accumulated through tax evasion & corruption & laundered out to financial "havens.”

“My govt will investigate all our citizens mentioned in the Pandora Papers & if any wrongdoing is established we will take appropriate action. I call on the international community to treat this grave injustice as similar to the climate change crisis,” said Pakistan Prime Minister in a Twitter thread on Sunday.

If unchecked, inequalities between rich & poor states will increase as poverty rises in the latter. This in turn will lead to a flood of economic migration from the poor to the rich states, causing further economic & social instability across the globe.

WE RECOMMEND
'Pakistan as big a threat as Taliban': Belgian Senator Filip Dewinter
Pakistan: Newlyweds hop on JCB to arrive at wedding venue in style; Netizens surprised
Pakistan to hold talks with IMF concerning next tranche of $6BN loan program
As Pakistan PM negotiates with banned TTP, defence experts warn Islamabad to be cautious
Pakistan's Umar Akmal mocked by fans as he flies off to US for 'personal meetings'