According to the state-run telecom giant, Huawei 5G AAU and SPN technologies have been applied near about the China-Nepal border, with its north part in Tibet.

The world’s highest-altitude base station at about 6,500 meters above sea-level north of Mount Everest now has the ultrafast 5G signals coverage on “the highest peak of the world”. Organizers, China Mobile Hong Kong (CMHK), and Huawei started operations after they installed the world’s highest 5G communication towers in the remote region of Tibet. CMHK announced to the world that it successfully operated its dual Gigabit network and “8K live broadcasts on 5G network” was not a dream anymore in its official press release on the website.

According to the state-run telecom giant, Huawei’s 5G AAU and SPN technologies have been applied near about the China-Nepal border, with its north part located in Xigaze prefecture of Tibet Autonomous Region, state media reports confirmed. The network is maintained by network specialists stationed 24/7 at the altitudes of 5,300 meters and above.

“Technology means to make the world better.  The beauty of Mount Everest can be displayed via 5G high-definition video and VR experience, which also provides further insights for mountaineers, scientists and other specialists into the nature. The ground-breaking establishment on Mount Everest once again proves that 5G technology connect mankind and the Earth harmoniously,” Huawei said in a statement on its official site. Read: WHO 'keen' To Investigate Origin Of Coronavirus On Invitation From China

As of April 30, on the occasion of the 60th anniversary of the summit, the Chinese mobile companies announced the deployment and installation of its 5G AAU, which they claimed, is highly integrated into a compact size, according to reports. Further, they claimed that the 5G fits particularly well for infrastructure in extreme environments such as Mount Everest. A unique network, which is “stand-alone plus non-stand alone” (SA+NSA) mode connects five 5G at the base stations. Meanwhile, Huawei’s Massive MIMO with three-dimensional narrow beams and SPN technology makes lightning speed and large bandwidth possible, as per Huawei's statement. 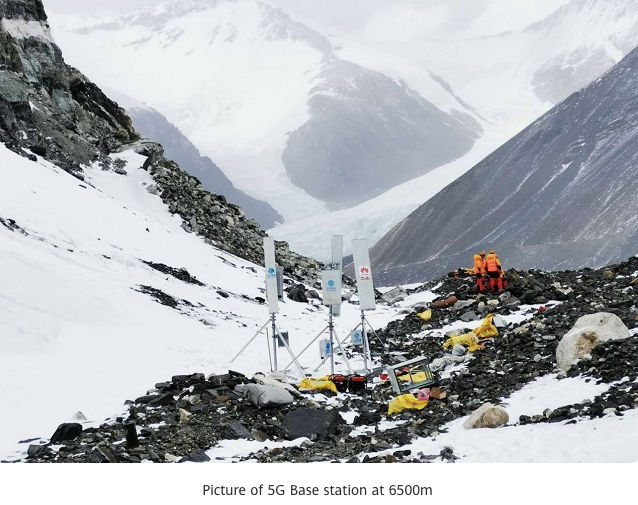 At an altitude of 5,300 meters, the 5G download speed exceeded 1.66 Gbps, where the upload speed tops 215 Mbps, Huawei said. Chinese telecom equipment giant deployed other technologies like Intelligent OptiX Network and HoloSens intelligent video surveillance system in its successful project. Not just that, with a 200G ultra-high-speed transmission platform, “Huawei ensures streaming quality with the capabilities of optimization and fault locating with just one click, keeping the networks always on even at the altitude of 6,500 meters at the summit of Everest.”