As a part of her farewell visit to European states, outgoing German chancellor Angela Merkel landed in Israel on Saturday, according to Times of Israel. 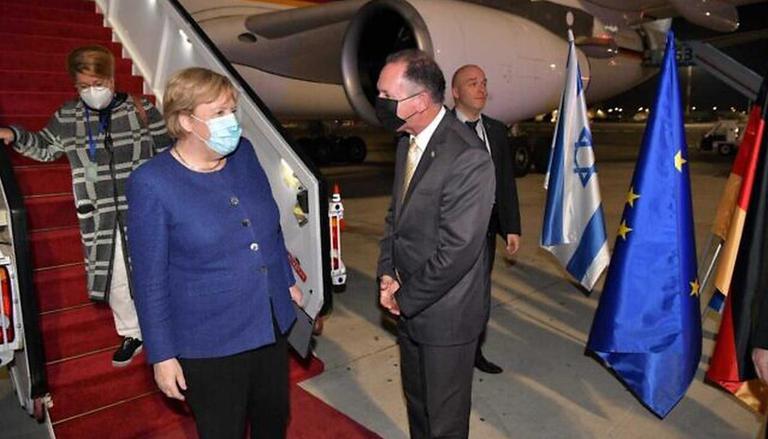 
As a part of her farewell visit to European states, outgoing German chancellor Angela Merkel landed in Israel on Saturday. According to Times of Israel, Europe’s longest-serving leader was greeted by top Israeli officials at the Ben Gurion Airport, located 20 kilometres from Tel Aviv. Since taking office in 2005, the German leader has bolstered her country’s ties with Israel, specifically working to mitigate the effects of the holocaust.

In 2008, Merkel created headlines after she addressed the Knesset and expressed shame over the Nazi holocaust. On the economic front, it was under her administration that Israel grew to become Germany’s largest trade partner. At Present, both countries are full members of the Organisation for Economic Co-operation and Development and the Union for the Mediterranean. However, despite her centre right ideology, Merkel has expressed support for the Palestinians.

Merkel is currently leading a caretaker government following national elections until a new government is formed. As a part of her two day trip, she is scheduled to hold talks with the Israeli cabinet, visit holocaust memorial Yad Vashem and meet  Israeli high-tech leaders and entrepreneurs. Additionally, the 67-year-old trained physicist is also to receive an honorary doctorate from Haifa’s Technion — Israel Institute of Technology.

Last briefings and preparations with my embassy staff for the visit of Chancellor Angela #Merkel in Israel – looking forward to a rich program that will strengthen our unique 🇮🇱-🇩🇪 relationship. pic.twitter.com/imijglelT2

Back at home, Merkel supervised the end of military conscription, the transition to a future free of nuclear and fossil-fuel power, the legalisation of same-sex marriage, the establishment of a national minimum wage, and rewards encouraging fathers to care for young children, among other things, during her 16 years at the helm of Europe's largest economy.

Merkel passed her first challenge in 2008, when she promised that Germans' savings would be protected throughout the global financial crisis. She was a key participant in the effort to salvage the euro currency from the debt crisis that overtook numerous countries in the following years, agreeing to bailouts but demanding significant budget cutbacks.

As refugees fleeing wars in Syria and elsewhere travelled across the Balkans in 2015, Merkel was the face of a friendly approach to immigration. Hundreds of thousands were allowed in, and she vowed that “we will manage” the influx, but she faced opposition at home as well as among European partners.