As Taliban Re-conquers Afghanistan, Posters Of Women Seen Being Whitewashed In Kabul

Shortly after the Taliban insurgents breached the Afghanistan capital Kabul on Sunday, the advertising posters showing women were seen being painted over. 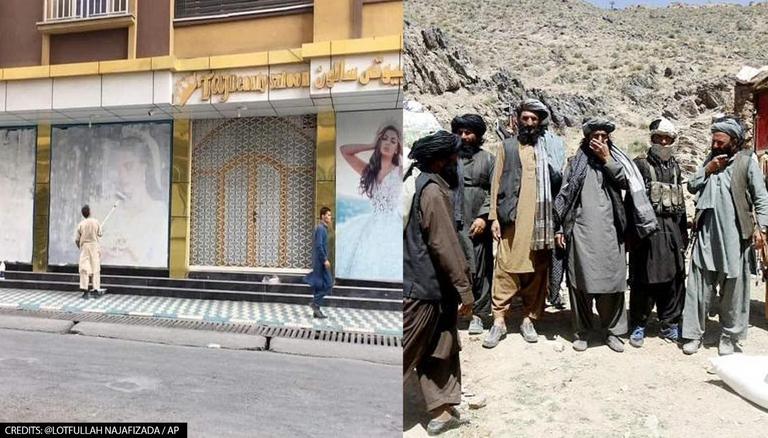 
Shortly after the Taliban insurgents breached the Afghanistan capital Kabul on Sunday, advertising posters showing women were seen being painted over, further confirming what many feared would happen if the Taliban succeeds in its conquest - a return to the days of horrific oppression of women. Earlier, in a breaking development, it was informed that Afghanistan President Ashraf Ghani will tender his resignation as the government has surrendered to the Taliban forces which reached Kabul on Sunday.

Following talks between the Afghan government and Taliban negotiators, an interim government led by the Taliban has been announced. The new Afghanistan government reportedly be led by top Taliban leader Mullah Abdul Ghani Baradar.

As the Taliban had  started to re-capture the country of Afghanistan, the insurgents had  already started resuming  regressive practices against women. According to a report by the Associated Press, after Taliban's takeover, the women are not being allowed to go out to the markets without a male escort, reveal their ankles, or to  step out of their homes to work. For those who saw Taliban rule before 2001, these diktats serve as a stark reminder of the time when women were not allowed to study and work. The Taliban in the past has also carried out public executions, chopped off the hands of thieves and stoned women accused of adultery.

"The Taliban instructs all its forces to stand at the gates of Kabul, not to try to enter the city. Till the completion of the transition process, the security of Kabul city must be maintained. We do not intend to take revenge on anyone, all those who have served in military and civilian sectors in the Kabul administration are forgiven and safe. All should stay in their own place and home and not try to leave the country," stated the Taliban.

Following that, Afghanistan's Acting Interior Minister, Abdul Sattar Mirzakwal, had said that Kabul will not be attacked by the Taliban and the transition of power will happen peacefully, thereby confirming that the government had surrendered. He had also assured the residents that the security forces will ensure the security of the city.

The fall of Mazar-e-Sharif - a heavily defended city on Sunday morning sent the Afghanistan crisis spinning out of control. With control over Mazar-e-Sharif, the Taliban confined the Ashraf Ghani-led government to the centre and east. Given this major leverage, the nation failed to protect its capital. The militant group took over all border posts leading to Kabul, leaving only Kabul airport as the remaining exit from the war-torn nation. Helicopters were seen landing at the US Embassy in Kabul as diplomatic vehicles began to leave the compound after destroying sensitive documents.

READ | The Latest: Czech diplomats to be evacuated to Kabul airport

WE RECOMMEND
Afghanistan: Taliban has breakfast at Governor House after taking over Jalalabad
Afghanistan: Shot for not wearing veil, women dread their future as Taliban returns
Afghanistan Govt offers Taliban power-sharing deal to end fighting in the country
Who are the Taliban? How did it start ruling Afghanistan? When did US troops enter?
Taliban warns India against military presence in Afghanistan, discusses links with Pak