Australia on Monday formally embarked on a widely-contested programme to enhance its navy with nuclear-powered submarines in new defence alliance, AUKUS. 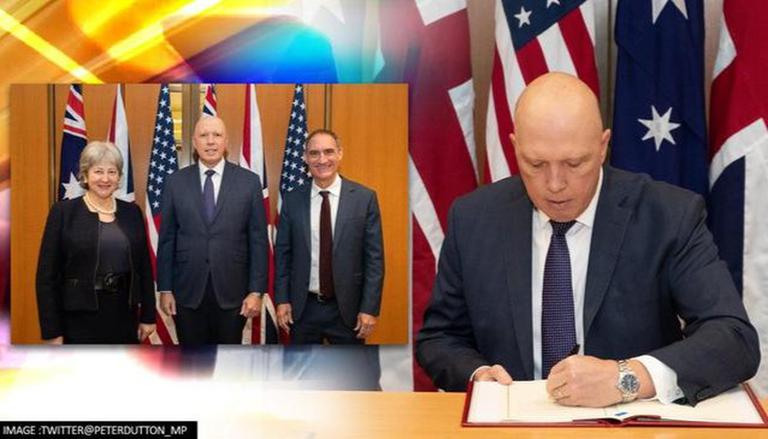 
Australia on Monday, November 22 formally embarked on a widely-contested programme to enhance its navy with nuclear-powered submarines in the new defence alliance with the UK and the United States, AUKUS. Australian Defence Minister Peter Dutton joined American and British diplomats in signing the ‘AUKUS Exchange of Naval Nuclear Propulsion Information Agreement’ that formalises Canberra’s access to the “highly sensitive” nuclear submarines. Dutton took to Twitter and shared images while signing the agreement and along with the United States Chargé d’Affaires Michael Goldman and UK High Commissioner Victoria Treadell.

Notably, it is the first agreement on the technology to be publicly signed since Australia, the UK and the United States announced the AUKUS defence alliance in September in a bid to confront strategic tensions in the Pacific where China-US rivalry is growing. Ahead of Dutton’s signing, US President Joe Biden said in a statement on Friday, “The agreement will permit cooperation, which will further improve our mutual defence posture.”

Under the AUKUS deal, Australia would be getting eight nuclear-powered submarines that are capable of stealthy, long-range missions. The trilateral defence alliance also provides for sharing of cyber, artificial intelligence, quantum and unspecified undersea capabilities. However, AUKUS drew a global reaction along with criticism from France and anger from China. Beijing described the pack as an “extremely irresponsible” threat to stability in the region.

AUKUS majorly drew criticism from France, which London said it discovered at the last moment, that its separate diesel-electric submarine contract with Australia worth $65 billion was scrapped. Despite the backlash, Australian Prime Minister Scott Morrison has appeared to be unapologetic about handling AUKUS and emphasised that it was in Canberra’s interest. Australian PM also said that he was aware the defence pact would “ruffle some feathers.”

Meanwhile, the UK has also moved to rectify its strained relations with France over AUKUS. The Sunday Times stated that UK Prime Minister Boris Johnson wants to work on signing a new “Entente Cordiale” (Cordial Agreement) between the two countries in order to enhance ties with France.

WE RECOMMEND
US: Five dead, more than 40 injured after SUV plows into Christmas parade in Wisconsin
US, UK agree to exchange 'naval nuclear propulsion information' with Australia: WH
US: America’s top defense official vows to prevent Iran from obtaining a nuclear weapon
US: Man who pleaded guilty to rape, sexual assault of 4 teenage girls gets no jail time
US, Canada agree to launch 'strategic dialogue' to align approach on China & Indo-Pacific