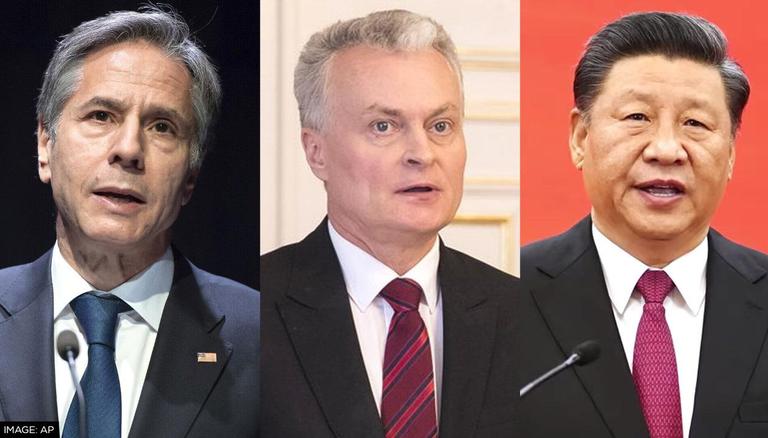 
US Secretary of State Antony Blinken and the representatives of the Bucharest Nine group on Monday, Jan. 3 expressed their solidarity with Lithuania amid the escalating “political pressure and economic coercion” by China, according to ANI. In a statement on Monday, State Department spokesperson Ned Price said that Washington and the Foreign Ministers of various countries included in the Bucharest 9 group were standing in support of Lithuania and were ready to "deter” any People's Republic of China’s coercive moves.

China had drawn down the diplomatic relations with Lithuania and had removed the Baltic nation from the customs registry in retaliation for the opening of the de facto embassy under the name ‘Taiwan’ in its capital Vilnius. Self-ruled democratic island Taiwan is being claimed by China as its own ‘breakaway province’ and China threatened to use force against the ‘independent’ forces. A bilateral spat between Beijing and Lithuania intensified as Lithuania took steps to strengthen ties with Taiwan. Lithuania has been unable to clear its goods through the Chinese customs as PRC scrapped its name from customs record and scores of Lithuanian products were barred from entering Shanghai port.

Lithuanian wood exporters who travelled to China with over 300 containers worth of export now had their products floating in the sea in limbo. Lithuania urged for the support of the West, and the US to counter Chinese aggression. The country found itself at the forefront with other foreign powers that identify China as the greatest threat, according to Hong Kong Post. As China levelled its diplomatic relations with Lithuania, it demanded that Lithuanian officials surrender their identity documents, following which, the Lithuania side withdrew its diplomats from China in mid-December. China had also earlier expelled the Lithuanian ambassador indicating the seriousness of the matter.

In a diplomatic breakthrough, Taiwan opened a de facto embassy in Lithuania. The island announced on Thursday that it had formally inaugurated the office in the Baltic nation which is also the first in Europe in 18 years. Taiwan’s Foreign Ministry had said that opening the “Taiwan Representative Office in Lithuania” would “charter a new and promising course” for joint ties.” It also noted the huge potential for cooperation, particularly in the tech sector. The ministry said, “Taiwan will cherish and promote this new friendship based on our shared values.”