Canada: Queen Victoria Statue Toppled Amid Outrage Over The Discovery Of Unmarked Graves 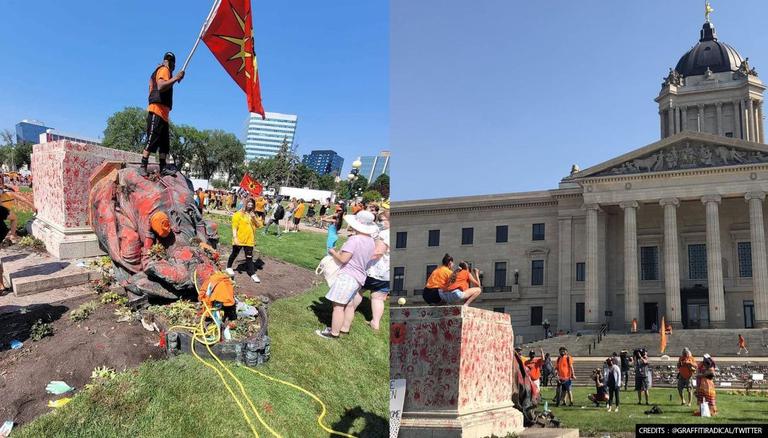 
Angry crowd of demonstrators toppled the statue of Queen Victoria to the ground off its base on the front lawn of the Manitoba Legislative Building in Winnipeg, Canada, according to the visuals that emerged late Thursday. In the declaration of their rage brought by the impact of the recent discovery of 182 unmarked graves in British Columbia and Saskatchewan with remains of Indigenous children aged between seven and 15, a large mob pulled the monument from the pedestal base.

The crowd rallied at an Every Child Matters walk on the Canada Day (observed on July 1) against the country’s residential schools system. It daubed the statue, unveiled in 1904, in red hand prints and smears. The historical monument was built during Queen Victoria's Diamond Jubilee. The monarch had reigned the country when the treaties for the residential school system were negotiated by the First Nations and the federal government. The monument was designed by British sculptor George Frampton and it depicts the queen seated on throne and displaying an orb and a scepter, seen as two of the most authoritative monarchical symbols.

A statue of Queen Elizabeth II was also torn down that had stood east side of the grounds near Governor Janice Filmon’s House. People then climbed atop the downed statues, while several others shot images.

READ | Is Canada Day a holiday in the country? See details about the day and holiday

Winnipeg police force was summoned at the scene, and at least one person was taken into detention on Legislative Grounds regarding a disturbance. Although it appears that the person taken into custody was indulged in a brawl attempting to stop the revolting, largely indigenous mob from destroying the statue that they had tied a long rope to at the time, wrapped around the front. A probe was ordered by the police, according to the local press reports. A spokesperson for the police department told reporters that enforcement action will be taken at some point, in the near future.

READ | What is Canada Day 2021? Know the history, significance and more about this day

Addressing Canadians, PM Justin Trudeau said, “If this difficult time has taught us all one thing, it’s that in times of challenge or crisis Canadians are there for one another,” he said. “We’ve all helped our communities stay safe and healthy.”

Canada Day on July 1 toned down the celebratory fervour, as the country in its entirety reflected on the way it has and continues to treat the indigenous population,  immigrant Canadians, and Indian communities after the residential school incident, a system that began operating in the 1880s with last of them closing down as early as 1996. The system forcibly snatched Indigenous children from their families and put into these schools where they were forbidden from acknowledge their heritage and culture, and prohibited to speak in their own languages.

Indigenous children were subjected to physical, sexual, emotional, and psychological abuse if they broke the rules that concentrated in “civilising” Indigenous peoples. As many as 150,000 First Nations, Inuit, and Metis children were confined in these conditions, which the historians have dubbed as “cultural genocide”. As many as  4,100 children succumbed in these systems that reflect on the past’s harrowing realities.

WE RECOMMEND
What is a heat dome? Canada's extreme weather explained as heatwave shatters records
Happy Canada Day 2021: Here's why it is celebrated on July 1
Canada: Video of 'desi street fight' outside mall goes viral on social media | WATCH
Forward Ayo Akinola switches to Canada from United States
Pope to meet with Canada indigenous amid demands for apology