Visuals from Afghanistan show civilians protesting against the Taliban in support of the Northern Alliance after former VC Amrullah Saleh challenged the group. 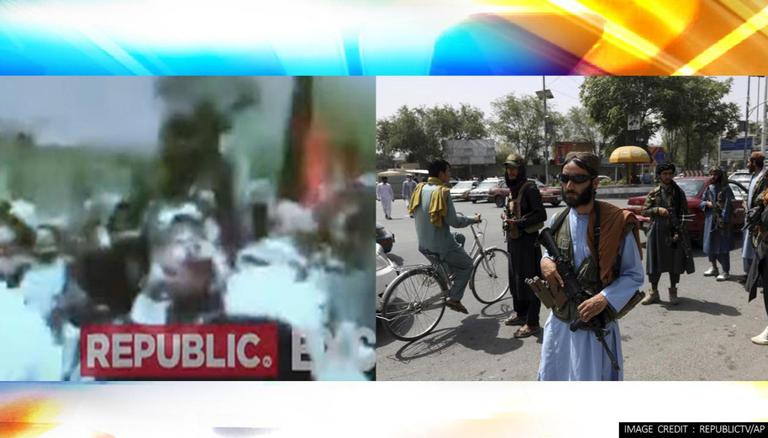 
In a recent development from Afghanistan, several Afghan civilians were seen taking to the streets demonstrating against the Taliban. The civilians came in support of the Northern Alliance and former Vice President Amrullah Saleh, who has challenged the terrorist group. It has been reported that around 300 Talibs were killed in heavy fighting in Andarab.

The protests show people's unity against the Taliban's takeover. Also, civilians joining the Northern Alliance is further strengthening the anti-Taliban movement. Furthermore, Amrullah Saleh, who pronounced himself as the President of Afghanistan, has directly challenged the Taliban. As a result, movements of resistance are being witnessed from Panjshir and Kapisa.

According to Republic TV's exclusive report, heavy fighting is currently ongoing in the area and it has been reported that around 300 Talibs are already killed in the attack in Andarab. The escalations in resistance against the terrorist group have also been witnessed from Kapisa located in North-East Afghanistan.

Earlier, Afghanistan's 'caretaker' President Amrullah Saleh on Sunday warned the Taliban to avoid entering Panjshir province as it was guarded by the National Resistance Front - led by Ahmad Massoud. Reminding the terror group of its casualties in Andarab Valley, Saleh irked the Taliban saying "some terrains are to be avoided". Saleh, who was Ashraf Ghani's vice-president, is currently in Panjshir province and has now been launching an anti-movement with full power.

Earlier, hundreds of people including numerous Afghan citizens were seen protesting against the Taliban in Greece. They were holding rallies and flags demanding the removal of the Taliban from Afghanistan. Also, visuals of protests from different provinces across Afghanistan surfaced showing people taking to the streets while holding Afghanistan's national flag, which was taken down by the Taliban after they seized control of Kabul.

The country has been facing the worst-ever situation since the Taliban took over Afghanistan after its government collapsed. Since then, people have been desperately trying to leave the country fearing the deteriorating situation under the Taliban's control.

READ | Afghanistan: US warns of IS threat amid Taliban takeover, activates CRAF for evacuation

Meanwhile, the Taliban have been imposing strict restrictions against the citizens and have committed atrocities against them despite their promises of respecting women and minorities.