A video that reflects the desperation of citizens in Peru shows a crying woman running after Presidential cavalcade amid COVID-19 pandemic.

A video that reflects the desperation of Peruvian citizens shows a crying woman running after Presidential cavalcade. The incident happened in Arequipa where Celia Capira chased the president’s vehicle begging him for a hospital bed for her COVID-19 infected husband. “Mr President don’t go,” she could be heard screaming in the now-viral video.

With nearly a quarter of the population battling poverty, Peru is one of the worst-hit nations by the COVID-19. The country, which faces a massive shortage of hospital beds and oxygen, has reported over 370,000 cases and more than 17,000 deaths.

In the clip that has left netizens in tears, Capira could be seen running after the presidential cavalcade. Her tear-soaked face, covered underneath a mask reflects the grim reality of the country. According to international media reports, her husband Adolfo Mamani was kept in a tent outside the hospital where he later died on July 21.

"Mr President, you have to go to the tent, don't leave the hospital until you've seen the condition (patients) are in," yells Capira in the video as the presidential cavalcade moves away.

Extremely heartbreaking video of Celia Capira trying to get the attention of Peruvian President Martin Vizcarra to come see the grim conditions in main hospital in Lima where her husband was fighting for life from #COVID19 & he later died the same day ðŸ˜³ pic.twitter.com/muOc4imMqR

After her video went viral, the Martín Vizcarra apologised adding that he did not notice her. He also paid condolences to her dead husband. It also elicited heartfelt and emotional repsonses from people across the world. Many have also paid tribute to her late husband. 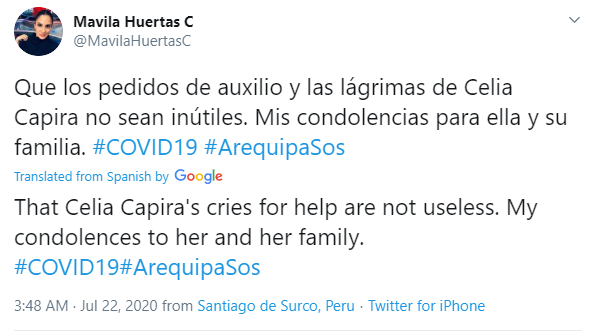 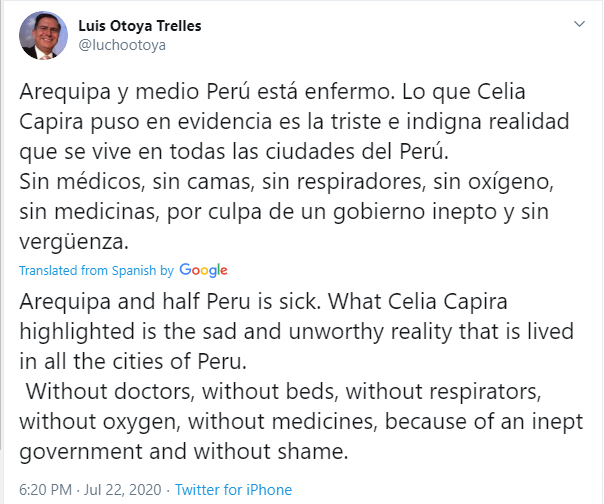 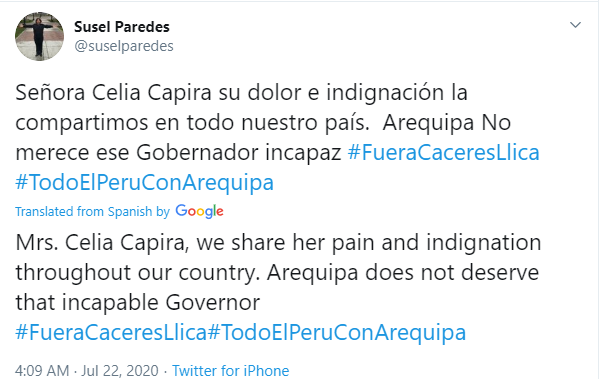